Oppo Reno 4 Pro 5G has an artist edition with paintings of sun, moon, and unicorns

Oppo Reno 4 Pro 5G was launched in China about two months back with a Snapdragon 765G processor in five colours. 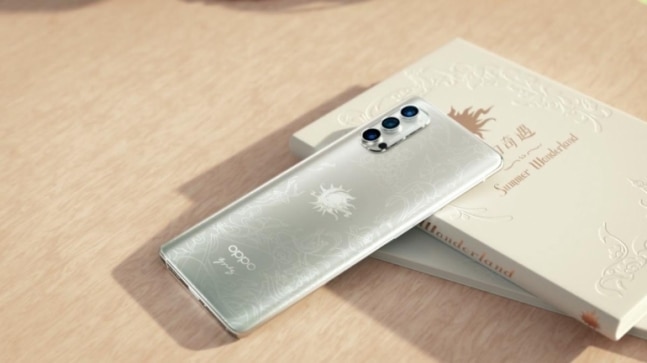 Oppo Reno 4 Pro comes in different models for different markets. The one in China has support for 5G with a Snapdragon 765G processor but the one launched in India has a Snapdragon 720G SoC that does not support 5G connectivity. Over and above these variants, there are multiple colour variants for the Reno 4 Pro. Oppo is now partnering the famous designer James Jean for a new artistic version of the Reno 4 Pro, which looks quite exquisite personally.

The Reno 4 Pro Artist Limited Edition has engravements at the back as a part of an art that depicts "Summer Carnival of Dreams". James Jean has described this theme as "an escape into a prismatic realm of adventure and discovery" on Twitter. The entire project is called Project SoleLuna, which means sun and moon in Latin. The SoleLuna logo is inscribed at the dead centre of the rear panel but what got me intrigued are the magical creatures, such as unicorns, carved out straight from the artist's imagination. The retail box of the Reno 4 Pro, along with other items in the packaging, has the same design. James Jean is a Taiwanese-American renowned artist who has collaborated with key people in designing cover art for Marvel and DC Comics. He has also designed posters for movies such as Blade Runner 2049, Mother!, and the Oscar-winning The Shape of Water. Oppo has roped in Jean for Reno 4 Pro but there is no clarity on whether he will spearhead design for upcoming Oppo products. The idea for a collaboration with top artists is becoming quite prevalent. Realme had worked with Jose Levy on the design of Realme Buds Q earlier. Jose is now the head of design at Realme.

Oppo Reno 4 Pro Artist Limited Edition is silver in colour, which is also the fifth colour in the series. The smartphone was previously available in black, white, pink, blue, and green. The latest artist edition of the Reno 4 Pro comes at a price of CNY 4,299 (roughly Rs 46,400) for the 12GB/256GB model. It will be available in China for now but Oppo may bring the variant to other markets, including India. There are no other changes that Oppo has done to the Reno 4 Pro apart from how it looks.