The Galaxy Z Flip is Samsung's second phone with a foldable screen but unlike the Samsung Galaxy Fold, which felt like a special edition device, the new Flip is a practical phone with a unique foldable glass screen. You can use it as a regular phone. These are still early days for smartphones with a foldable screen. But right now, in this early stage, Samsung is the company that is ahead of all others in making a foldable phone that you can buy and use. Last year, the company came out with the Galaxy Fold. However, it was clearly a first-generation phone of its kind. In 2020, Samsung is starting with the Galaxy Z Flip, a phone which is the world's first smart device to come with a screen made of foldable glass. That makes all the difference, coupled with a few product choices that Samsung has taken to keep the price of the Galaxy Z Fold on the lower side. The result is that the Galaxy Z Fold is a more practical, incredibly simple something that is good and relatively cheaper phone at $1399. It is coming to India soon, and you will be able to buy it as well as won't mind using it as your regular phone.

At least that is my impression based on the time I spent with the device at Samsung's Unpacked event where the company also announced the Galaxy S20, the Galaxy S20+ and the Galaxy S20 Ultra. The Galaxy Z Flip is definitely a more polished phone compared to the Galaxy Fold. The Galaxy Fold was sort of a tech demo, and because it was a sort of tech demo, Samsung crammed in it all sorts of technologies. There were like gazillion cameras in it, two big screens, a lot of battery and all the top-end hardware. The result was that the Fold was extremely expensive.

Then there was the layer on the screen, which was made of plastic. So, you have two problems: One, the phone was expensive, and two its screen, when used, didn't even feel all that premium even though under the plastic layer there was an OLED display. In its bid to create a usable foldable phone Samsung came farther than any other company in 2019. It actually sold little less than half a million Galaxy Fold phones. But there is no denying that the Galaxy Fold was a first-gen product. 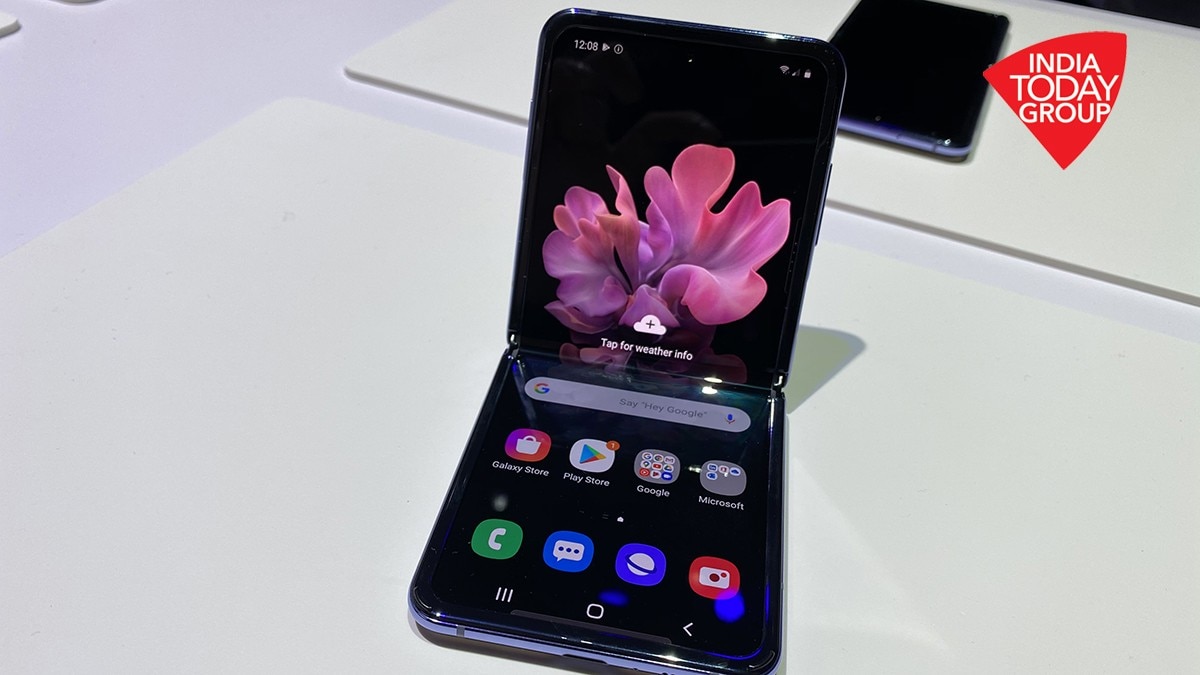 The Galaxy Z Flip is the second-gen product. And it feels like one. The biggest change is in the design and form factor. The changes are for the better. The big deal with the Galaxy Z Flip is that its screen is now using a flexible glass layer. In fact, it is the first smartphone with a flexible glass layer. You pick the phone, unfold it and scroll through the apps and you realise what a huge difference this makes. While scrolling on the Fold last year felt jarring, the screen of the Galaxy Z Flip is like any good screen you get in a premium smartphone, complete with its glass feel. The slightly raised frame around the display still an eyesore but I feel this much compromise is acceptable at the moment. We are still in the early stages of foldable smartphones.

Then there are other design bits. Unlike the thick and bulky Galaxy Fold, the Galaxy Z Flip is rather sleek and light. This is also because the phone comes with a smaller 6.7-inch screen. The difference between the Fold and Flip is similar to the difference between a cigar holder (Fold) and cigarette box (Flip). You slip the Flip into the pocket and it won't bother you. In fact, it won't feel any different compared to a regular smartphone.

The third big difference is the hinge in the phone. Samsung says it is more durable compared to what it used in the Fold last year, it surely is smooth when you fold or unfold the phone. No, when folded the two halves of the phone still don't touch each other at the hinge, and there is still a crease in the screen but one that you can't see but only perceive with touch but once the phone is unfolded its screen looks completely seamlessly and just like any other regular smartphone.

The design of the Galaxy Z Flip is so good that I believe Samsung has managed to solve the design challenges involved in creating a foldable phone. That is great for the future. The only concern, and this is something only time can answer, is the durability of the hinge. In the little time that I spent with the device, I didn't notice or suspect any durability issues.

The only reservation I have with the design of the Z Flip is the material Samsung has used to create the phone. This is a phone too shiny, shinier than even the Galaxy S20 devices, and it reflects smudges within a minute or two of use. The shiny surface also feels a little cheap. But this is something subjective. I like the phones with matte finish but users who crave bling will be perfectly okay with the Z Flip, particularly with its gold and purple variants.

The Z Flip has two screens, but one of them is a tiny 1.1-inch display that you get in top right corner of the phone when it has been folded. This can be used to see the time, notifications, as well as a tiny viewfinder if you are trying to use the rear cameras for selfie. Talking of rear cameras, there are two here. One, the main camera that uses a 12-megapixel camera. And another a 12-megapixel camera paired with an ultra-wide lens. This tiny second screen is actually neat, even if it may not sound much on paper.

When unfolded, the Galaxy Z Flip is a regular Galaxy phone. It runs the same Android with One UI software that other Galaxy phones do. It's quite fast with 8GB RAM and a 7nm chipset. There is 256GB storage. So basically plenty. There is 3200 mAh battery. 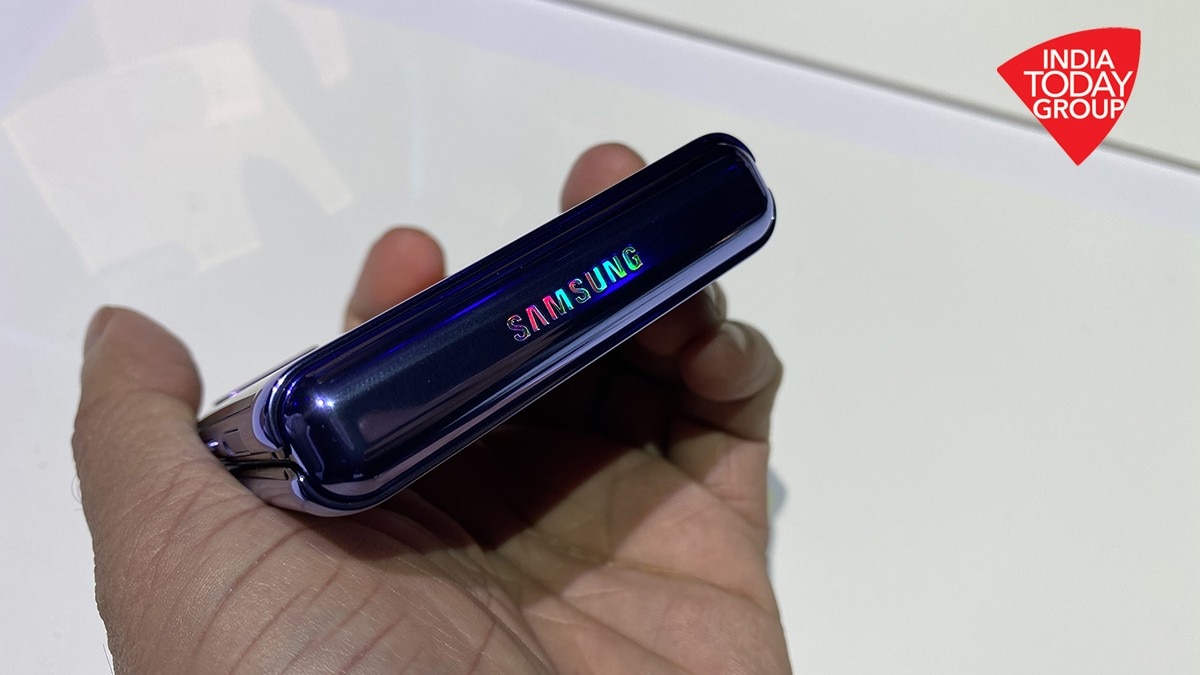 To give users more use cases with help of the foldable display, Samsung has created some new features in some of its apps, as well as in some Google apps like YouTube and Duo. When you are using the phone, you can fold it at the right angle, or for that matter at a different angle, the way you do with laptop and the apps readjust content automatically. For example, when you are watching a video on YouTube on the Z Flip and the video is running in full-screen mode, as soon as you fold the phone at a right angle, the video will resize to fit half of the screen the upper portion of the phone while the part of the screen will show comments and video description.

This too is quite neat, although due to the smaller size of the Z Fold screen 6.7-inch when the phone is used in this dual-screen mode, it's not particularly a great experience if you are watching video. But that is not the point. The point is that due to the flexible and foldable screen, users have access to different use cases, in case if they desire it.

Overall, I think the Galaxy Z Flip is a phone that you can use on a daily basis. It doesn't feel like a device that is a tech demo. It doesn't feel plasticky like the way Fold did, despite all the cool technology in that phone. And best of all, it doesn't look like that the Z Flip will cost as much as the Fold does. With the Galaxy Z Flip, Samsung is bringing the foldable phone experience to a wider set of audience, and while there are still compromises in it compared to say something like the Galaxy S20, these are the compromises a lot of consumer will not mind making in return of a novel form factory and a slice of smartphone future.