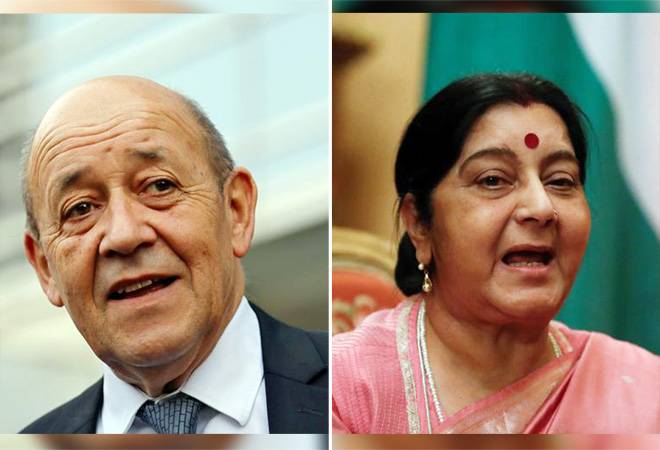 India and France on Saturday held discussions on deepening the bilateral strategic partnership through cooperation in the Indo-Pacific region, defence, space and civil nuclear energy sectors.

"We adopted an action plan to guide our work for the coming months so as to advance as efficiently as possible towards the final decision for building this power plant," he said.

"Six EPRs account for a total capacity of almost 10 GW, which is a significant contribution to India's aim of producing 40 per cent of its electricity from non-fossil fuels by 2030, in keeping with its commitments made ahead of the Paris Climate Conference," he added.

In March, India and France inked an agreement to expedite the Jaitapur nuclear power plant project, with the aim of commencing work at the site by year-end.

The Indo-French nuclear agreement was signed in 2008 to build a nuclear power plant in Jaitapur, some 600 km south of Mumbai. The power plant will have six reactors with a capacity of 1,650 MW each

Once installed, the Jaitapur project will be the largest nuclear power plant in the world, with a total capacity of 9,600 MW.

The project will also contribute to Make in India as it involves transfers of production, technology, joint research and training, Le Drian added.

Swaraj said the joint vision forms the basis of cooperation in the space sector.

She thanked France for supporting the launch of Arianespace rocket from French Guiana, a territory located along the northeastern coast of South America.

Noting that the foundation of India and France relations is based on "mutual trust", Swaraj said the two countries are looking to strengthen their ties in various sectors.

"We had very fruitful talks. We closely looked at all the aspects of our mutual ties. We are taking our cooperation forward in the Indo-Pacific region, which will not only benefit these two countries but also other countries in the region," she told reporters.

"Our defence relations are historic and we have been involved in a number of exchanges in the form of training and joint exercises," she said.

The external affairs minister also reiterated the resolve of the two countries to jointly fight terrorism.

"Last year, our bilateral trade was worth 9.62 billion euro, if we both have to reach the trade of 15 million euro by 2022 we both will have to work towards further strengthening our trade relations," she said.

There will also be an exchange of 10,000 students between the two countries by 2020, Swaraj said.

Le Drian said the discussion between the two leaders was "characterised as always by a great convergence of views and shared ambition".

"It is not by chance that France and India are celebrating the 20th anniversary of their strategic partnership this year. It is because we attach the same importance to multilateralism, respect for the rule of law, the same ambition to usher in a just and sustainable world," he said.

"It is also because India knows that in France it has a partner that has never failed it and on which it can count in the future. This holds true on the strategic front, notably with the strengthening of our exchanges on the Indian Ocean, which today are fast developing and our shared commitment to fighting terrorism, as we mark 10 years since the deadly Mumbai attacks," Le Drian said.

"This holds true on the economic front: our companies are investing and innovating in India under the Make in India programme. On the fronts of urban development and the digital economy, our companies are present and working to build the India and France of tomorrow," he added.

His visit comes amid a massive controversy over the procurement of 36 Rafale jets from French aerospace company Dassault Aviation under a Rs 58,000 crore deal.

A senior MEA official said discussion over the Rafale deal did not figure in the talks between the two leaders.