PMC Bank crisis: How much should a depositor get if bank goes bust?

Banks deploy the money collected from numerous depositors who trust the bank with their life savings. These depositors are concerned whether their hard-earned money is safe or not Punjab and Maharashtra Cooperative Bank (PMC Bank) is facing an unprecedented crisis where 73 per cent of its total loan book is exposed to cash-strapped realty firm Housing Development and Infrastructure. While depositors in the PMC Bank are hoping to get their deposits back, there is another bank - Lakshmi Vilas Bank - that has fallen into trouble. The Reserve Bank of India (RBI) has put the bank under prompt corrective action while it reviews and manages irregularities in its books. There are many other banks dealing with asset quality deterioration, making depositors nervous.

Banks deploy the money collected from numerous depositors who trust the bank with their life savings. These depositors are concerned whether their hard-earned money is safe or not. It is imperative that interests of depositors should be given higher priority than other stakeholders.

In order to ensure the interests of depositors at the bottom of pyramid, the government had introduced deposit insurance scheme for all banks operating in India under the purview of RBI. This scheme is managed by Deposit Insurance and Credit Guarantee Corporation (DICGC), promoted by RBI. Under the deposit insurance scheme if a bank faces cancellation of banking license or liquidation, bank depositors get their deposits back upto the prevailing insurance cover. So, the level of safety for bank depositors depends upon the extent of their deposits that is covered under the scheme.

What should be fair deposit insurance?

With time inflation takes a toll on prices that go up in tandem. As money loses its value, people witness their expenses as well income going up with time. Therefore, it is ideal for financial safety net, that is, deposit insurance to take inflation duly into account.

As per the government data taken from the Cost Inflation Index, the prices have gone up by 4.89 times. In order to be fair with bank depositors, the insurance cover should have gone up to at least Rs 4.89 lakh or to a more rounded figure of Rs 5 lakh. 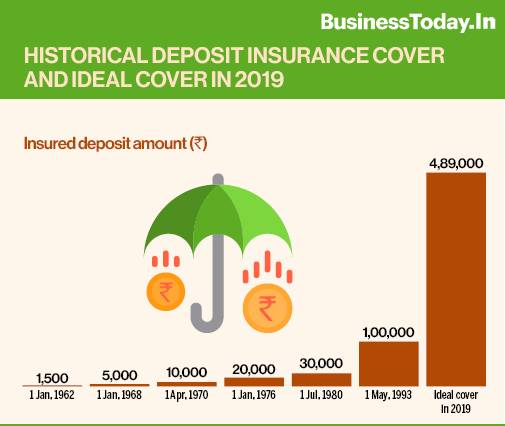 Unless the quantum of protection under the DICGC is sufficient, the number of people vulnerable to such banking stress will be higher. An adequate insurance cover will not only insure the higher number of depositors but also prevent panic reaction. That said, it is high time that DICGC reviews the cover amount and increases it to the current fair value of Rs 5 lakh.

Also Read: Carmakers see green shoots of recovery even as auto sales fall by 20.5% in September