Bengaluru vs Noida: Fierce debate on the better IT city divides netizens

Bengaluru rains: Social media users say that cities like Noida are booming and whether Bengaluru deserves its India’s silicon valley title or not.

Bengaluru has taken centre stage as parts of the IT hub continue to remain submerged following torrential rains in the city. This has prompted users to say that cities like Noida are booming and whether Bengaluru deserves its India’s Silicon Valley title or not.

Head of Government Relations at Appinventiv Ayush Gupta shared a screenshot of Noida. Gupta wrote, “I won’t be surprised if most of the IT companies based in Bangalore soon move their base to Noida.” He said that Bengaluru is flooded, companies are facing major losses due to the failing infrastructure system, and traffic is a huge concern. "Basically, Bengaluru just has nice weather," he said.

He said, Noida, on the other hand is booming and is a perfectly managed city whether it is during traffic hours, rain or infrastructure. Gupta credited the Yogi government for transforming the city in the last five years. Another debate was sparked after a user said that Gurugram is better than Bengaluru for startups, as the airport is literally 20 minutes away, cabs are more easily available, and metro connectivity is much better compared to Bengaluru. “You can add to the list in the comments or tell me why Bangalore is better. Either way, I’m not moving.”

A user also wondered whether Bengaluru versus other cities is the new debate in the market now whereas another person wondered whether boating services are live in Bengaluru or not. CoinSwitch Kuber’s Ankit Vengurlekar talked about ensuring employees’ wellbeing over anything else in situations like these.

He wrote, “While Bangalore was flooded and millions were adversely affected, some fold sat on footover bridges and ensured continuity of work. WHY are we so obsessed with working?” He further questioned managers and companies on the steps they are taking to ensure the well-being of their employees in such dire straits. 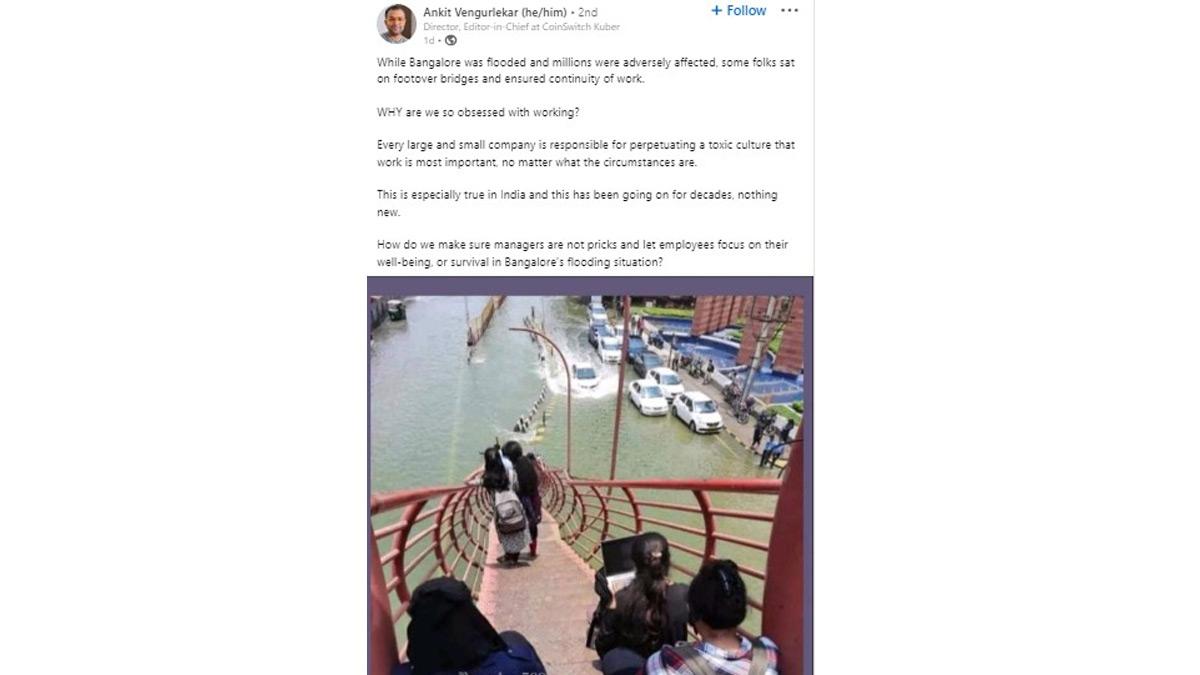 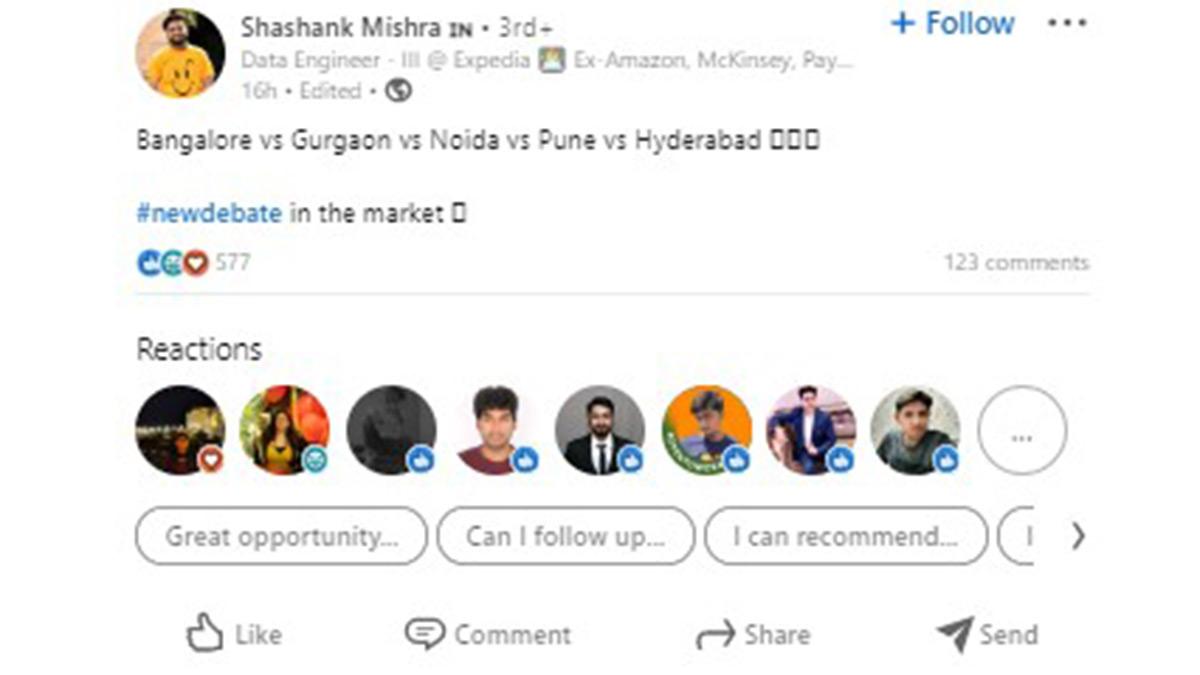 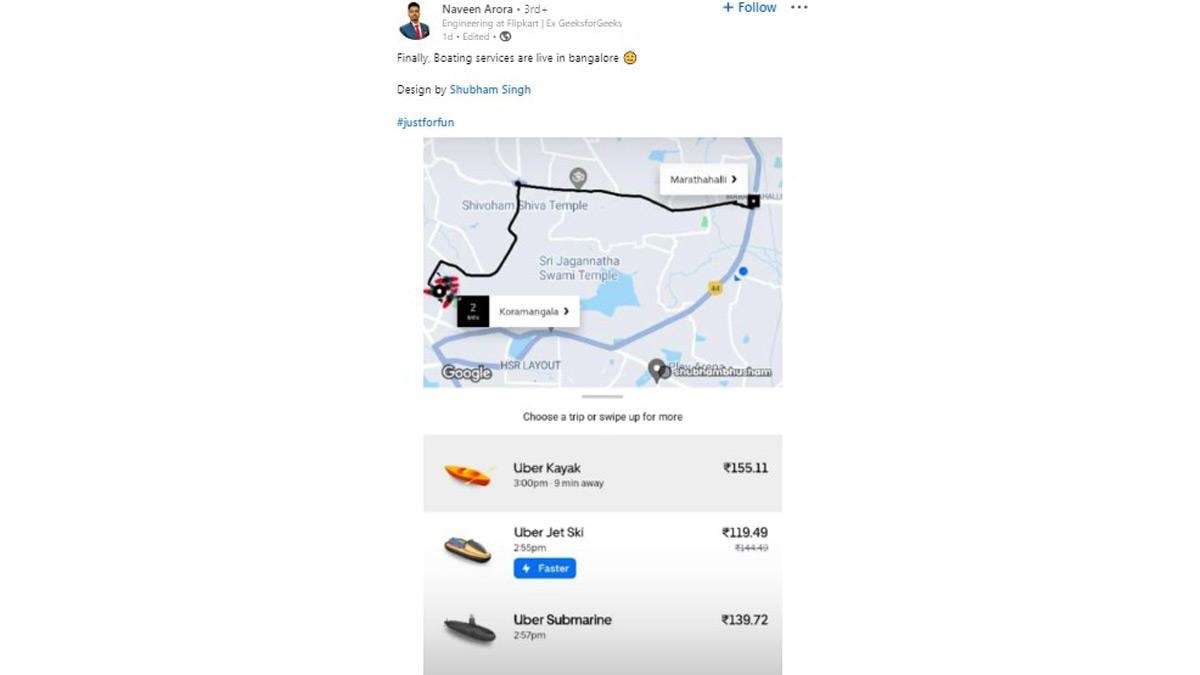 Meanwhile, floods in Bengaluru have led to a loss of Rs 225 crore on a single day to both IT and banking companies. The Outer Ring Road Companies Association (ORRCA) wrote to Karnataka CM Basavaraj Bommai and said IT and banking sectors along the Outer Ring Road corridor employ over half a million professionals and generate revenue worth $22 million annually.

The letter stated, “Poor infrastructure on this corridor however is bringing down the efficiency and productivity of the companies and putting employee safety and well-being at risk. Flooding on ORR on August 20 has led to a loss of Rs 225 crore as staff were stuck on the road for more than 5 hours.”

In a bid to keep the states’ economy and their operations going, employees of Wipro, Amazon, Goldman Sachs, Flipkart and Swiggy were forced to work from home. Those who were not so lucky had to opt for unusual modes of transportation like tractor rides to reach office.

Also read: 'Gurgaon is better for startups than Bengaluru': Entrepreneur’s post has everyone divided