News
LATEST
Trends
'Gurgaon is better for startups than Bengaluru': Entrepreneur’s post has everyone divided

'Gurgaon is better for startups than Bengaluru': Entrepreneur’s post has everyone divided

Bengaluru rains: Kunwar Raj responded to multiple comments and said that the post was not only because of the Bengaluru rains, but was an explanation on why he chose Gurugram over Bengaluru for his startup.

Bengaluru rains: Entrepreneur explains why Gurugram is better for startups

It was only a matter of time till this debate divided netizens. Now with Bengaluru rains, it seems like an opportune time for citizens of other cities pitching for their choice. But despite being submerged in water, Bengaluru remains much-loved with many netizens batting for it. Something similar happened on a post put up by Unfinance founder Kunwar Raj. When he said Gurugram is much better than Bengaluru for startups, all hell broke loose.

“No offence to the people in Bangalore but I’ve been saying since a loooong time Gurgaon is much better for startups or living in general,” said Raj in a LinkedIn post, along with a list of reasons for his argument. He said that the airport is 20 minutes away, cabs can be booked much easily, there is a balance of opinion and not everyone talks about startups, traffic is manageable within Gurugram, good metro connectivity, better housing societies.

His comments come amid severe water-logging in many parts of Bengaluru, often touted as the Silicon Valley or IT capital of the country. Infosys, Wipro, Flipkart, Amazon, Byju’s, Swiggy, Google, and more have offices in the city. Some of the poshest localities with multi-crore bungalows and luxury cars, were seen submerged in water after the city’s torrential rains. 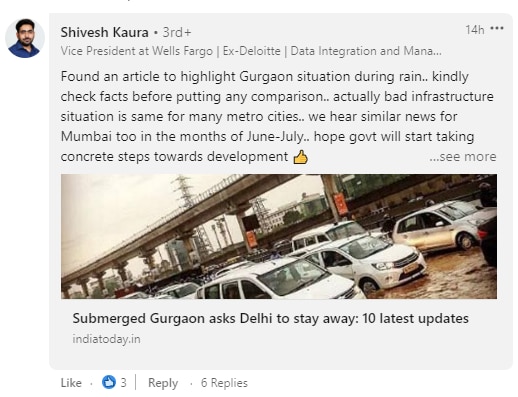 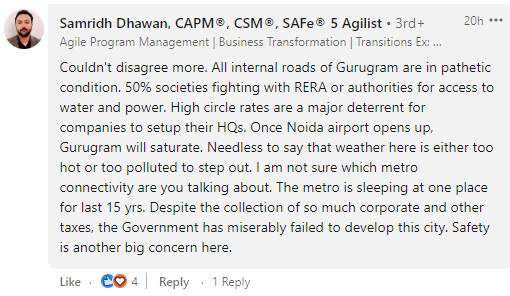 Some users agreed with Raj too.

Another LinkedIn user shared a link of a report on water-logging in Gurugram, and said that similar views can be found on Mumbai too during the monsoon season.

Raj responded to multiple comments and said that the post was not only because of the Bengaluru rains, but was an explanation on why he chose Gurugram over Bengaluru for his startup. "Hey guys don't take offence please, it is just my opinion on why I chose Gurgaon over Bangalore for my startup and living. I shared the reasons and asked you to share yours. The good part is you can choose to live wherever you want. Request you to not fight. I am extremely sorry," he wrote.