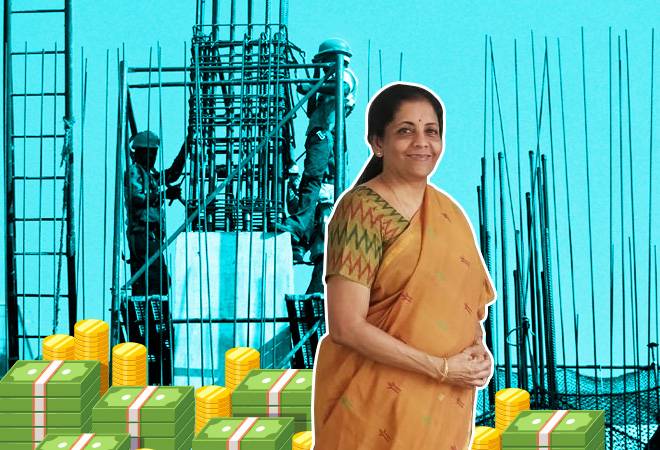 As Prime Minister Narendra Modi announced in his last Independence Day speech, the government plans to invest Rs 100 lakh crore in the infrastructure sector in the next five years. The finance minister Nirmala Sitharaman said she had launched the National Infrastructure Pipeline (NIP) on December 31, 2019 of Rs 103 lakh crore. It consists of 6,500 projects across sectors -- including housing, drinking water, clean and affordable energy, healthcare, educational institutions, railway stations, airports, bus terminals, metro and railway transportation, logistics and warehousing and irrigation.

Sitharaman said that NIP envisions improving ease of living. "A huge employment opportunity exists for India's youth in construction, operation and maintenance of infrastructure," she added.

Despite the big announcement, the share prices of infrastructure companies failed attract the buyers. Larsen & Toubro (L&T) shares fell 6.15 per cent on BSE to Rs 1284.95. The share price of Nagarjuna Construction Company (NCC) fell 6.76 per cent to Rs 51. Rail Vikas Nigam Ltd fell 9.31 per cent to Rs 24.85, when the Sensex tanked 988 points immediately after the budget.

"The past governments used to announce all these projects separately in the budget. Now we realise that these are not new projects. It will be an aggregation of the pending projects under one cost head. The Rs 100 crore investment theme is just a process, not projects," said an executive with an major infrastructure company.

The government plans to build 2,500 km access control highways, 9,000 km of economic corridors, 2,000 km of coastal and land port roads and 2,000 km of strategic highways. The industry experts say that it is not a big deal considering the past numbers. "When Vajpayee was Prime Minister, there were a large number of such projects created across the country," said a Mumbai-based expert.