The growth was led by the top three players in the industry. Market leader Maruti Suzuki saw its sales grow by nearly 92 per cent at 146,200 units while Hyundai doubled its tally at 52,600 units

The domestic passenger vehicle industry ended fiscal 2021 with a strong rebound in March with the highest ever monthly sales tally of over 320,000 units. These are more than double of the tally in March last year when the base was low due to the shift from BS IV to BS VI emission norms. Sales last year were also impacted by the pandemic as the lockdown had kicked in from the 25th. 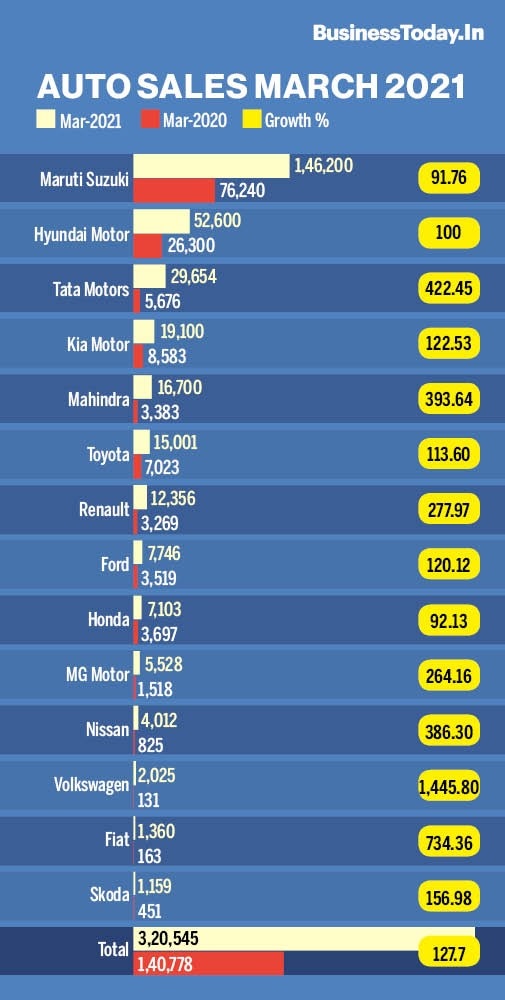 This is the third time ever that the wholesale tally crossed the 300,000 mark and the second month in a row. The growth was led by the top three players in the industry. Market leader Maruti Suzuki saw its sales grow by nearly 92 per cent at 146,200 units while Hyundai doubled its tally at 52,600 units. Third was Tata Motors with sales multiplying by over 5 times at 29,654 units. This was the highest monthly sales for the company in close to a decade. Its tally for the fiscal at 222,025 units was 69 per cent more than the pre-pandemic 2019-20. Capping a remarkable turnaround this was the best showing by the company in 8 years.

"The PV industry witnessed a strong growth in Q4FY21 on a low base with robust demand for personal mobility and new launches driving demand. Tata Motors PV Business posted its highest ever sales in 9-years, in March and Q4 FY21. In FY21 the business registered its highest ever annual sales in 8 years, while posting a growth of 69 per cent versus FY20," said Shailesh Chandra, President, Passenger Vehicles Business Unit, Tata Motors Ltd. "In the EV segment, the company sold 4,219 units in FY21, a threefold increase over FY20. The company also registered its highest ever monthly and quarterly sales of 705 EVs and 1,711 EVs in March 21 and Q4 FY21. Nexon EV, the highest sold EV in the country, crossed the milestone of 4,000 units, since its launch in January 2020."

Lower down in the order Kia Motor also more than doubled its sales at 19,100 units while Mahindra nearly quadrupled its tally at 16,700 units.

"At Mahindra we are witnessing very good momentum in demand and have a strong pipeline of bookings across our SUV range of  Bolero, Scorpio, XUV300, All-New Thar and also the Bolero Pik-up," said  Veejay Nakra, Chief Executive Officer, Automotive Division, M&M Ltd. "Infact Bolero volumes for March have been the highest in this financial year and despite supply constraints we have been able to ramp up production of Bolero Pik-up significantly during the month. We expect supply challenges to remain for the next two to three months and then ease out gradually," he added.

After facing strong headwinds in fiscal 2020 due to a sluggish overall economy, the industry endured a torrid first half of fiscal 2021 due to the pandemic. Post that however, the rebound as exemplified in March, has been better than expected. Companies say a shift in demand from shared to personal mobility, pent-up demand and new launches have helped sustain the momentum.

"We have been able to sustain the growth momentum as we closed the last quarter registering a 73 per cent growth in domestic sales, when compared to the sales in the corresponding period last year (Jan- Mar 2020). In fact, last month witnessed the highest ever domestic sales in the month of March since 2013, helping us clock 114 per cent growth over wholesales compared to March 2020. Our sales performance in the last quarter proved to be better than the sales in the festive season of the third quarter (Oct- Dec 2021), clocking a growth of 42 per cent," said Naveen Soni, Sr. Vice President at Toyota Kirloskar Motor Ltd. "The demand for personal mobility still continues to grow as we witness a surge in both enquiries and customer orders thereby registering a 7 per cent growth in domestic sales in March 2021 when compared to the sales in February 2021," added Soni.

"Fiscal Year 20-21 was an unprecedented year full of COVID led challenges, but the industry showed great resilience and made considerable recovery during the unlock phase," added Rajesh Goel, Sr. Vice President and Director, Marketing & Sales, Honda Cars India Ltd. "Similarly, after an extremely tough first half, strong efforts both at the production side and dealer network helped Honda to witness positive growth of 39 per cent in second half of the fiscal," said Goel.