Images of the new Maruti Suzuki Facelift 2018 have been spotted without camouflage. Reportedly, the new car, which is due to launch in August this year, was spotted at Maruti Suzuki's stockyard in Haryana.

Images of the new Maruti Suzuki Ciaz 2018 have been spotted without camouflage. Reportedly, the new car, which is due to launch in August this year, was spotted at Maruti Suzuki's stockyard in Haryana. Although the pictures are not clear, it gives us an idea of the changes we can expect in the updated version.

The car gets most changes in its front along with some revised interiors. The images show that the design and the styling elements are still the same and the interior is by and large the same. Some of the specifications that can be expected from the new Ciaz are - a stooped bonnet, a new and smaller front grille, and sleeker headlamps that seem fused with the grille. The car also will come with a bumper, which is nicely redone, chrome surrounds for the fog-lamp housings, and new LED-headlamps. 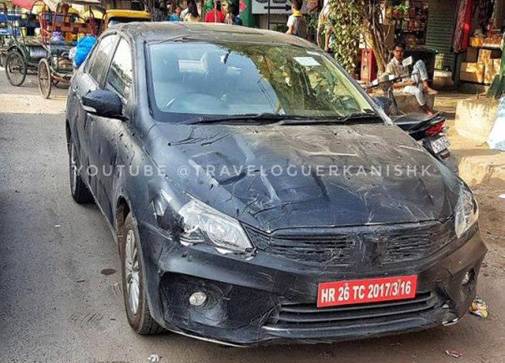 Ciaz will continue to feature the 16-alloy wheels, with slightly different looking multi-spoke rims. The top-end variant will have the chrome door handles as well. The rear end of the car has few changes, including the revised and restyled LED tail lamps, which seem to run horizontally. This new design will give the rear-end of the car a wider stance. The pictures reveal a few changes to the interior as well - touchscreen infotainment, in-car controls, and well-laid-out dashboard with two large air-con vents at the centre. The car could also get some wooden shades for the dashboard and door panels, like on new Dzire. Other changes will only be known once the car is officially launched. The new Maruti Ciaz Facelift could come with the new 1.5-litre petrol engine in place of the current 1.4-litre motor. The 1.3-litre DDiS diesel engine SHVS (Smart Hybrid Vehicle from Suzuki) will still be available. The car is likely to feature a 5-speed manual gearbox for both petrol and diesel. A new automatic unit (possible AMT) could also be offered (only with the petrol model) to replace the 4-speed torque converter.

Maruti Ciaz is a highly sold car in the mid-size sedan segment but has been losing its steam since rivals like Hyundai Verna, Honda City and the latest Toyota Yaris have launched with latest features and design elements. The facelifted car should help Maruti Suzuki reclaim its position in the market. The car can be expected to be launched officially later this year.