Tata Motors finally stepped into the compact SUV segment with the launch of its Tata Nexon today. Prices for petrol variants of the subcompact SUV will begin from Rs 5.85 lakh (ex-showroom Delhi), whereas diesel variants will start from Rs 6.85 lakh (ex-showroom Delhi). The top-of-the-line model will cost Rs 9.45 lakh. This will be fourth vehicle by Tata Motors that has been based on its Impact Design philosophy.

Both the engines drive a 6-speed manual transmission and offer three drive modes - eco, city, and sport. Tata Motors is reportedly working on an automatic transmission to go with the new Tata Nexon. 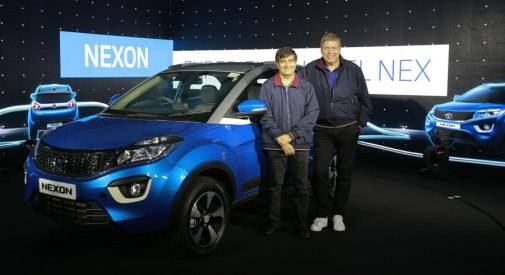 Inside the car, the Tata Nexon comes fitted with a 6.5 inch touch screen infotainment panel by Harman which runs Android Auto, but only in the XZ+ variant. Steering-mounted volume and phone controls, text and WhatsApp messages readout and reply, call reject with SMS are also some of the features that will be available with the new sub-four metre Tata Nexon.

For security, driver and co-passenger airbags, as well as ABS with EBD, come as standard issue in all Tata Nexon variants. Parking assist, seat belts with pre-tensioners and load-limiters, fog lamps with cornering assistance have also been included in the car as safety features. Push button start is a feature in Tata Nexon which can be enabled through a wearable wrist band.

Tata Motors are known for their full-size SUVs, like the Safari and Sumo line up, but this is the first time they have ventured into the compact SUV segment. The Tata Nexon will have direct competition with the likes of Maruti Suzuki Vitara Brezza, Ford EcoSport and Renault Duster. All of these vehicles are known favourites in the compact SUV segment. Tata Nexon might have a competitive edge on account of its price tag, though.