According to industry experts, the rising price of crude post the attack will deplete the country's foreign currency reserves and widen the fiscal deficit gap, while it fuels inflation in the domestic market 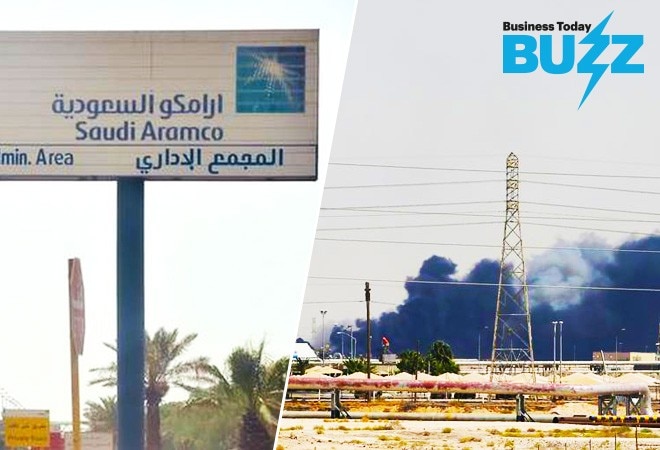 The drone strikes on the world's biggest oil producer Saudi Aramco, may have a larger indirect impact on Indian economy, where the slowdown creeps into the sales of passenger cars, real estate to even biscuits. According to industry experts, the rising price of crude post the attack will deplete the country's foreign currency reserves and widen the fiscal deficit gap, while it fuels inflation in the domestic market. Since the household savings in the country is under pressure because of job crisis, the demand is expected to fall further if consumers spend more on fuel, say experts. Besides, it can also fire up prices of essential commodities, they add.

At the macro level, high crude prices impact the external borrowings and debt position of the country. An expert in a credit rating agency said higher oil prices add to short-term fiscal pressures, which would force the government to cut taxes and offer higher minimum support prices for crops. Analysts expect the risk of widening fiscal deficit because of higher payments for crude. 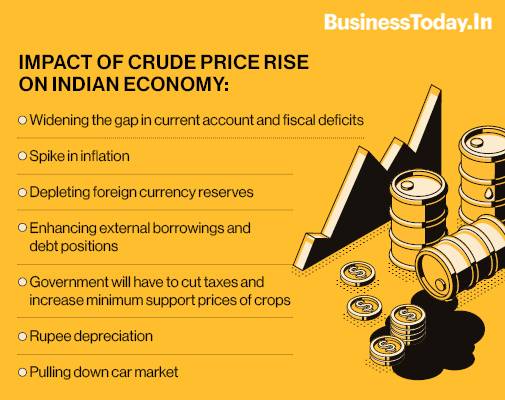 Oil prices surged to a four-month high after the attacks on the crude facilities of major producer in Saudi Arabia, sparking supply shortage fears. It jumped from $60 a barrel to $68 immediately on fears that the attack would halve Saudi's crude output. India imports 83 per cent of its required crude and a fifth of it is from Saudi Arabia. The country had imported 207.3 million tonne of crude oil in the last financial year.

Oil will become a worry for India, especially when it is facing many financial challenges at this point of time. India's economic growth fell to a six-year low of 5 per cent in the April-June quarter. The tax collections have sunk amid a sharp slowdown. US Sanctions against Iran was another big blow for India a few months ago. After the import from Iran reduced, the American and Venezuelan oil exports to India have surged. Indian refineries have been affected by the US sanctions, as they buy Iranian crude at $3-5 a barrel discount to the other crude grades in West Asia.

Aramco has been keenly pursuing opportunities in India. It has partnered with Indian public sector companies to jointly build a refinery and petrochemicals complex in Maharashtra. It is also negotiating to pick up 20 per cent stake in Reliance Industries's petrochemicals and refining business for $15 billion.

Indian rupee crumbled to as much as 71.67 a dollar on Monday as compared to its previous close of 70.92 against the US dollar after drone attacks on Aramco. According to estimates, every dollar increase in the price of crude increases the import bill by Rs 10,700 crore on an annualized basis. India spent $111.9 billion on oil imports in 2018-19. Reserve Bank of India (RBI) had been buying dollars for the seven consecutive months; even then the rupee had been under pressure. According to reports, RBI took   break in July from its dollar-buying spree and the latest data shows that it was a net seller of dollars for the first time since November 2018. The forex intervention data is released with a lag of two months.

The current account and fiscal deficits of the country are likely to take a hit if oil prices continue to rise. RBI Governor Shaktikanta Das said on Monday, "We should allow a few more days to see how the situation plays out before taking a final view...depending on how long the problem persists, it will have some impact on the current account deficit and further perhaps on the fiscal deficit if it lasts longer," he told a news channel.

India is on the verge of missing its fiscal deficit target for the present financial year, despite receiving a bonanza dividend from the central bank this year. According to reports, the government will be forced to raise the fiscal deficit target to 3.5 per cent of GDP from 3.3 per cent by end of this year, amid pressure for additional stimulus measures.

When fuel prices were low in the early years of the first term of prime minister Narendra Modi-led government, only a fraction of the benefits was passed to consumers. Excise duty on petrol and diesel was hiked, and the surplus income was used to bridge fiscal deficit. The reduced deficit lowered the government's borrowings, interest outgo and debt burden.

Das said on Monday, it was important to see whether alternative sources of supply come up and how soon the installations take to resume operation. The falling rupee, along with falling oil prices, should contain India's burgeoning current account deficit. India's CAD widened to $57.2 billion or 2.1 per cent of GDP in 2018-19 from 1.8 per cent a year ago.

If crude prices go up, the RBI may not be able to deliver more than 25 basis points of interest rate cuts, according to analysts. Inflation in food articles rose to 7.67 per cent during the month as against 6.15 per cent in July mainly on account of rise in prices of vegetables and protein-rich items. Vegetable inflation went up to 13.07 per cent from 10.67 per cent in the previous month. Wholesale price-based inflation was unchanged at 1.08 per cent in August, reinforcing the expectation of a rate cut by the RBI in the October policy review.

The increased geopolitical concerns overshadowed the measures the government announced recently to revive economic growth from a six-year low. The third set of stimulus in four weeks included a tax refund to exporters and a funding window for affordable housing to revive stalled projects.

The major worry of Indian economy is its subdued demand for passenger cars and real estate due to shrinking household savings. The data from India's top six carmakers shows that passenger vehicle sales plunged 34 per cent in August. These carmakers hold more than 90 per cent share of the market. The higher crude prices will affect the car sales further when manufacturers are spending heavily on marketing to make up for the fallen sales during the ongoing festive season.

The passenger vehicle sales, which were falling during the UPA-II government, bounced back and increased over 30 per cent during the first four years of the first term of the PM Modi-led government. But, during the last festive season a year back, when the crude prices jumped, the retail sales of passenger vehicles and two-wheelers contracted. The jump in fuel costs was among the major reasons along with tight liquidity, hardening interest rates and rising insurance costs.

However, the better than expected monsoon gives some hope. It may revive economic activities in the rural India, but with a time lag. The meteorological department said the monsoon rains were above average, however, it will not have an immediate impact on the foodgrain production as the sowing for the Kharif season is already over and wheat sowing is still a few months away. The excess rains will recharge the reservoirs that will be helpful in the next season.