When compared to several industrial sectors that are lobbying with the government for sops to fight economic slowdown, Indian sugar industry is going through a sweet phase. Is it the end of the industry's and sugarcane farmers' trouble? Unlikely In the last one month, the Central government has made at least three key policy interventions to help Indian sugar industry.

In the last one month, the Central government has made at least three key policy interventions to help Indian sugar industry and the sugarcane growers. The Union Cabinet approved higher price for ethanol, it permitted export of 60 lakh tonnes of surplus stocks of sugar and sanctioned the creation of a buffer stock of 40 lakh metric tonnes (LMT) of sugar for one year. The effect of these policy measures is expected to be immediate. It will improve the liquidity of sugar mills, reduce sugar inventory and facilitate timely clearance of cane price dues of farmers and reduce sugarcane price arrears of sugar mills. When compared to several industrial sectors that are lobbying with the government for sops to fight economic slowdown, Indian sugar industry is going through a sweet phase. Is it the end of the industry's and sugarcane farmers' trouble? Unlikely.

"With ethanol contributing nearly 10-15 per cent of the sugar mills' turnover for integrated sugar mills, remunerative ethanol prices are expected to encourage sugar mills to enhance the supply of ethanol for blending, thereby supporting their revenues, profitability and improving their ability to pay sugarcane farmers," says Sabyasachi Majumdar, Senior Vice President & Group Head - Corporate Sector Ratings, ICRA. The positive impact of the decision to allow export of surplus sugar is also too evident. "The value of exports, including subsidies, could be around Rs 15,000 crore based on the current prices and the increase in cash flows from subsidy could be to the tune of Rs 700-800 crore which will help reduce cane arrears," Khushbu Lakhotia, Associate Director India Ratings and Research Pvt Ltd (IND-RA) says. The third decision to create a buffer stock of 40 LMTs will serve multiple purposes. First of all, it will help sugar industry reduce its carry over stocks from the previous season. Secondly, it will help sugarmills clear their pending cane price payment dues to the farmers as the government will reimburse the carrying cost of this stock - about Rs 1,674 crore - as direct payments to the farmers on behalf of the sugar mills. Abhinash Verma, director general, Indian Sugar Mills Association (ISMA) says that the export of six million tones of sugar will solve the industry's inventory problem for the next 12 months. "Around Rs 11,000 crore sugar cane dues are pending. The main reason for not being able to pay the farmers is that most of our working capital has got stuck in the inventory. We are expecting to have 14.5 million tonnes of opening stock in October 2019, which means (at Rs 31 per kilo) almost Rs 45,000 crore of working capital is getting stuck. If some of this sugar gets liquidated by way of exports or extra domestic sale, then we receive funds," Verma explains. 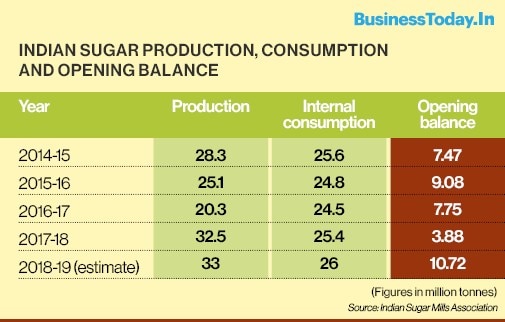 The solution works well, but only as a stop gap arrangement as it does not address the root cause of this problem. The primary issue is the problem of plenty. Unlike other crops, sugarcane prices are fixed by the government and every sugar mill is legally bound to procure whatever quantity of sugarcane is produced within the catchment area earmarked for them. The assured income, which is higher than most other crops, is an incentive to the farmer to cultivate more, thereby adding to the existing glut in sugar production. The second is that the higher the price of the raw material (sugarcane), the lower the price competitiveness of Indian sugar in the global market. The export of surplus sugar thus means an additional subsidy burden on the government. Even the export subsidy is not without risks. While the government states that under the World Trade Organisation (WTO) rules, the provision to announce subsidy on export of agri-products is open to India till 2023, other WTO members are not convinced. "Ind-Ra believes that any adverse WTO ruling that impacts the export subsidy could severely hurt India's exports, which is not viable without subsidy," Lakhotia says. "There are two plans. One is at the raw material stage, and another is at the final product stage," ISMA's Verma says. "First of all, I have to reduce my sugar production to avoid the surplus. For that, I can divert the surplus sugarcane into ethanol which is coming up in a big way," he adds.

The central government's Ethanol Blended Petrol Programme seems to be catching up. This year 6 per cent of the country's petrol production has come from domestic sugar mills. The government has been announcing an attractive price for ethanol too. It is also subsidising setting up of ethanol plants. "That subsidy on interest for five years by the government is attracting around 250 projects of ethanol production. I don't know how many of them will come on stream, but if all those come on stream our ethanol production capacity will get more than doubled. If that happens in the next 24 months, we will be in a position to divert almost 2.5 to 3 million tonnes of sugar by diverting the sugarcane juice into ethanol," Verma says.

The second suggestion made by the Rangarajan Committee, which looked into the issues of sugar sector a few years ago, is to rationalise the export subsidy. "If I compare my sugarcane price with the three largest sugar exporters in the world, Brazil, Thailand and Australia, we pay almost 60 to 70 per cent more than these countries. And sugarcane contributes about 70-75 per cent to my cost of production and that is why my cost is almost 60 per cent more than companies in other countries and I am non-competitive in the global markets," Verma says, adding that that industry is also trying to convince the government to rationalise the sugarcane pricing policy and adopt pricing systems that are there in other countries. Government think tank Niti Aayog is known to be working on a proposal to shift the price fixing model into a revenue sharing model between industry and the farmers. "Let the liability of the sugar industry be calculated as per the revenue sharing formula and in the years when the price is below the minimum guaranteed price or FRP, let that gap be funded by the government and for that you create a price stabilisaiton fund or a farmers fund." Verma says.

Considering the fact that one of the major sugarcane growing states, Maharashtra, is getting into election mode, one could argue that the timing of the decision was more political than economical, but whatever be the context, there is no doubt about its positive impact on the sugarcane farmers and the sugar industry, at least during the forthcoming Sugar Season (October 2019-September 2020).