Retaliatory tariffs and trade tensions have made the US and China unfavourable markets for each other, but has opened avenues for India to become a prominent exporter to both nations. 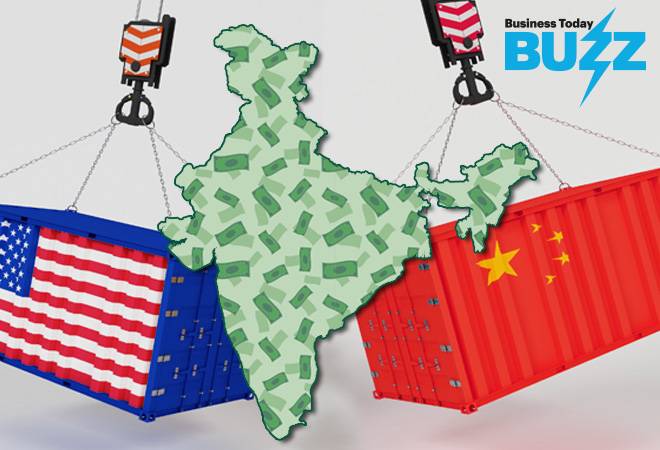 Trade war between the US and China could potentially be beneficial for India.

"In the next six months, we will decimate China in the US market," says Mahavir Pratap Sharma, Chairman of India's Carpet Export Promotion Council (CEPC). Sharma's optimism that Indian carpet exports can replace the Chinese carpets in the US market stems from perceived business opportunities that arise for India from the ongoing tariff war between the US and China. Both countries have announced higher tariffs and retaliatory tariffs for a long list of products exported from respective countries recently andChinese carpet is one such product that has thus become more expensive in the US market.

With 45 per cent of Indian carpet exports worth Rs 10,000 crore already going to the US, India has a bigger presence than China (which exports just about half that of India) in carpets in the US. Sharma says that the ongoing tariff war has made long-term purchase decisions difficult for US importers and hence will switch over to Indian carpet exporters in the coming months. "In carpets we always had an advantage. We are world's number one with about 35 percent global market share. China is half of us with 18 percent global market share. This trade war is not about duty increase (which is about 5-6 percent), but about the psychological advantage India gets. US importers are wary of depending on China now," Sharma explains.

Carpet is often tailor made to orders and takes about six months to deliver and hence very sensitive to price fluctuations. That is why the likes of Sharma (there are about 2500 carpet exporters in India) are confident about gaining market share in the US. "In the next two to three months we will begin to see the impact. About Rs 2000-odd crore of Chinese carpet business (in the US) should come in India's way. And in carpets, you don't change the factories very often, so the impact will be permanent," Sharma says.

It is not just carpet exporters who are looking at more business opportunities from the ongoing US-China tariff war. Indian tyre manufacturers have suddenly found their products become more cost-competitive after US increased tariffs on Chinese radial tyresused on buses and trucks. India's processed food exporters are trying to reach out to US retail chains like Walmart and CostCo, while Indian pharmaceutical companies - especially raw material suppliers - are seeking to fill in the space Chinese suppliers might vacate due to higher costs. A whole range of rubber items - hoses, pipes, rubber mats from India will now become more attractive for US importers. Apparels and textiles, leather products, machine tools, processed foods such as jams, marmalades and jellies, the products where Chinese imports have become more expensive due to higher tariff in the US are many.

Indian exporters' enthusiasm is not limited to the US. The retaliatory tariffs slapped by China against US are also resulting in export opportunities for Indian players in China. Carpet exporters, for instance have gone one step ahead. "The US is not exporting carpets to China, irrespective of that, we are seeing opportunity as their production is going down (because of tariff barriers imposed by the US), and cost is going up. We (CEPC) have just formed a wholly-owned subsidiary company in China to promote Indian carpets. We are opening a warehouse in Shanghai," Sharma says. On June 21, China organised a training session for Indian pharma companies on how to file product registrations. "Some 30 Indian companies were there, some 40 experts and industry representatives from China were also there. With their trade relations with US getting sour, Chinese are looking at Indian generic drug firms more closely," a commerce ministry official says. India is also talking to China to facilitate the exports of agri-produce including meat and meat products by streamlining favourable regulations.

The US-China trade war is definitely the trigger for these emerging opportunities, but Indian government agencies have also played a proactive role in quickly analysing the possible impact of the retaliatory tariffs slapped by the US and China against eachother to see where the potential lies for Indian exporters.

The US-China trade war intensified and US announced that since May 10, 2019, tariff rates imposed on goods worth $200 billion imported from China has been increased from 10 per cent to 25 per cent and China retaliated by slapping additional tariffs on $60billion worth of goods imported from US. Within weeks, India's commerce ministry came out with an analysis that looked at each of the product where tariff rise was announced by the US and China to identify potential products for enhancing Indian exports. The findings of its study were widely circulated among the stakeholders to sensitise them and act fast before competition fills up the emerging trade window in both the countries.

An analysis by the Commerce Ministry identified 503 tariff (product) lines where US imports from China and India's exports to the world are significant. Out of these, it shortlisted 203 tariff lines where India has the ability to replace Chinese exports to US as it has both market access and is an existing competitor of China in the US market. The value of US imports from China (of these 203 products) is $15.5 billion, while India exports $2.4 billion worth of the same set of goods to US at the moment. The key products in this list - which also means strongest opportunity to increase its market share - includes industrial valves, vulcanised rubber, carbon or graphite electrodes, sacks and bags of polymers of ethylene and natural honey. 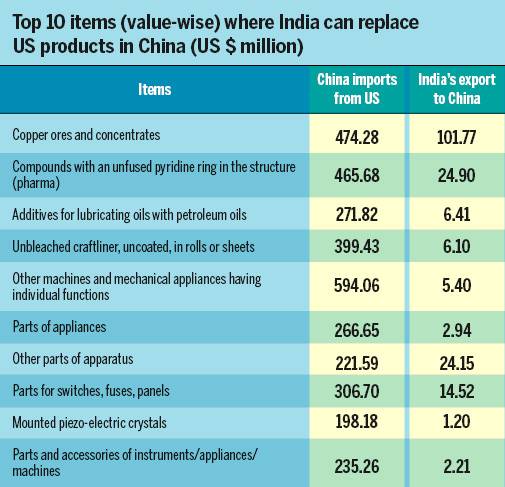 A similar exercise carried out in the case of China found that 151 tariff lines (product categories) are such that India can replace products originating from US to that country at the moment. India has both market access and is a competitor of the US in the Chinese market at the moment, it was found. These products include pharmaceuticals, medical equipment, engines, copper ores and concentrates, granite, various rubber products etc. On the whole, there were 774 product lines worth $20.4 billion where China'simports from US are substantial and Indian export capabilities are also substantial. 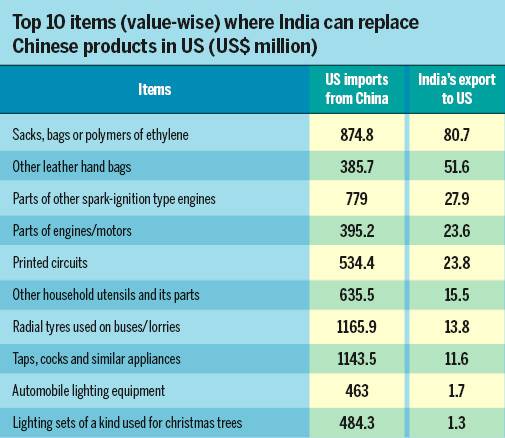 The dissemination of these product specific opportunities among stakeholders is going on.

According to a commerce ministry official, Indian embassies in China and US are both interacting with Indian exporters to facilitate this trade opportunity in these countries.

It might be too early, but the long to medium-term trade war between China and US may also see foreign firms operating in China looking at alternate production bases in the region. The fact that 43 per cent of China's exports are carried out by China-based non-Chinese firms should be a good enough reason to explore foreign direct investment opportunities from such firms to India and then allow them to champion India's exports.