When American author Norman Vincent Peale said, "every problem has in it the seeds of its own solution", he possibly had not thought of credit rating agencies and their role, sometimes, in financial upheaval. Be it the Asian financial crisis of 1997-98 or the subprime mortgage crisis of 2008, these agencies have been at the centre of controversies for giving highest rating to debt instruments by issuers, some of whom could not repay debt. And, there does not seem to be any permanent solution to the problems created or rather overlooked by them.

Closer home, rating agencies Fitch Ratings, ICRA, CARE and Brickwork Ratings have been named in a forensic audit by Grant Thornton that points to alleged collusion between officials of these agencies and those of IL&FS, which was taken to NCLT after having failed to repay debt obligations beginning September 2018. The crisis has jolted the Indian non-banking finance sector, hurting many companies in its wake.

For now, ICRA, the Indian arm of Moody's Investors Service, has sent its MD Naresh Takkar on leave, while an enquiry into anonymous allegations against him is pending. CARE took a similar stand last month against MD Rajesh Mokashi until the examination of an anonymous complaint received by the Securities and Exchange Board of India (SEBI) was completed. 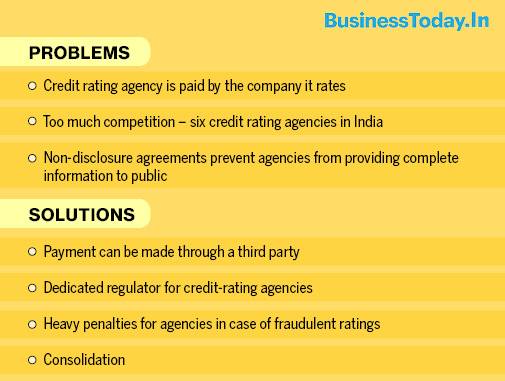 Credit rating agencies assess financial strength of companies and their ability to meet debt repayment obligations. The rating given to any debt shows the agency's level of confidence about the borrower's ability to honour the obligation. Ironically, their primary source of revenue is the fees paid by the company being rated by them.

"What ails the model globally is that the company getting rated pays the rater. This creates incentives for raters to overlook many issues around a debtor's ability to repay debt. It is a peculiar structure, where while you should be critical of the company you are rating, you do the opposite because of the very nature of the business," says Abheek Barua, chief economist at HDFC Bank.

Sujan Hajra, chief economist and executive director at Anand Rathi Shares and Stock Brokers, says the problem is that in most cases, a credit rating is solicited. "So, the agency is doing the job by taking money -the same problem that you find with statutory auditors. And sometimes, when a cosy relationship develops between the two parties, the process ceases to be objective," he says.

Moreover, the credit rating process involves a lot of non-public information. "So credit rating agencies cannot disclose all the information. This makes it extremely difficult for them to become totally transparent in terms of giving indicators."

Globally, the credit rating industry is controlled by three agencies, which command 95 per cent of the business. They are Moody's Investor Services (Indian ICRA's parent), Standard and Poor's (S&P, which owns majority of Indian agency Crisil), and Fitch Group, whose Indian subsidiary is Ind-Ra or India Ratings and Research.

However, in India, there are other rating agencies as well, including Brickwork, CARE and SME Rating Agency of India. "There are so many agencies competing with each other. This is one area where competition has led to a decline in transparency and quality of product delivered by creating incentive for raters to overlook many issues," says Barua. If agencies don't give in, they run the risk of losing business to rivals.

Hajra points out that in many cases, companies themselves provide fraudulent data to raters. "In such a scenario, some of the wrong doings can go undetected, resulting in inaccurate information going out," he says.

In the case of IL&FS, the four agencies had been involved in rating its various instruments between 2013 and 2018. Provident funds, mutual funds and insurance funds had invested over Rs 20,000 crore in IL&FS papers on the basis of credit ratings assigned to different instruments of the company and its subsidiaries.

Grant Thornton's report on forensic audit of these agencies has revealed nexus between interested parties. "...based on the review of the emails, it appears that the rating agencies were potentially aware of the issues in the IL&FS group. However, various strategies deployed by the then key officials of IL&FS group and certain favours and gifts provided to rating agency officials suggest the possible reasons for consistent good ratings provided to IL&FS group during the period June 2012 to June 2018," the report said.

The agencies have denied any collusion with IL&FS officials.

Barua says there is a need to ensure that the person getting rated does not pay the rater. "We need to overhaul the system and have a dedicated regulator for the rating agencies since there is now an emphasis on getting the corporate bond market moving," says Barua.

He believes that the regulator can be a specialist division of RBI or SEBI. Also, a third party can be involved for monitoring the rating and routing payments to the agencies. "We need far greater scrutiny and regulatory control over them as people invest their money on the basis of ratings given by agencies," he adds.

In the Budget 2019-20, the government has proposed deepening of the corporate bond market by working with regulators RBI and SEBI to enable stock exchanges to allow 'AA' rated bonds as collaterals. This will make it all the more imperative for credit rating agencies to furnish unbiased ratings.

"The overt focus has to be on ensuring that there is no cosy relationship between credit rating agencies and the company concerned," says Hajra.

While consolidation is the need of the hour, Barua believes in penalties for those involved in giving wrong ratings, especially since agencies continue to give 'AAA' or highest rating even a day before a company goes bankrupt. "Only some cosmetic changes won't do. Unless the rater has to cough up a significant sum of money that dents its profit and loss account, you might have another rating crisis again," he says.

This time around, though, the P&L accounts of credit rating agencies have truly been dented - not by penalties but by lack of business following the drying up of liquidity, especially in the wake of IL&FS crisis.

"Rating agencies have witnessed challenges in FY19 on the revenue growth front due to lower credit and risk appetite owing to tepid bond markets and the NBFC liquidity crises. We believe that rating agencies broadly will continue to face business pressures in the near-term. The industry outlook remains muted," Siji A Philip, analyst at Axis Securities said in a report.

"We expect near-term slowdown in topline to continue with pressure on margins," Philip said in regard to CARE Ratings.

In such a scenario, when margins are reducing and the credit rating model itself is being questioned, it is time for agencies to be reinvented and better regulated. In the UK, specialised regulatory agencies look after consumer protection and there is a lot of retail participation in the bond market through mutual funds.

"We should also work out our own model with regulatory checks and balances. We are trying to get into the bond market in a big way and unless there is financial credibility, deepening of the bond market will remain a dream," adds Barua.