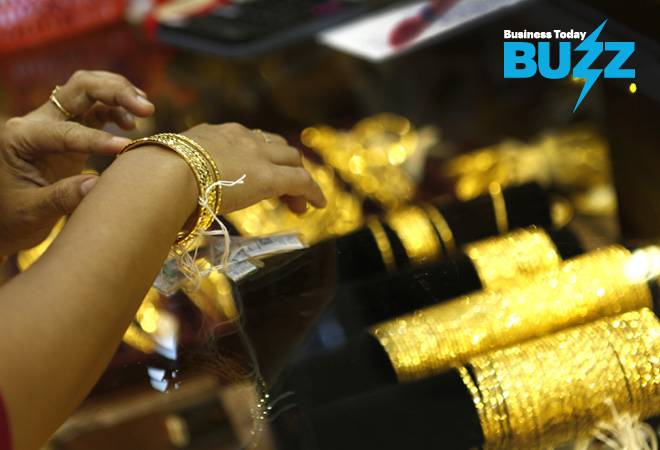 Gold prices in the country touched unprecedented levels earlier this week with 10 grams of 24 carat gold hitting Rs 38,095 in the Mumbai market on Wednesday. That's a sharp increase of nearly 25 per cent from the Rs 30,560 exactly a year ago.

At the beginning of year it was Rs 32,905 per 10 grams. Prices rose to Rs 35,000 by mid-February. After slipping to Rs 32,000 by early May, prices have only been rising since then. Globally, the fears of an economic slowdown, increased central bank purchases to keep gold as reserves, escalating trade war between the US and China, depreciating rupee against dollar are some reasons for high prices of the yellow metal turning out to be the safest investment option, say experts. Overall gold demand in India, in the first half of 2019 was 372.2 tonnes, 9 per cent higher than the first half of 2018, despite a slowing economic environment and restrictions on the movement of cash during the election season. Akshaya Tritiya purchases along with favourable prices were two major factors propelling the demand in H1CY19.

Somasundaram PR, Managing Director, India, World Gold Council says the growth in India was underpinned by robust trade promotions, a higher number of auspicious days and a positive consumer response to softer prices in April and May. "We expect 2019 full-year gold demand to be around 750-850 tonnes," he says.

The World Gold Council says the global gold demand was 1,123 tonnes in Q2, up 8 per cent year-on-year. The H1 global demand also jumped to a three-year high of 2,181.7 tonnes, largely due to record-breaking central bank purchases. Continued central bank buying and sustained growth in gold-backed exchange-traded funds were key drivers of this increase.

Central banks bought 224.4 tonnes of gold in Q2CY19, which took H1 buying to 374.1 tonnes - the largest net H1 increase in global gold reserves. Central banks are among the world's largest investors in gold, with total holdings of more than 30,000 tonnes. In 2018, central banks added 651.5 tonnes gold to their holdings, the biggest gold buying spree by the central banks in the last 47 years. 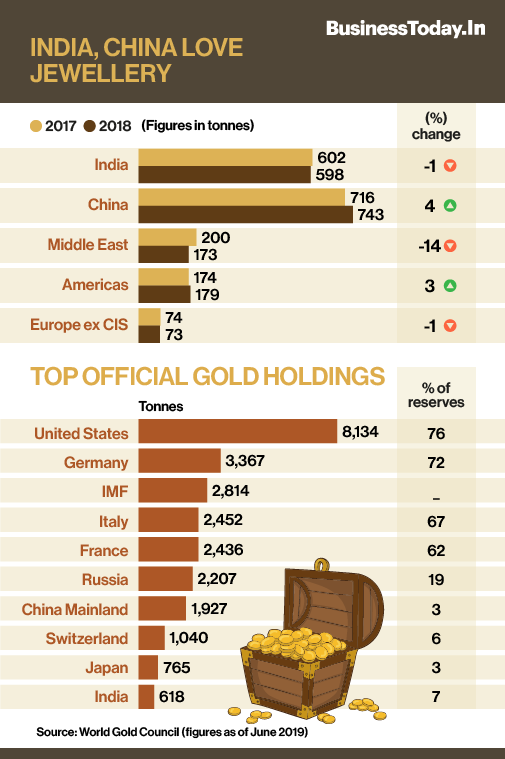 "China, the world's largest foreign exchange reserve holder and the world's second largest economy, recently joined the global central bank gold rush by increasing its gold reserves," says a recent Motilal Oswal report on gold demand. It says that some central banks in Asia including China, India and Kazakhstan and from Europe such as Russia, Poland and Hungary have begun accumulating gold, although in minimal quantity, and that is starting to reflect on prices.

While China boosted its gold reserves by adding approximately 50 tonnes alone in 2019 to increase its reserves to nearly 1,916 tonnes, Russia - one of the leading buyers of gold - purchased about 274 tonnes in 2018. If Russia and China accounted for 60 per cent of central bank purchases, other notable buyers include Turkey (40 tonnes), Kazakhstan (11.2 tonnes), Qatar (9.4 tonnes) and India (8.4 tonnes).

"With the central banks' love for gold on the rise, geopolitical uncertainty increasing and clouding of global recessionary environment, we believe that gold prices are likely to rally in the upcoming quarters," says brokerage Motilal Oswal in a report. On the domestic front, the RBI is likely to join its counterparts in Russia and China in scooping up gold, adding to its record holdings and lending support to global bullion demand. The RBI increased its stash by about 42 tonnes last year. It added more this year with the country's gold reserves now standing at a record high of almost 618 tonnes, with a potential to buy more, says the report.

Smuggling on the rise

In Budget 2019, Finance Minister Nirmala Sitharaman proposed to increase custom duty on gold and other precious metals from 10 per cent to 12.5 per cent. The industry had been demanding the duty to come down by 2-4 per cent for the past few years to curb smuggling of the yellow metal. In July itself, the DRI had seized 6.58 kilogram of gold of foreign origin valued at Rs 2.33 crore in Kolkata, 5 kg of gold valued at Rs 1.75 crore at Courier Terminal Delhi and 6.46 kg of smuggled gold valued at Rs 2.17 crore at Hyderabad airport etc. It was estimated that about 100 tonnes of gold had been smuggled in India every year for the past few years. Following the hike in customs duty, smuggling has peaked, say experts. Organised jewellery chains say only unorganised sector consumes such gold. Sources say the imported gold is sold at 2-3 per cent less than the market price.