Contrary to what most market participants had anticipated, the Sensex returned just 51% under PM Narendra Modi's term as compared to UPA-II's 78 per cent and UPA-I's 180 per cent under the then PM Manmohan Singh 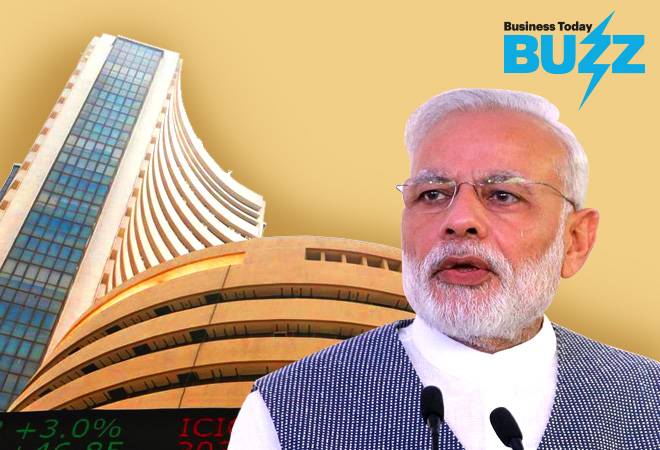 About 900 million voters are sealing the fate of the incumbent government in the world's largest democratic election.

After India's strong response to Pulwama terror attack, most opinion polls had predicted a majority win for prime minister Narendra Modi-led National Democratic Alliance (NDA) in the ongoing general elections, which took stock market indices to fresh highs. However, a few brokerages now have come out with reports - based on their own understanding of the ground situation - suggesting the NDA would need a few big post-poll alliances. This, along with the fact that global markets are cautious over US-China trade issues, has boosted the confidence of bears in the market. Volatility has risen, and this could just be the beginning.

Brokerage Ambit Capital in its recent report has suggested that the BJP is headed for a big loss in Uttar Pradesh. "With the Modi wave clearly ebbing and the SP-BSP alliance having more than 40-50 per cent vote share, the Bharatiya Janata Party (BJP) is set to secure only 30-35 seats (versus 71 in CY14). Given this, we highlight that in a base case we expect the BJP to win 190-210 seats whilst the NDA in its current form wins 220-240 seats at the national level. This, in turn, means the NDA will have to sign-up at least 4 large regional parties post-poll to form the government at the centre."

About 900 million voters are sealing the fate of the incumbent government in the world's largest democratic election. Meanwhile, the Sensex has fallen over 6 per cent (by Friday's closing) from an all-time high it hit on April 18. In fact, contrary to what most market participants had anticipated, the Sensex has returned just 51 per cent under PM Narendra Modi's term as compared to UPA-II's (United Progressive Alliance) 78 per cent and UPA-I's 180 per cent, under the then prime minister Manmohan Singh. (See graphic)

The price-to-equity (PE) multiple had jumped quite a bit by May 2014 on hopes of PM Modi winning the elections. The multiple continued to expand and hit 22-mark within the first year of Modi's tenure, suggesting the market had faith in the new leadership. The PE gyrated in 17-22 range over the next three years, only to see a steep fall led by an alarming rise in non-performing assets (NPAs) and hence losses reported by banks over the past couple of quarters. Hopes of earnings rebound never fructified. At present, the Nifty is trading at a 12-month forward P/E of 19.1 times, 8 per cent premium to its long-period average of 17.7 times. The Modi administration introduced many structural reforms in the last five years. Banks now have more teeth to drag defaulting companies to the National Company Law Tribunal (NCLT), the cash ban of November 2017 led to a surge in online payments and a shift in preference from fixed to financial assets. The introduction of the Real Estate Regulatory Authority (RERA) brought back some faith in real estate. Infrastructure also got a leg up. A prudence fiscal math made the Modi administration a hit among global investors. However, poor job growth and, of late, signs of slowdown in sectors such as auto, FMCG and aviation have put a dent on Modi's reform-oriented image.

Here is a five-year report card of the Modi government:

The emergence of the retail investor as a solid source of inflows to financial markets could be seen as one of the biggest achievements of Modi's tenure. From 6.2 million SIP accounts in March 2014 to 26.2 million by March 2019, the cash ban changed investor preference in a big way. Assets under management (AUM) of the mutual fund industry grew more than two-fold to Rs 23.79 lakh crore by March 2019 from Rs 10.10 lakh crore in May 2014. This lifted total market capitalisation of BSE-listed companies to Rs 146 lakh crore from Rs 85.20 lakh crore as on May 26, 2014. So bullish was the sentiment that mutual funds injected over Rs 24,000 crore of inflows in October 2018, their highest ever, even as the benchmark Nifty fell 5 per cent during the month - never seen before.

Another positive development under PM Modi's tenure has been stability in macro indicators. In 2013, India was counted among 'fragile five' nations as it grappled with twin deficits. The fiscal and current account deficit widened at a time when inflation was ruling in two-digit. Inflation quoted at 11.5 per cent in November 2013. Today, it is at 2.9 per cent. Current account deficit (CAD) was at 5.1 per cent of GDP in the December quarter of 2012 as compared to 2.33 per cent in the same quarter of 2018. Fiscal deficit, which was at 4.6 per cent of GDP in FY14, has been reduced to 3.4 per cent of GDP in FY 2018-19.

Thanks to falling crude oil prices, the Modi government had a tailwind for the economy for a considerable part of its tenure. But the government didn't go for a reciprocal cut in duties on fuel, even when Brent crude touched a record low of $30. A few analysts feel the government could have used the opportunity to spur growth. "The government took it easy when oil prices fell. It did not adopt right measures to instil growth during that period," says Sanjiv Bhasin, Executive VP, Markets & Corporate Affairs, IIFL Securities.

The reforms under the Modi government were mostly structural. Some of them have had a visible impact, some are still struggling. Among them is the Goods and Services Tax (GST). Launched in July 2017, it is yet to add desired revenues to the government's kitty. However, the move is said to have triggered a shift in demand from unorganised to organised sectors. This has given a lift to stocks of sectors such as FMCG, retail, food services, luggage, footwear, and apparel.

"Several stocks of these sectors have been re-rated in the past couple of years," says Amnish Aggarwal, Head Research - Prabhudas Lilladher. In the last five years, the BSE Consumer Durables has soared 189 per cent in Modi's tenure. The BSE FMCG index gained 61 per cent during the same period. By comparison, the Sensex has gained just 51 per cent.

"The IBC has seen some of the largest NPAs in steel, cement and infra sectors being settled," pointed out Aggarwal of Prabhudas Lilladher.  According to the rating agency Crisil, the recovery rate under IBC has been 43 per cent as of March 2019. It estimates the banking sector's gross NPA (aggregate) to drop to 10 per cent in March 2019 from 11.5 per cent at the end of FY18.

The average yearly divestment under Modi government stood at Rs 57,100 crore, quite higher than UPA-II's Rs 19,873 crore. FY18 became the first year ever when government offloaded stake worth over Rs 1 lakh crore. But, that was largely on the account of ONGC acquiring the government's entire 51.11 per cent stake in oil refiner HPCL for Rs 36,915 crore.

In FY19, disinvestment touched Rs 85,000 crore against the target of Rs 80,000 crore. It was largely done via several tranches of Exchange Traded Fund (ETF) of state-owned companies and cross-selling of government equity in same sector companies. For example, the government transferred its controlling stake in REC to PFC. The real privatisation drive, however, went missing. Air India is a big example.

Although intended good, RERA failed to revive the real estate sector and stocks. The BSE Realty index added only 14 per cent in the last five years. The market didn't appreciate the implementation of long-term capital gains tax either. The government could not bring in reforms in agriculture and labour markets as expected.

"The failure to amend the land acquisition act was not well received by investors and though some progress has been made in labour reforms, by and large, these are areas that need significant reforms," says Vivek Ranjan Misra, Head of Fundamental Research, Karvy Stock Broking.

"Agriculture needs structural reforms, though many reforms need to be carried out at the state level, the centre can nudge states in the desired direction. APMC (agricultural produce market committee) reforms, pricing mechanism and public investment are areas that need attention," he adds.

In 2014, only seven IPOs had hit Dalal Street. However, 2015 showed a big improvement with 21 IPOs raising Rs 13,513 crore as compared to little over Rs 1,200 crore in 2014. The public issues collected Rs 26,500 crore money in 2016 (26) and  Rs 75,278 crore in 2017 (38). IPO listings though fell drastically to 24, raising just Rs 31,731 crore in 2018 as bank frauds, concerns over corporate governance, liquidity issue arising post IL&FS default and a rout in mid and smallcap stocks hit investor sentiment. The IPO mart has somewhat revived in 2019, with six out of eight newly listed companies trading above their issue price so far this year.

As verdict day nears, Dalal Street investors expect the next government - whoever it might be - to continue with the reform process and make the businesses environment friendlier for more investment to keep flowing into Indian equities.

GICs may hire up to 1.5 lakh people in the next two years