BT Buzz: How the Russian Sputnik-V beat the world on coronavirus vaccine

The Western world and the big pharma are upset. They say Russia has not done adequate safety and efficacy studies and the claim is based on testing on less than 100 human volunteers 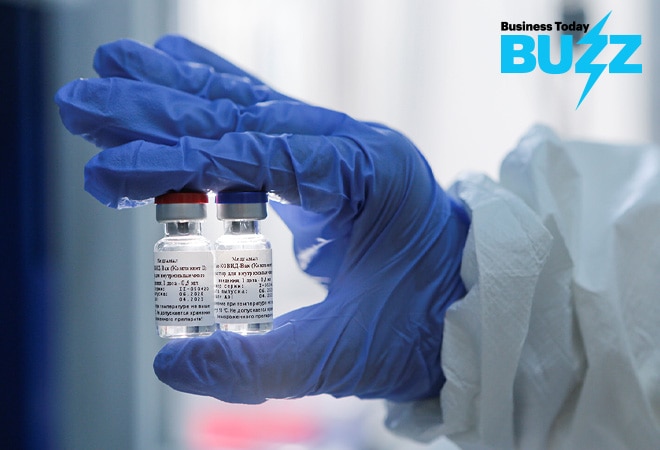 "Americans were surprised when they heard Sputnik's beeping. It's the same with this vaccine. Russia will have got there first," CNN reported in the last week of July, quoting a senior Russian official.

This week, Russia became the first country to officially register a vaccine for COVID-19, claiming that over 20 countries are already in the queue demanding over a billion doses of Sputnik-V, their coronavirus vaccine.

The Russian Direct Investment Fund, which partially funded the vaccine's development by the Gamaleya National Research Center for Epidemiology and Microbiology of the Russian Healthcare Ministry, estimates the global demand for vaccines will be minimum three to five billion doses by the end of 2021, a $75 billion opportunity. Although Russia has not priced its vaccine, it is eyeing at least $20 billion even if sold at $20 per shot. The target is to make 30-50 million doses this year itself at 5-10 million a month. Mass production by three local firms - Generium, R-Pharm and Binnopharm - will begin in September. 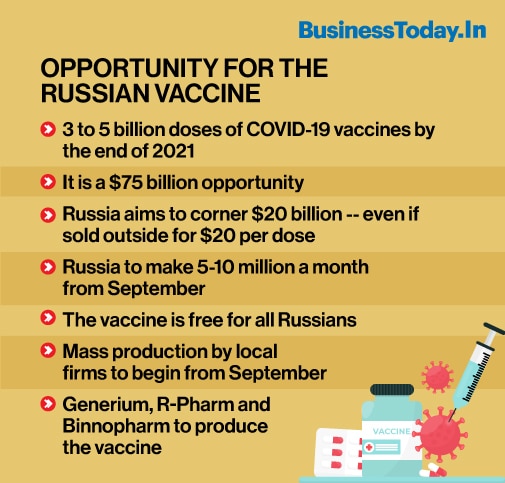 "There is great interest from Brazil, India, and many other countries looking forward to the Russian vaccine, the first vaccine in the world," the Russian news agency TASS reports. More vaccines are coming from Russia. "Four vaccines against the coronavirus have proven to be safe and tests on two more vaccines are at their final stage," the Russian Prime Minister Mikhail Mishustin recently told its Parliament, the State Duma.

The Western world and the big pharma are upset. They say Russia has not done adequate safety and efficacy studies and the claim is based on testing on less than 100 human volunteers. Some experts point out it is unfair to criticise without assessing the work Russians have done on vaccine development and Russia should reveal their findings.

The doubt also stems from their belief that Russia lacks the pharma-biotech infrastructure and scientific knowledge to come up with a key vaccine in such a short notice. The Russia and the CIS nations of the erstwhile 'Soviet Union' are not regarded as a global powerhouse in the field of pharma and biotech, though Russia has proven in the past its credentials in other areas of science and technology. Historically, the Russian pharmaceutical market was dominated by multinational companies, who once used to supply over 80 per cent of the drug requirements. Even now, global firms MSD, Pfizer and Roche are leading the hospital supplies, after domestic firm Biocad. Pharmasyntez is the only other domestic company among top 10 hospital suppliers. Among the pharmacy suppliers, the top three companies are again global companies like Bayer, Sanofi and Teva. At least until four-five years ago, Russia was importing 70 per cent of its vaccine requirements. Then, how could it make a vaccine for COVID-19, which the global pharma is still struggling to bring out? "The anxiety, surprise and anger of the big global pharmaceutical companies and the western media are understandable and are rooted on geo-political rivalries. But, it is true that Russia's pharma and biotech scene have changed a lot in the past decade. It has leveraged its healthcare capabilities built over centuries," says Chettikulangara Unnikrishnan, an Ayurvedic healthcare professional working in Moscow for the past two decades.

"There has never been vaccines with questionable safety on the Russian market. Not a single vaccine developer in the world has complete knowledge about coronavirus immunity sustainability after inoculation," Anna Popova, the Chief State Sanitary Doctor of the Russian Federation told a TV channel.

How the Russians did it?

When COVID-19 started ravaging Italy, Spain, Germany, France and the UK after Wuhan in China in March-April, Russia was then relatively unaffected by the virus. They closed borders for the rest of Europe, but by May, the virus started spreading fast. By June end, situation was brought under control. By June 30, 4,12,650 patients recovered from the disease and fatalities nationwide were only 9,320. The level of preparedness of Russia's healthcare system, early detection, the use of cutting-edge technologies and practical early treatment brought the mortality rates down, lauded Melita Vujnovic, World Health Organization(WHO) representative in Russia.

By May end, the vaccine research gained a global momentum. While China was going solo with three-four promising vaccines, the US big pharma advanced with tie-ups and Moderna's novel platform.  The UK's Oxford Research Institute made a breakthrough and tied up with the Swedish-British company Astra Zeneca. By then, the WHO listed over 150 projects with half a dozen projects advancing into final phase of trials. But no Russian vaccine project was in that list. The British Prime Minister Boris Johnson officially invited Russian President Vladimir Putin to take part in a virtual 'Global Vaccine Summit 2020' on June 4 devoted to research into a vaccine against the novel coronavirus. But, Putin chose not to participate. Russia had its own vaccine plans.

Putin had been in touch with his scientists and by mid-April, he asked his government to submit a report by April 30 on the plan of developing coronavirus vaccines. The instruction was to submit a scheduled plan for developing vaccines, carrying out the state registration of these vaccines using the accelerated procedure and launching them into industrial production. Until then, many Russian scientists, like Vladimir Chulanov, deputy director of the Health Ministry's National Medical Research Center of Phthisio-pulmonology and Infectious Diseases, were hopeful of coming out with a vaccine by year end, like their counterparts in other parts of the world. It will take about 18 months to develop a viable anti-coronavirus vaccine, they reckon.

Since President Putin's intervention, the plan was swiftly put in place and deadlines were set - middle of August as the target for registration and mass vaccination by fall. Infectious experts were fearing a second wave of the virus attack to come back by the winter. They calculate it will require 70 billion doses to vaccinate all Russians, in two doses. The Russians have about 18-20 per cent immunity as most of the population was immunised with influenza vaccines. To protect from the COVID-19 virus, the mass immunity needs to be improved up to 70-80 per cent with the new vaccines. "Naturally, Russia's population does have certain herd immunity," Mikhail Shchelkanov, head of the international research and education center of Russia's sanitary oversight authority told a Russian TV channel.

As many as 47 coronavirus vaccine projects in 14 platforms were activated across 17 research and development institutes by mid-May, Russian Deputy Prime Minister Tatyana Golikova told the Federation Council (the upper house of parliament). Compare this with India's own less than 20 projects. Only two among them are in human trials now. About 3.1 billion rubles ($43 million) were also allocated from the federal budget for the development of coronavirus testing systems and vaccines. The Russian scientists were using time-tested known platforms or vehicles to load antibodies into the cells. They had created Ebola vaccines and have fair knowledge on working on such platforms for over six years. By July, they zeroed in on 26 projects.

The Sputnik, testing and data theft

The Smorodintsev Research Institute of Influenza in St. Petersburg did early trials of one flu based vaccine in China and was starting Phase III in Russia. They were also planning Phase III by August, besides clinical trials of three other foreign vaccines. Another institute was trying a vaccine that can be used as a milk product, like a yogurt. But among all, the Gamalei National Research Center for Epidemiology and Microbiology research using the Ebola vaccine platform was most promising. The vaccine was found effective on small and large animals. In an unheard move in the usual drug development process, the vaccine was tested on the institute employees. Unofficial testing of the vaccine on volunteer employees of the Gamalei National Research Center showed success and caused no side effects, the Center's director Alexander Gintzburg revealed by May end. "There were no side effects, every employee who tested the vaccine on himself is healthy, happy and os performing their duties at workplace and at home in full, I hope," he told TASS.

On June 2, the Russian Defense Ministry reported that two groups of volunteers - military and civilians have been selected to test safety and effectiveness of the vaccine, a testing to be done for 1.5 months. The first group was of 50 servicemen, including five women, from various units throughout Russia. All of them were contract servicemen, warrant officers, and officers in the age group of 25 to 50 years. Among the 50 volunteers, there were 10 medical workers, including three doctors. Eighteen volunteers were vaccinated at Sechenov University in Moscow on June 18. The second group of 20 volunteers was vaccinated on June 23.  The vaccine was to be injected two times, with a 21-day interval. The Vektor State Research Center of Virology and Biotechnology also got permission to test its vaccine and 86 volunteers were recruited. Yelena Smolyarchuk, who heads the Sechenov University Center for Expert Evaluation of Medicinal Products, told officially that the group of volunteers, just like the first one, had adverse reactions, but were minimal and did not need require medical intervention.

Soon officials started saying tests are positive and Russia will launch a vaccine ahead of other countries. The plan is to give "conditional" state certification for the Gamaleya Center's vaccine by August and after the registration one more clinical study of the vaccine will be conducted on 1,600 people. The launch of industrial production is planned for September 2020.

Soon the world started to take notice. First, there were allegations that top politicians and business men in Russia got vaccinated at the Sechenov University. The UK National Cyber Security Centre claimed that Russian hackers had attempted to steal information on COVID-19 vaccine development from the UK, Canada and the USA. "First of all, we are very surprised by the timing of this, because basically, this happened the next day after we announced the approval of our vaccine in August," Kirill Dmitriev of RDIF told TV channels. Russia has no need to steal a British vaccine, as AstraZeneca has already handed over the technology to Russia's R-Farm to make and sell in about 50 countries, he said. Kremlin also said Moscow has nothing to do with the hacks.

Finally on Tuesday, President Putin announced development of the vaccine and said it will be free for all Russians.