BT Buzz: Why Vistara is better placed than IndiGo and SpiceJet to pursue long-haul dreams? 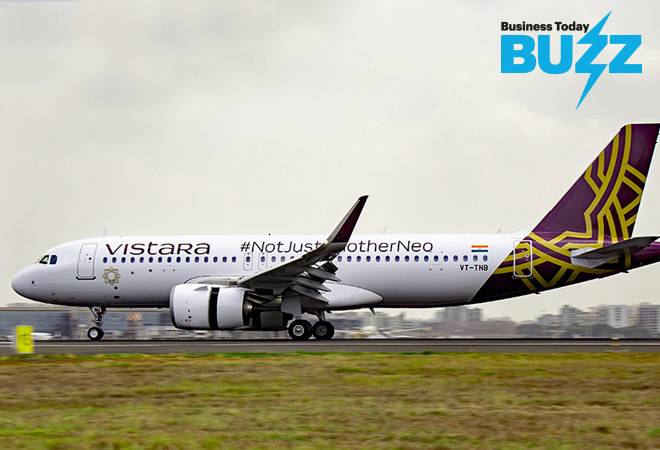 Even as the domestic aviation market continues to remain tepid, the Indian carriers have started to look at the international segment seriously. IndiGo signed its second codeshare agreement (after Turkish Airlines) in early November with Qatar Airways, followed by SpiceJet signing its first-ever codeshare with Emirates in late November. Then, early December, the full-service carrier (FSC) Vistara signed its sixth codeshare agreement with German carrier Lufthansa. Over the past few years, the Tata-Singapore Airlines JV carrier has signed similar agreements with parent Singapore Airlines, SilkAir, British Airways, Japan Airlines, United Airlines, and over a dozen interline agreements with other global carriers.

While IndiGo and SpiceJet expressed their intent to fly international long-haul flights in the recent years, Vistara has been explicit about such ambitions from the word go. The Gurgaon-headquartered airline waited for 20 aircraft in its fleet - a rule mandated by authorities to fly international - before it could launch its first international flight to Singapore in August this year.

Codeshare agreements are generally the first step towards flying long-haul international routes, especially for carriers such as Vistara, IndiGo and SpiceJet, which are yet to make a plunge in that segment. To be fair, all these carriers are flying outside of India on their own for a long time - but on short-distance routes covering largely the Gulf and South Asian regions. Long-haul flights are a totally different ball game though.

Low-cost carrier (LCC) IndiGo's long-haul ambitions came to the fore when it openly (in July 2017) said that it was interested in acquiring the international business of beleaguered Air India (AI). Later, IndiGo opted out of the AI's sale process. IndiGo has since then maintained that having wide-bodies in its fleet is more of an "aspirational" pursuit. The airline has been filing for slots in the London area for some time now. Recently, it has reportedly been granted those at the London Gatwick airport along with Vistara. Though it's not clear as to how IndiGo will fly directly to that airport without a wide-body aircraft unless it has plans to induct some that nobody is aware of right now.

SpiceJet, on the other hand, ordered 100 Boeing 737-MAX in January 2017 with an option of converting 50 of them into wide-body (like 787 Dreamliner) to start low-cost service to Birmingham in the UK.

While the plans of IndiGo and SpiceJet to operate direct flights are yet to fructify - they seem far into the future since both do not have wide-bodies to fly as far as UK. IndiGo has recently ordered 300 A320neo family aircraft - some of which are A321XLR that can fly longer range - yet it still doesn't have (or will have in the near future) planes that can fly to the Western Europe region, especially to the London area. Vistara, on the other hand, is busy stitching up deals to grow its international presence gradually with the help of partner airlines, which would eventually lead to it gaining confidence to fly long-haul on its own. Between the three of them, Vistara is the only carrier that has ordered wide-bodies - six Boeing 787-9 Dreamliners - two of which are scheduled to be delivered by March next year.

"For a small airline like Vistara, codeshare agreements are the right way to grow internationally. They seem to have taken a lead as IndiGo and SpiceJet are still trying to figure out their long-haul strategy," says an aviation consultant adding that given its size and scale, Vistara would begin with allowing foreign partner carriers to use their codes on its flights. "These foreign carriers would get access to Vistara's large network in India - which is also the case with Gulf carriers who have tied up with IndiGo and SpiceJet. But once Vistara establishes international routes - let's say a flight from Delhi to London - it would likely be using these (codeshare) agreements to put its code on partner airlines' flights to, say, North America," he says.

Going by reports, it seems that IndiGo and SpiceJet are planning flights to Europe and beyond with a one-stop strategy. SpiceJet's plans are out in the open, those of IndiGo are still a calculated guesswork. Last month, the Ajay Singh-controlled SpiceJet announced that it will set up a joint venture airline in Ras Al Khaimah (RAK), one of the seven emirates in UAE, along with a local partner as part of a deal with the RAK international airport to develop its airport as an aviation hub. The LCC would likely start flights to RAK early 2020, and having a base in RAK is going to open possibilities to tap large European market.

IndiGo too is reportedly mulling a base somewhere in Eurasia to connect further to Europe. Having one-stop flights indicates that they could use their existing narrow-bodies to fly to Europe. That makes sense since wide-bodies are not an easy game. They add significant complexities in airlines' operations, and come at huge costs. Having wide-bodies would mean different set of pilots, crew, engineering and maintenance staff. Also, the routes where wide-bodies are deployed take time to stabilize - at least a year if not more. Airlines have to prepare themselves to spend money for the first few years before they reap returns. Then there is always a risk of failure. Recently, Virgin Atlantic made a third attempt to launch Mumbai-London flight after losing money in the first two rounds. Virgin group founder Richard Branson said that the stupendous growth in the Mumbai market and lower capacity led to the re-start of the service.

Indeed, the grounding of Jet was a turning point for the sector. The activities on the long-haul segment picked up pace after the grounding of Jet in April this year. The vacuum created by Jet - which was strong in the long-haul segment with flights to Amsterdam, Hong Kong and London - presented domestic and global carriers with an opportunity to grab the market share.

Vistara again seems to have an advantage over others. How? IndiGo and SpiceJet have a wider variety of aircraft in their fleet. IndiGo, for instance, has Airbus A320s (ceos and neos), A321neos and ATR 72-600. It will add A321XLRs at some point in future. SpiceJet has Boeing 737 (700s, 800s, 900s, 900ERs), Bombardier Q400, and the grounded Boeing 737-MAX. In comparison, Vistara has Airbus 320s and Boeing 737-800NG and soon-to-be-inducted Boeing 787-9 Dreamliners. Typically, a simplified fleet gives an airline advantage in terms of cost and flexibility - the key aspects in the long-haul game.

The other big advantage for Vistara is that it operates in the premium segment, which makes it a preferred choice for Indians who generally prefer FSCs over LCCs in long-haul flights. Vistara currently has three class configurations in its aircraft, including premium economy, which gives an additional choice to customers who are willing to pay slightly more for better services. With the grounding of Jet, the FSC options have come down to choosing between Air India and foreign carriers. Although the concept of low-cost long-haul (LCLH) seems enticing for a budget-conscious Indian market, given that the model is facing headwinds globally - the pioneer of LCLH Norwegian Air is making huge losses - it would be too risky for Indian carriers to take that route.

"What works in Vistara's favour is that it has a more robust loyalty programme than SpiceJet. Frequent flier programmes are must for wide-body operations. IndiGo, which has so far focussed largely on its core principles rather than building customer loyalty, is probably weak on this front. It might tie-up with one of the global alliances in future," says an aviation blogger.

While IndiGo and SpiceJet are perhaps operationally and financially stronger than Vistara at this point, the backing of two parents - Singapore Airlines and Tata Group - would not deter Vistara from thinking long-term.