Wipro Consumer Care and Lighting, which crossed one billion ($1.03 billion) in fiscal year 2017-18, grew its revenues close to 8 per cent year-on-year in 2018-19, while the consolidated operating margins (including furniture and lighting) stood at around 14 per cent. Wipro, which started out as a vegetable oil company in 1945, shifted its focus to Information Technology services in early 80s. In 2012, the company decided to demerge its non-IT services into a separate private entity. A Kotak Securities report at the time said that Wipro's IT business contributed 86 per cent to its overall revenues of Rs 32,053 crore for the financial year 2011-12 and 94 per cent to its operating profit of Rs 6,413 crore. According to the company, the standalone revenues of the consumer care business stood at Rs 3460 crore for the same period. The annual revenue of Wipro Consumer Care and Lighting (WCCL) business came in at Rs 7,150 crore for the financial year 2018-19. The company, which crossed one billion ($1.03 billion) in fiscal year 2017-18, grew its revenues close to 8 per cent year-on-year in 2018-19, while the consolidated operating margins (including furniture and lighting) stood at around 14 per cent. Meanwhile, the standalone margin for the consumer care business was seen at a healthy 20 per cent. The company could only double its revenues in the last six years in a rather challenging macro-environment, but it laid claim to have toppled Hindustan Unilever's (HUL) Lux from the second spot with its brand Santoor in the toilet soap category, which is a 2000-crore turnover brand now. HUL's Lifebouy soap is the market leader in the segment. 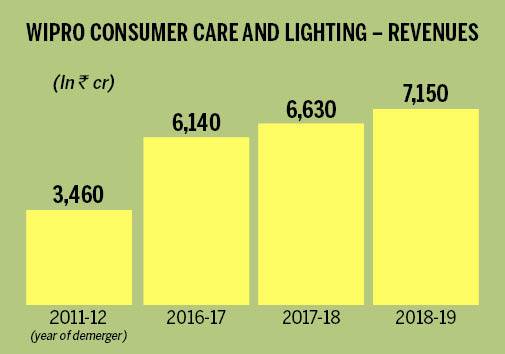 The man at the helm of the consumer care business, Vineet Agrawal, CEO, WCCL and Executive Director of  Wipro Enterprises, joined Wipro in 1985 straight out of a management school. He helped the company establish its personal care brands such as Santoor, Wipro Shikakai and Sunflower Vanaspati as national brands. In 2002, he was appointed as the head of consumer care business, a position which he has held for 17 years now. For a company whose 54 per cent of the revenues  come from its international business, the foundation was laid way back in late 2000. Competing with several other FMCG players, WCCL successfully closed a deal in 2007 to buy Singapore-based Unza Holdings with over 40 brands such as Enchanteur, Eversoft, among others, for $246 million. This was the first of many acquisitions of the company to establish its strong international footprint. "Good things don't come cheap. To that extent, it was not a cheap acquisition for us," said Agrawal on Unza's acquisition.

Analysts saw this as a bold move. However, the focus on emerging markets came from the very top. "Our Consumer Care and Lighting Business took a big leap by acquiring Unza, South East Asia's leading Personal Care Company. This is an important step for the business as we see large opportunities in the emerging Asian economies," said Azim Premji, Chairman, Wipro Enterprises (P) Limited and Wipro Limited. Unza till date is the company's biggest acquisition, which gave it an access to Malyasia, its biggest market outside of  India. Over the next decade, WCCL bought UK-based brand Yardley for Indian and Middle-East markets, followed by UK and Europe markets. In 2012, the company bought another Singapore-based firm LD Waxsons, which had leading skincare brands such as Bio-essence and Ginvera and health care brand Ebene that further strengthened its footprint in the South-East Asia market like Taiwan, Hong Kong  and Thailand.

The company forayed into the South China market with the acquWisition of Zhongshan Ma Er, a family-run business headquartered in South China's Guangdong province with a strong presence in shower products and liquid detergents. Today, China is its second biggest international market with a turnover of $125-130 million. The latest acquisition of personal care business of Filipino company Splash broke the barrier in the remaining South-East Asian market - Philippines. Among other brands, Splash owns SkinWhite - a strong brand in body lotions, Maxi-peel and Vitress. "Splash is one of our bigger acquisitions," said Agrawal as the company did not disclose the amount spent on acquisition. "This is an exciting milestone for us given our vision of being among top three players in Personal Care in Asia. Splash gives us a market leading position in Philippines, which is one of the strong economies in the region and a formidable personal care market," he added.

WCCL's international portfolio contributed 51 per cent to its total revenues in FY19. And, with the acquisition of Splash, the company expects the share of international revenues to go up to 54 per cent. The deal is expected to close by June this year, which will be margin accretive. Splash clocked in a revenue of 4.1 billion pesos ($80 million) in calendar year 2018. Currently, Malaysia is the single largest market outside of India with a turnover of $150 million, followed by China with a turnover of $125-130 million and now with Splash's acquisition, Philippines could well become the third largest market for the company. WCCL has a strong brand presence and a significant market share across segments in India, South East Asia, the Middle East and Africa. It has 15 manufacturing units in China, India, Indonesia, Malaysia and Vietnam and research and development (R&D) facilities in India and Malaysia. Raghav Swaminathan, CFO - Wipro Enterprises (P),  credits the successful  integration of the international entities to localisation. "While we have a few of our people, we try to maintain the local management and hire locally as much as we can to ensure no disruption takes place when we do acquisition," he said. WCCL took its bet on China with the acquisition of Zhongshan Ma Er. "We believe China is a large market. We are only present in South China at Guangdong district. In fact, we are putting up a large manufacturing plant there because we believe that China is the future," said Agrawal. The new plant, which is touted to be the second largest international manufacturing plant of the company, is being built in the Guangdong district with a capex of Rs 100-120 crore. "The new plant is likely to be operational by December 2019. With an addressable market of over 100 million people and GDP of close to one trillion, by any logic, south china is larger than any of south-east Asian countries," he added. Currently, Wipro stands at number three position in liquid detergents, shower products and roll-on segments and at number two in soap segment in South China market. 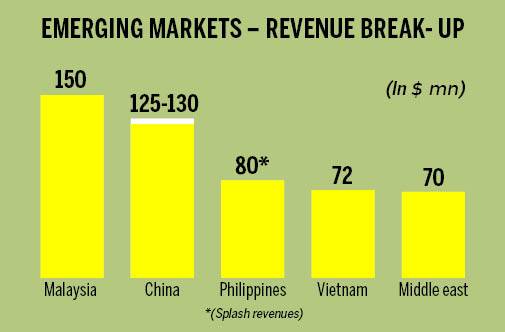 Being one of oldest FMCG companies in India, Wipro consumer care has diversified portfolio of personal and home care products with leading brands such as Santoor, Chandrika, Glucovita, Wipro Safewash and Wipro baby soft products. With revenues of around $500 million, India brings around 46 per cent of the revenues with Santoor alone doing Rs 2000 crore. "It is a brand, which, we believe, is a clear number two in toilet soaps. We believe so because no other toilet soap has called out itself as a Rs-2000 crore brand except for Lifeboy," says Agrawal. Looking at February numbers, he says, the Santoor brand stands right above Lifeboy in the urban market, being the number one there.

Meanwhile, one area that still remains a virgin territory for Wipro is the 'organic product' segment. Agrawal believes that there is still some confusion in the minds of the buyers under organic products categorisation. "I think there is confusion in the consumers' mind on how ayurveda, natural and organic products differ from each other, but there indeed is shift towards natural products and that is one of the reasons for the growth of Santoor as a brand," Agrawal said. However, he added that the company is not looking actively to launch products in the 'organic' segment.

While Santoor and Chandrika remain clear mass brands, the company experimented with niche urban and offline heavy brands such as Happily Unmarried and USTRAA by picking 21 per cent stake in Delhi-based Happily Unmarried Marketing Pvt. Ltd in 2017. Post Wipro's investment, both brands have leveraged the distribution network of WCCL to make a significant entry into the offline market. While the company said that it waded through the changes post the implementation of Goods and Services Tax (GST) without any disruption in the entire supply chain, the company anticipates some headwinds in India growth as the rural economy continues to remain under pressure.