Among 40-odd amendments brought about in the Companies Act 2013, the most notable ones relate to better governance and measures to curb corporate frauds

It's raining changes in the Companies Act 2013. The government managed to pass over 50 amendments in the last parliament session in the laws governing companies. While the government touts some of these changes to improve ease of doing business, the others are clearly aimed at tightening the noose around unscrupulous businesses.

From 40-plus amendments made in the Companies Act 2013, it comes across that the government is shifting the focus more on execution of the law. "If you see the amendments, the government is trying to make the execution very strict. They are increasing the penalties and offences bringing them in line with foreign laws," says Mamta Binani, Past President of The Institute of Company Secretaries of India (ICSI), a high court lawyer and an Insolvency Professional.

Atul Pandey, Partner, Khaitan & Co believes the changes have been introduced to ensure more accountability and better enforcement to strengthen the corporate governance norms and compliance management in the Indian corporate sector.

Among 40-odd amendments brought about in the Companies Act 2013, the most notable ones relate to better governance and measures to curb corporate frauds. 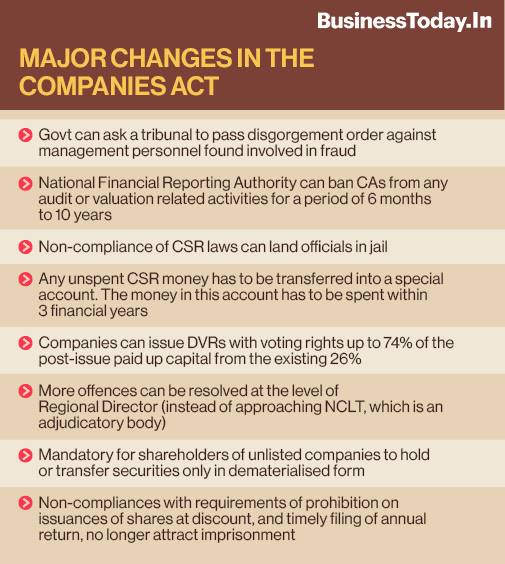 One of the most significant of them is if the government is of the opinion that a fraud has taken place, and the company's directors, key managerial people or officers have taken undue advantage or benefits, the government can approach the NCLT for disgorgement of such undue advantage. The government can also ask the NCLT for holding such directors, KMPs or officers personally liable without any limitation of liability. Repeated defaulters will now have to pay up to twice the penalty prescribed for the offences.

While this will act as a deterrent for  directors and senior officials from committing any fraud, the provision of holding such  officials personally liable without any limitation of liability is something unheard of, feels Ranjana Roy Gawai, founding and managing partner, RRG & Associates. She says that usually penalty prescribed in any law has a limit but the amendment prescribes unlimited liability for the offender.

In yet another amendment, the Act empowers the government to directly approach a tribunal - NCLT - to issue an order against persons responsible for mismanagement of the company. Earlier, the government could approach the tribunal only against a company if its affairs are conducted in a manner against the interest of public.

Currently, the National Financial reporting Authority (NFRA) has the power to bar a chartered accountant (CA) or a CA firm from practicing as a member of Institute of Chartered Accountants of India (ICAI) if any professional misconduct is proved against him/her or it. Now after the recent amendments, NFRA can ban them from any audit or valuation related activities for a period of six months to 10 years.

One of the changes that has not gone down well with the corporates is penal provisions for non-compliance of CSR provisions. The amendment prescribes penalty of Rs 50,000 to Rs 25 lakh and every officer concerned could face a jail term of up to three years. After much hullabaloo over this stringent provision, the government has promised to give it a second thought.

However, there is another provision that requires any unspent money to be transferred into a special account. The money in this account has to be spent within three financial years and failure to do so means the money has to be mandatorily transferred to funds specified by the government -- Clean Ganga Fund, prime minister's National Relief Fund and technology incubators in the central government-approved academic institutions.

One important change is in Section 90 of the Companies Act, which deals with reporting of significant beneficial ownership (persons with holdings, directly or indirectly, in a company with 10 per cent or more shareholding) in a company.

The amendment now requires every company to take necessary steps to identify an individual who is a significant beneficial owner in relation to the company and make him comply with the provisions of this section.

An important change is on rationalisation of offences for non-compliances with provisions of the Act. Non-compliance with requirements of prohibition on issuances of shares at discount and timely filing of annual return no longer attract imprisonment.  Penalty amounts for several offences have been reduced. More offences can be resolved at the level of Regional Director (instead of approaching NCLT, which is an adjudicatory body) as the upper threshold for bringing such offences to Regional Director has been increased from Rs 5 lakh to Rs 25 lakh.

"The sum result of such changes is that promoters and directors do not need to stay under the fear of prosecution for violations that do not have a scathing impact on interest of company's stakeholders," says Atul Pandey of Khaitan & Co.

A significant change has been made in terms of providing flexibility to an Indian holding/subsidiary/associate company of a foreign company to have a different financial year owing to requirements of the foreign country.

One important change made in the Companies Act on the request of start-ups and innovative technology company is related to the issuance of shares with Differential Voting Rights (DVRs).

The amendment now allows companies to issue DVRs with voting rights up to 74 per cent of the post-issue paid up capital from the existing 26 per cent. "This will allow promoters of Indian companies to retain control of their companies in their pursuit for growth and creation of long-term value for shareholders, even as they raise equity capital from global investors," says a PHD Chamber of Commerce in India statement.

All-in-all the focus of the amendments is to improve compliance by companies through stricter penal provisions and monitoring.  The government has in the past shown that it can come down heavily on non-compliant companies. It has struck off over 2.26 lakh non-compliant companies in 2017. With these amendments, while the government is sending a strong message that companies which cannot comply with the rules have no business to be in the business, it is also trying to ease some of the provisions to make compliance easier.