There are many sides to the debate around data localisation, or the Indian government's thrust to ensure that companies maintain data locally, within the borders of India. It will certainly increase the cost of doing business and compliance obligations for multinationals. Nevertheless, there are companies who aren't complaining - the technology firms who sell hardware, software and services as well as those who build datacentres. If you are to store every data locally, you could expect a huge upsurge in datacentre investments.

Datacentre operators, which include NTT Com-Netmagic , CtrlS, ESDS, ST Telemedia and Sify, among others, appear bullish at the prospects. "With data localisation legislations, absolute localisation of data and its storage and processing of personal data will be mandatory. This will lead to growth in the consumption and provisioning of storage in datacentres," Ranganath Sadasiva, Director, Enterprise Solutions, at market research firm IDC India, says.

"While we are seeing organisations reacting cautiously and are developing a strategy to identify, handle data localisation needs, the datacentre service providers are working on planning capability and capacity to handle these requests. We expect that in the next 12-24 months, incremental and additional capacity building will happen in the market," he adds. 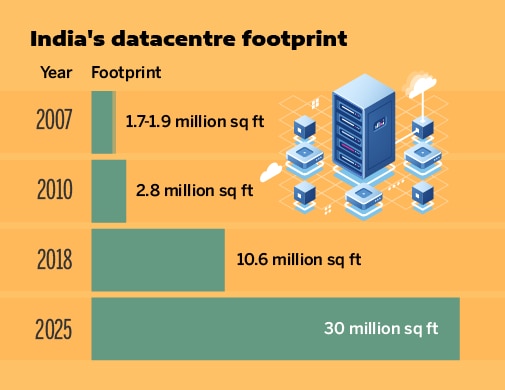 Data localisation will drive much of this growth. "It is going to bring back tons of data back to India," Rao predicts. For instance, earlier, an Australian bank with an Indian branch would have stored data in servers in Singapore. Now, they would be compelled to either rent a premise and build their server rooms in India or outsource to datacentre service providers. "Data localisation is going to encourage media, banking, insurance, manufacturing, e-commerce and retail companies to bring back the data to India in 18-24 months. The bill (Personal Data Protection Bill, 2018) is likely to be passed after the government is formed either in the first or second session of Parliament. It will be a reality in less than a year," Rao says.

Netmagic states that digital data is estimated to increase from 40,000 petabytes in 2010 to about 2.3 million petabytes in 2020 - which is twice the global rate. "India is thus set to become the fifth-largest investor in the datacentre market by 2050. We are witnessing the maximum demand in Mumbai, from the global hyper-scalers. A lot of this can be attributed to the data localisation policy. Also, if your servers are in India, the roundtrip time for your customers to connect is faster. All these are definitely some good drivers for the business," Nitin Mishra, Senior Vice President and Chief Product Officer of NTT Com - Netmagic says.

There are challenges in meeting this demand, nevertheless. India does not have the capacity that would be required. B.S. Rao of CtrlS Datacenters estimates the current available capacity at around 30-35 per cent. "So, of the 10.9 million square feet footprint, about 3.5 million may be available. The requirement could be three-four times this number if there is a rush of data back to India," he says.

CtrlS is investing "a few thousand crores" in building five million square feet of additional capacity - two million in Mumbai, two million in Hyderabad, and one million in Chennai. These facilities would be up over the next 18-24 months.

NTT Com-Netmagic has nine datacentres overall: five in Mumbai, two in Bangalore, and one each in Chennai and Noida. The datacentre in Mumbai is its biggest facility, spread over 3,00,000 square feet. "Going forward, we intend to expand our datacentre footprint with the establishment of large campuses in Mumbai and Chennai, in addition to exploring possibilities in Kolkata," Nitin Mishra says.

"While choosing sites for datacentres, we have three criteria - the availability of power, fibre connectivity and local business. Kolkata is well-endowed with the first two and even if the volume of local business doesn't match that of Mumbai, it is large enough," Mishra adds.

Ask Ranganath Sadasiva of IDC India and he lists a few challenges that operators in India would need to handle, beyond expanding on capacity.

"We see vendors will have to prove their localised datacentre capabilities along with comprehensive 360-degree security, which will become a key factor for vendor evaluation and selection," he says. Sadasiva also sees skills as an important issue. "Additional skills like management across datacentre components, security and compliance to match the demand and complexity will become important for all players in this space," he adds.

If the service providers manage to fix all the pieces in this puzzle, there could be gold in this data rush.