News
BT BUZZ
News
BT Buzz: With or without Modi, 'achche din' ahead for Ayushman Bharat

The pet scheme of PM Narendra Modi aims to provide a benefit cover of Rs 500,000 per family per year for tertiary and secondary treatment to 10.74 crore poor, rural families

Congress-ruled Punjab and Puducherry are likely to become part of Ayushman Bharat scheme around June 1.

In all likelihood, Congress-ruled Punjab will become part of Ayushman Bharat Pradhan Mantri Jan Aarogya Yojana (AB-PMJAY) health assurance scheme on June 1, a week after the results of the ongoing general elections will be declared.

Congress-led government of Union Territory Puducherry might also operationalise the scheme by around the same time. Kerala, ruled by the Left Front led by Communist Party of India (Marxist), one of the strongest critics of PMJAY launched by Narendra Modi government during the fag end of its term seven months ago, already joined the scheme on April 1.

The pet scheme of Modi aims to provide a benefit cover of Rs. 500,000 per family per year (on a family floater basis) for tertiary and secondary treatment to 10.74 crore poor, rural families. According to the latest Socio-Economic Caste Census (SECC) data, the approximate number of beneficiaries would be 50 crore. The biggest hurdle for the scheme was a potential boycott by states ruled by non-BJP political parties and fronts, which it seems to have crossed now.

In less than a year, 33 out of 36 states and Union Territories of India have signed MoUs with the National Health Authority (NHA), the body that is in charge of the rollout, implementation and management of PMJAY. It is already operational in 30. There had been an apprehension that Congress-ruled states--especially the governments of Madhya Pradesh, Rajasthan and Chhattisgarh, where recent elections saw the toppling of BJP regimes--might withdraw from the scheme. They perceived it to be launched at a politically convenient time to help BJP win votes in the elections. However, these states continue to be part of the scheme. Punjab and Puducherry did ignore the scheme, but it is becoming clear now, the Congress governments are just waiting for the election dust to settle to be a part of it. Apart from West Bengal, which withdrew from the scheme, complaining that PM Modi was taking entire credit for introducing PMJAY, no other state has taken back its commitment to be part of the scheme.

Launched on 23 September 2018, the scheme has so far benefited 23.8 lakh patients (till May 11, 2019), with a majority of the treatments happening in the area of cancer, heart ailments, bone-related problems and kidney ailments. The scheme covers medical and hospitalisation expenses for almost all secondary care and most of the tertiary care procedures as PMJAY has defined 1,350 medical packages covering surgery, medical and daycare treatments including medicines, diagnostics and transport.  "We aim to get all states on board. Our initial target of hospitals was 10,000, we have crossed that. The initial target for enrolment was 2 crore (beneficiaries), we crossed 3 crore. We plan to continue implementation. The scheme is driven by states", says Dinesh Arora, Deputy CEO, NHA. 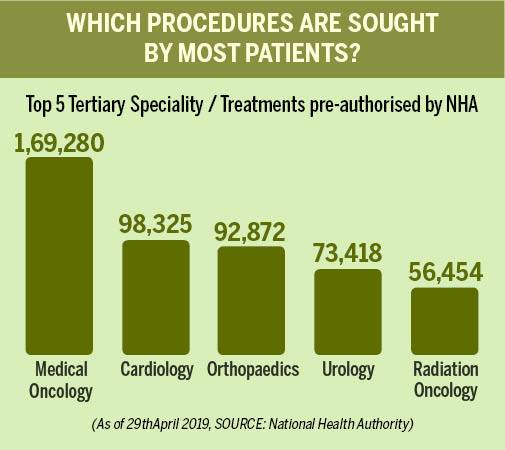 The states ruled by the opposition parties have decided to be part of the national scheme, but their main criticism was not merely political. The centre and states share the expenses in the 60:40 ratio in general category states and 90:10 in the case of North Eastern states and the three Himalayan states of Himachal Pradesh, Uttarakhand and Jammu & Kashmir. The scheme is 100 per cent central funded only in Union Territories without state legislature. In terms of responsibility, though, PMJAY is more about states than the centre. The state governments empanel the private hospitals (government hospitals are automatically empanelled), decide how to implement the scheme (choose between various models, insurance, direct government funding, or a mix of both), set up trusts to facilitate payment in case the government wants to pay for the medical expenses, select insurance companies through tenders if it is a medical insurance pure play and track malpractices.

The NHA's role is limited to coordinating various activities in different states through its IT backbone, streamlining of central share of the payment and facilitating inter-state portability of scheme's benefits. Further, state-level health assurance schemes have been going on in many parts of the country for years now. The PMJAY's IT platform itself is a tweaked version of the IT system that powered the successful Arogyasri health insurance programme of the Telangana state. Even the Central Government had its own health insurance scheme Rashtriya Swasthya Bima Yojana (RSBY), though its coverage universe was much small compared to PMJAY, as it covered just the unorganised workers and their families. The states also have the flexibility to expand the scope of health coverage beyond what is offered under PMJAY. Kerala, for instance, offers one such example. When the state decided to embrace PMJAY, it opted for an insurance model, selected Reliance General Insurance through a tender, and made the beneficiary universe much wider. "To be more inclusive, the state has extended the coverage to additional categories of families (21 lakh) besides the identified 20 lakh SECC families (Socio-Economic Caste Census). For beneficiaries, the new schemes offer much wider coverage by including the tertiary care and increased participation by private hospitals," Rakesh Jain, ED & CEO, Reliance General Insurance says. The importance of PMJAY will be more evident in the greenfield states (which did not have such healthcare insurance schemes) in the coming days as it not only triggered the implementation but has also created a dedicated agency--NHA--to provide support for rolling out such programmes. The size of the programme and the potential volumes involved also helps NHA negotiate a pricing system that is the lowest possible. "As of now, we have spent around Rs 2600 crores, in the last six months. Our rates are really 50 per cent lower than the market rates, so if they (beneficiaries) had gone for treatment out of pocket, they would have spent Rs 5000 crores," Arora says.

The checks and balances brought in as part of the scheme may also result in fraud detection. For instance, two hospitals in Jharkhand have been suspended for charging money from the beneficiaries and for carrying out wrongful diagnosis and admissions. Similarly, six hospitals in Uttarakhand received show-cause notices for indulging in activities of potentially fraudulent nature after NHA's fraud detection systems threw up some leads like a single doctor, registered as a consultant or full-time in various hospitals, performing procedures at the same time and doubts about money charged by the hospital from beneficiaries. A hospital preparing discharge summary for a large number of patients in a day could be checked for the possibility of fudging documents. If the pre-authorisation date, date of approval and surgery date happens to be the same, questions on the quality of care could be raised. Same packages, blocked for almost all patients of all family treated at the same time, can also trigger an alert. The fraud analytics is being carried out by global analytics firms SAS, MFX, Lexis Nexis, Optum and Greenojo by making use of rule engines and artificial intelligence layer since January. "As of now, they are developing proof of concept. We will have to tender it out later. They are doing pro bono for six months. Twenty four companies applied, of which five got selected for this purpose. We will evaluate their performance, see how good the triggers generated by them are and then go for the quotation (for tenders)," Arora says.

The IT backbone, which is fully operational, is handled by private and public sector entities - NIC, C-DAC, TCL (Tata Communication Ltd for servers) and TCS.

However, the biggest difference NHA makes is the national portability of services. Delhi, which is one of the three states that have not joined the scheme so far (Telangana and Odhisa are the other two), has about 20 hospitals that are empanelled with NHA to offer services to PM-JAY beneficiaries of other states. The credit for the fact that these hospitals will get paid by the respective state governments in a seamless manner goes to the scheme. 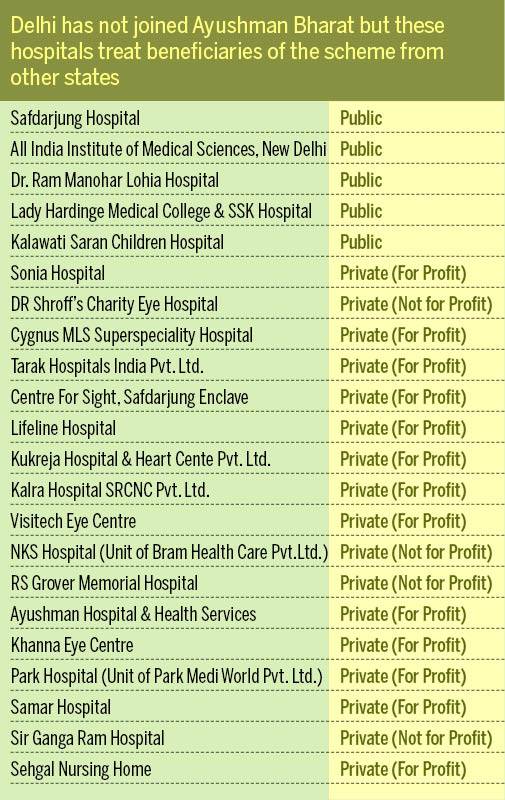 With almost every state on board, the next challenge before NHA is to get more people in the greenfield to avail the facilities of the scheme. In fact, greenfield states are more in number -- Chhattisgarh, Jharkhand, Bihar, UP, Assam and eight North Eastern states, J&K, Haryana, MP, Himachal and Uttarakhand and the number of patients that get treated here is just one person per hospital a day. In other words, the overall numbers of treatments look respectable because it also adds the patients from states, which already had some health insurance programme of others even before the launch of PMJAY.

"On an average across the country, we are touching around 15,000 patients every day, those from greenfield states could be around 50 per cent of that," Arora admits. Since the number of empanelled hospitals in greenfield states is just over 7000, this translates to one person a day per hospital. "Yes, but it is a demand-driven programme. We don't want people to fall sick. This is not for the whole population; it is only for 40 per cent of the lowermost (economic and social rung of the society). So demand has to increase. Awareness is a continuing process. It has (awareness creation) slowed down because of elections as Election Commission doesn't allow (awareness) camps to be held now. It will improve," Arora adds.

Enrolling the best healthcare centres, especially tertiary private healthcare facilities, into the programme is also critical to its success as healthcare infrastructure will require a major boost once the demand picks up. The super speciality private hospitals in metros, at least are not at all happy with the price offered by NHA for most of the treatment packages. While about 50 per cent of the 15,400 empanelled hospitals are private, they contribute to over 60 per cent of the actual treatments and procedures that are being offered. This makes private participation even more crucial to the success of the programme. The states have the flexibility to increase the NHA fixed rates by 10 per cent. If the existing rates of the brownfield states are higher, they can continue to offer those rates to hospitals. There are also additional incentives to medical colleges, to hospitals in backward districts and hospitals that are accredited by the National Accreditation Board for Hospitals & Healthcare Providers. The cumulative difference in rates could be as high as 39 per cent. But still bigger players complain. "There is huge positive response; hospitals in small towns have no problem. However, in certain metros and bigger cities, I think the cost structures need to be rationalised as the cost structures there are different. They have been saying some rationalisation is required," Arora says.

Will NHA get the government to do it?

"We will see after elections", he adds.