The fight isn't over yet. While most aggregators - the likes of Eazydiner and Dineout - have agreed to limit discounting, Zomato is still reluctant

There are things that are surprising about the National Restaurant Association of India (NRAI)'s #logout movement.

It all started on August 14 "to detox customers from discount addiction and give the restaurant Industry freedom from aggregators who have distorted a vibrant marketplace by aggressive discounting and predatory pricing". In the following days, about 2,000 restaurants stated that they would not be part of any "1+1" deals or where they had signed up for 50 per cent discounts on food and drinks. Everyone loves a free meal. But deep discounting isn't always great for businesses - restaurants are already struggling with increasing raw material and higher real estate costs.

Why now? Certainly, "1+1" deals have been on the table for some time.

Much of NRAI's ire is directed at Zomato, whose 'Gold' programme offers complimentary food and drinks to diners. Surprisingly, the association appeared quite pally with Zomato even till May, when it launched its India Food Services Report 2019. Zomato was both a sponsor and data partner to the report. 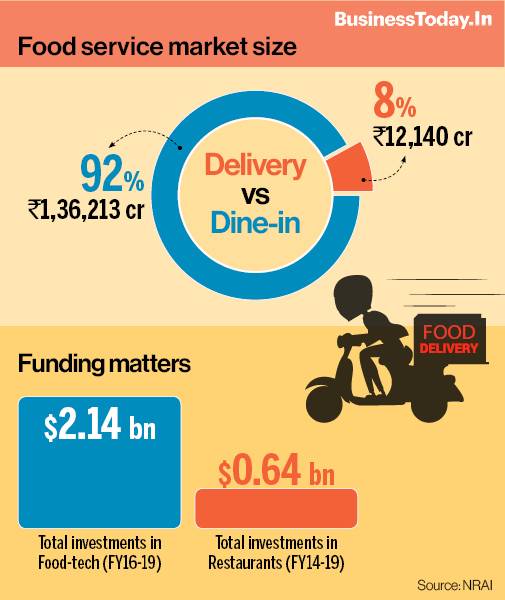 What went wrong over the next three months? There are multiple flavours to this.

On August 13, NRAI held a meeting with Gurugram restaurateurs. The body later stated that it was "to discuss the prevailing concerns and issues regarding food service aggregators and it was unanimously decided by 300 restaurateurs to immediately #logout from all dine-in platforms to silently protest against deep discounting". While restaurateurs are not explaining the 'why now' part very well, it is seemingly because they are worried about the downturn in the economy. Consumers have cut back on discretionary spending, everything from buying underwear to TVs. Eating out would soon be a casualty too. Deep discounting in a slowdown year would hurt more.

The second reason is the realisation that '1+1' deals are not bringing in the topline expected. The business premise for aggregators is that they help in capacity utilisation - more footfalls. But after many months of not so great experiences, restaurants are revolting. Deals, typically, work in non-peak hours but many aggregators forced restaurants to offer them seven days a week, at all times. Rahul Singh, President of NRAI and founder of The Beer Cafe told Business Today that aggregators created FOMO (fear of missing out) among restaurants to make them sign these deals. "The neighbouring restaurant did it, so why don't you? They created fear psychosis. Now people have realised that their topline hasn't increased and the bottomline has eroded too," he said.

Riyaaz Amlani, CEO and Managing Director of Impresario Entertainment & Hospitality, which runs restaurants such as Social and Smoke House Deli, said that there is severe value erosion in such deep discounting. If a restaurant is reducing its topline by 50 per cent, it needs a 100 per cent jump in sales to make up. "That is not happening. You will see a 3-4 per cent increase. That has brought down the topline significantly and completely decimated the bottomline," he explained.

There is a far bigger reason to worry about, going ahead. The centre of action, in food-tech, was the delivery market. The action will now shift more and more to dine-in because this is simply a far larger piece of the pie. The dine-in market contributes 92 per cent (Rs 1,36,213 crore) of the overall organised food service market in India, according to the NRAI India Food Services Report 2019. The delivery market contributes just eight per cent (Rs 12,140 crore). As food-tech aggregators shift their attention to dine-in, a hyper competitive scenario between them can lead to market distortions such as deep discounting.

It already has, according to NRAI. In a note, the body stated: "NRAI held extensive meetings with all restaurant aggregators and we were bemused to learn that aggregators were promoting deep-discounts to stay competitive amongst each other. While one aggregator gave 1+1, the other had to adopt a 50 per cent discount scheme in order to stay relevant". The point is, unlike in the early years of e-commerce in India, it is not the marketplace that is bearing the discount here. Restaurants are paying for the one extra dish. The annual subscription the consumer pays to the aggregator is pocketed just by the aggregator. The spoils aren't shared.

A fourth issue in the NRAI campaign is gaming of the system by the consumer. Zomato appears to have addressed this. Soon after the #logout campaign started, Deepinder Goyal, Founder, Zomato said he is "reconstructing Gold to help drive better profit margins" for restaurants. "The biggest pain point we heard was that users hop between places on a busy evening, claiming 1+1 starters at one place, 1+1 main course at another, and 2+2 drinks at some other. To solve this, we will limit Gold usage by a single user to one unlock per day. This will ensure that customers complete their dining experience at a single restaurant, bringing the net effective discount down significantly," Goyal wrote to restaurant owners.

A final reason for the #logout movement appears to be fear (and a hint of jealousy). Food-tech aggregators have been able to raise far higher investments over the last four-five years than restaurants. According to the NRAI India Food Services Report 2019, while the capital invested in the food-tech space between FY16-FY19 is around $2.14 billion, capital invested in the restaurant segment totals just $635 million between FY14-FY19. The aggregators have used the capital to invest in data science and now, they know far more about consumer preferences, what moves where etc. than brick and mortar restaurants.

"Using big data, the aggregators have figured out what dishes sell more in what region. Then they have created dark kitchens (cloud kitchens). If a consumer searches for pizza, what is stopping them from diverting the traffic to their kitchen? It is use of a dominant position. It's scary what these guys are trying," a restaurant owner said.

The fight isn't over yet. While most aggregators - the likes of Eazydiner and Dineout - have agreed to limit discounting, Zomato is still reluctant. Consumers would still love a free meal. Clearly, a middle ground needs to be found that works for every stakeholder in this three-way muddle.