Approval to explore new COVID-19 therapies, licensing and supply deals to manufacture drugs to treat the virus and fast approvals for plants under regulatory scanner have turned the fortunes of most of these companies 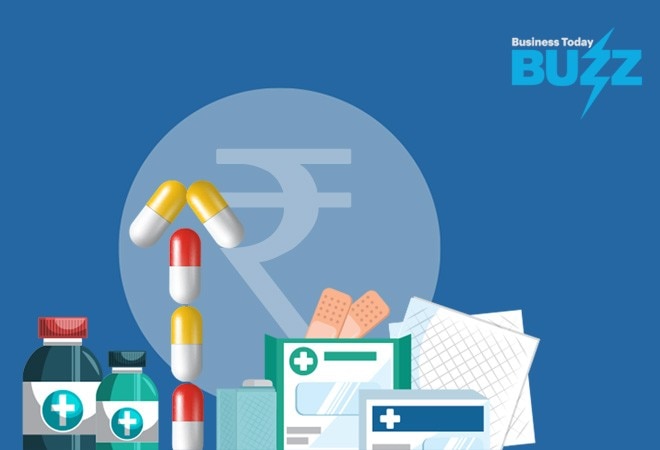 A dozen listed pharmaceutical companies, including leaders such as Sun Pharmaceuticals, Cipla, Dr Reddy's Lab, Biocon, Glenmark and Jubilant Life Sciences, gained over Rs 86,000 crore in market capitalisation over the last two months. The stocks of the companies surged because of unexpected opportunity created by COVID-19, while most other businesses reeled under lockdown blues. 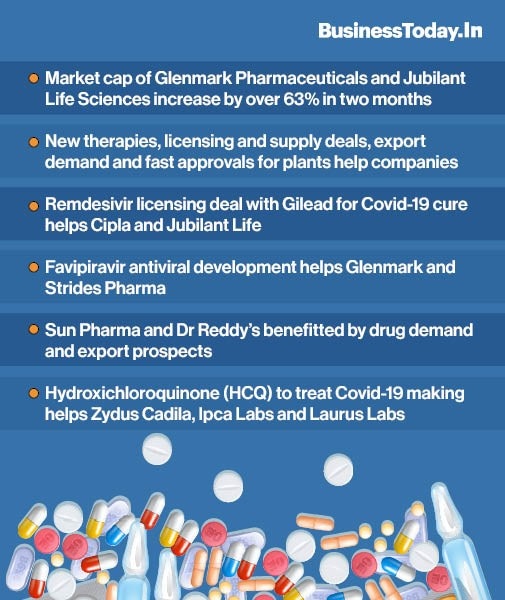 Approval to explore new COVID-19 therapies, licensing and supply deals to manufacture drugs to treat the virus and fast approvals for plants under regulatory scanner have turned the fortunes of most of these companies. The S&P BSE Healthcare index moved up by 28 per cent to Rs 11,992 crore market cap until May 20 from Rs 15,354 crore on March 20. The index had fallen 7.9 per cent during the six months prior to March 20. By comparison, the S&P BSE Sensex moved only 3 per cent in the two months up to May 20. The biggest gainers were Glenmark Pharmaceuticals and Jubilant Life Sciences. Both gained 63.4 per cent and 63 per cent market cap, respectively between March  20 and May 20. Glenmark, which had lost 40.2 per cent of its market capitalisation to Rs 5,940 crore during six months between September 20, 2019 and March 20, 2020, increased its market cap to Rs 9937 crore between March 20 and May 20. Glenmark is the first Indian company to receive approval from the Drug Controller General of India (DCGI) to conduct clinical trials of Favipiravir antiviral tablets, used in the treatment of novel influenza virus infections, to be used as a treatment for COVID-19 patients.  Further, Glenmark this week said a new clinical trial will begin to test a combination of two anti-viral drugs - favipiravir and umifenovir - as a potential COVID-19 treatment.

Jubilant Life Sciences, which had lost its market capitalisation by 47.5 per cent during six months prior to March 20 to Rs 4,470 crore, gained Rs 7,389 crore in the next two months. In early April, the US Food and Drug Administration (FDA) had cleared its tablet making facility at Salisbury, Maryland in the US. Soon after ace investor Rakesh Jhunjhunwala had hiked his stake to 4.41 per cent from 3.45 per cent earlier. On May 12, the US drug maker Gilead Sciences signed licensing agreements with Jubilant, Cipla and Hetero Drugs to make  anti-viral drug Remdesivir, seen as the most promising potential therapy for COVID -19 for distribution in 127 countries.

Cipla, one among the globally reputed drug makers for its strength in anti-viral and respiratory drugs, is another major gainer of COVID-19 remedy expectations. If Cipla's market capitalisation had eroded by 15 per cent to Rs 31,733 crore during six months prior to March 20, its market capitalisation went up by 57.6 per cent in two months to reach Rs 50,015 crore by May 20. Other than the Remdesivir manufacturing deal, Cipla successfully completed final phase trial for a generic asthma inhalation powder generic of GSK's Advair Diskus, and has applied to sell in the US. Besides, recently it got approval for a nasal spray for treating migraine with a special 180-day exclusive sale opportunity in the US.

India's largest drug company Sun Pharma, which has not yet revealed any specific corona therapies in the making except reports of  re-purposing a herbal cure for dengue under development for treating corona patients, got its market capitaliation increase by 24.6 per cent in the two months from Rs 87,768 crore to Rs 1,09,326 crore. During six months prior to March 20, Sun Pharma had lost 11.6 per cent of its market capitalisation, mainly due to continuing issues at its US-focused plant at Halol, in Gujarat and an eroding US business.

In the case of Dr Reddy's, which had recorded profits in recent quarters, its market capitalisation went up from Rs 48,158 crore to Rs 64,986 crore, a jump of 34.9 per cent, which was just 2.5 per cent in the preceding six months. Dr Reddy's in the recent months had got clearance from the USFDA for its Srikakulam plant. It is also developing a few therapies for COVID-19, including Hydroxychloroquine.

ALSO READ: Hydroxycloroquine can be given under supervision, side effects can be tackled: Indian-American doctor

Another drug maker which benefited by COVID-19 is Strides Pharma Science. Its market cap had fallen by 15.8 per cent to Rs  2,715 crore during six months prior to March 20, which shot up by 38.9 per cent to Rs 3,771 crore between March 20 and May 20, thanks to developing and commercialising Favipiravir antiviral tablets to treat Corona infected patients. Strides Pharma was also the first Indian company to export Favipiravir tablets.

Bangalore-based biotech major Biocon and its contract manufacturing arm Syngene International also saw share prices rise sharply during the period. Biocon got quick clearance from the USFDA for some of its critical plants in India and Malaysia and got emergency use approval from the US and Indian regulators for CytoSorb, a blood purifying medical device for COVID-19 patients admitted in ICUs with confirmed or imminent respiratory failure. Biocon is working on re-purposing its novel biologic Itolizumab for psoriasis to treat COVID-19 complications. Syngene, which reported profits in Q4 of FY21, also developed a COVID-19 RT-PCR based testing kit for COVID-19 patients. No wonder, Biocon's market cap jumped 26.4 per cent from Rs 32,982 crore on March 20 to Rs 41,676 crore in just two months. Syngene, which lost 24.7 per cent of its market capitalisation during six months prior to March 20 to Rs 9,544 crore, jumped 46.8 per cent to Rs 14,014 over the next two months.