The past performance on promises does not inspire confidence in the future. But if one goes by intentions alone, this is a budget that is hard to fault. 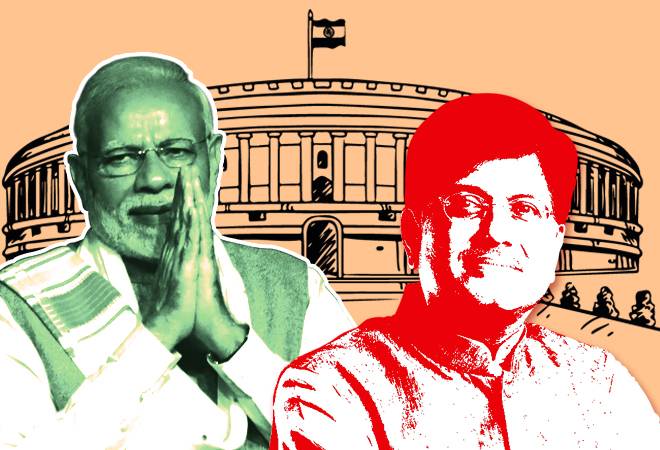 Interim Finance Minister Piyush Goyal's maiden Budget presentation today was part Budget speech, and part election pitch. The first part of the speech focused on the macro-economic stability this government had managed to ensure despite inheriting an economy in shambles four and a half years ago. Inflation, Fiscal Deficit, Current Account Deficit were all down - while growth was on a firm footing. There was much comparison with the economic record of UPA 2. (But not UPA1, against which the current government's performance would look a bit weak). He also dwelled on the other problems the UPA2 left it - from unfinished infrastructure projects to bad bank loans buried under the carpet.

He also talked about the big structural reforms - the insolvency and bankruptcy code, and the Goods and Services Tax (GST). He deftly avoided the inconvenient questions about this government - the lack of reliable official data in most areas, the record rise in unemployment, the dismal record on export growth, the failure of Make in India to really make the country a manufacturing powerhouse. (Mr Goyal talked about the success of Make in India and how it made India a hub for manufacturing auto and defense. But auto industry had made India a hub before his government came in, and since then manufacturing has not really managed to take off in other sectors except some mobile handset factories that are mostly assembly operations.)

As expected, the big announcements for the farmers came in the middle of the speech. If Rahul Gandhi was offering a sort of income guarantee for small and marginal farmers, Piyush Goyal went one step further - Rs 6000 per annum to farmers cultivating up to 2 hectares of land as income support, to be directly credited to their accounts in three instalments of Rs 2000 each. This is bigger than what Mr Gandhi was promising and should fetch him votes, especially after the first instalment is transferred to farmers. (This comes into effect from December 2018 so farmers are likely to get 2 installments before they go out to vote).

The other big announcement was pension for the poor workers, which is certainly a step in the right direction. (It would be a co-pay contribution, which would need the workers to contribute first to get any benefits.) Though it is a long way to go from a proper social security scheme for the aged, it marks a start at least.

Reading between the lines, there seems to be a concerted effort to revive real estate, which has been hit by demonetisation and GST and builder defaults. There were sops for buyers and for sellers. The government realises that real estate was the biggest creator of jobs at the lowest levels during its boom years, and that is why it is important to revive it once again now that unemployment is at record levels. (Even the sops for taxpayers were mostly to do with buying and selling houses for their own stay).

At the fag end of his speech, the interim FM unveiled the vision for the next 10 years. Whether any of that is achievable or even whether the government (and the BJP) actually has a proper roadmap is of course suspect. The past performance on promises does not inspire confidence in the future. But if one goes by intentions alone, this is a budget that is hard to fault.

The other question is whether it will lead to a headache for the new government and finance minister, because the resources will have to be generated and there seems little clarity on how revenues will go up sharply for all these additional giveaways. But then, that is for the next finance minister to handle.

Budget 2019: No, your income tax exemption limit has not been doubled