Union Budget 2020: At a time when poverty, hunger and income inequality are growing in 22 to 25 states and UTs, out of 28 that the Niti Aayog mapped in 2018 and 2019, disinvesting stakes in CPSEs to meet budget expenditure may not be the wisest thing to do

Budget 2020: The CAG has recently unravelled that the very objectives of disinvestments are not being achieved in its audit report tabled in the Parliament on December 10, 2019
Prasanna Mohanty

Budget 2020: Last week, Business Today had shown how 'strategic disinvestment' in central public sector enterprises (CPSEs), the tabs for which were picked up by other CPSEs, seriously damage the financial health of such undertakings and also endanger the fiscal management because of off-budget methods.

That is because for the first time in at least two decades India faces fall in its direct tax collections in the current fiscal (FY20) by about 10% below FY19.

But there is more to disinvestment than these. The comptroller and auditor General of India (CAG) has recently unravelled that the very objectives of disinvestments are not being achieved in its audit report tabled in the Parliament on December 10, 2019.

The CAG examined the disinvestments in 2017-18 - the year the central government earned the most (Rs 100,056.9 crore) - to determine if the objectives were met.

Before listing out its findings, here is a snapshot of the disinvestment proceeds. 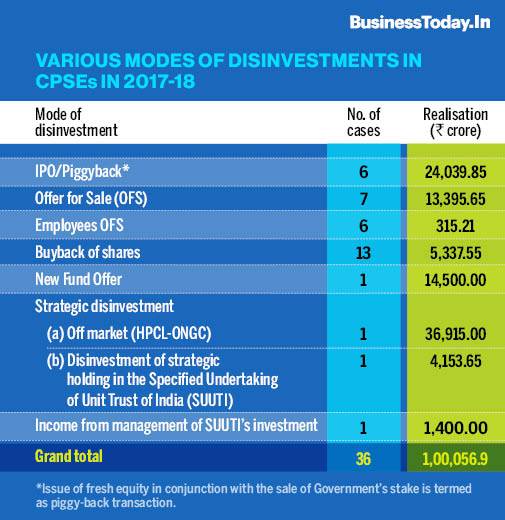 Key findings of the CAG audit:

1. The Department of Investment and Public Asset Management (DIPAM), which is in charge of the management of disinvestment in CPSEs - did not provide full information making it difficult to assess fully if the objectives were met. However, it did flag off several cases where the objectives were not met. About not providing full information, it pointed at the LIC's participation in 3 IPOs and one offer for sale (OFS) but the DIPAM provided details only in two cases. The LIC picked up 68.62% of the HAL's shares on offer and 33.56% of that of Mishra Dhatu Nigam Limited (MIDHANI).

2. Minimum Public Shareholding (MSP) in CPSEs not met in 17 listed CPSEs: One of the disinvestment goals is to have a minimum public shareholding of 25% in listed CPSEs by August 2017 to ensure that its wealth rests in the hands of public.

This was sought to be done through three methods.

(a) Disinvestment through IPOs: Out of six CPSEs, public response for three - HAL, GIC and NIACL - was very poor. The DIPAM's explanation for the poor response was dismissed by the CAG which said it "did not contain either reasons for low retail investor participation or remedial steps..." and asked the department to introspect. The CAG commented that the retail individual investors" quota in 50% of the number of IPOs brought out during 2017-18 remained significantly under-subscribed in the case of HAL, GIC and NIACL and consequently, "the objective as envisaged for retail individual investors in the disinvestment policy could not be fully achieved". It responded to the DIPAM's explanations for poor response saying that there is a "need for better analysis".

(b) 'Notional loss' in OFS in case of MMTC and STC: The CAG pointed out that though officially announced, disinvestment was not carried out for the MMTC and STC. The announcement, however, led to a fall in share prices causing 'notional' losses. It dismissed DIPAM's explanation as "not tenable" - a phrase that recurred repeated several times in the audit.

(c) Realisation through Employees OFS not achieved due to omissions and commissions of DIPAM, including non-execution of it in 3 CPSEs - NMDC, RCFL and NFL.

The overall picture that emerged after the deadline for off-loading 25% shares to public ended on August 21, 2017 is presented in the graph below. 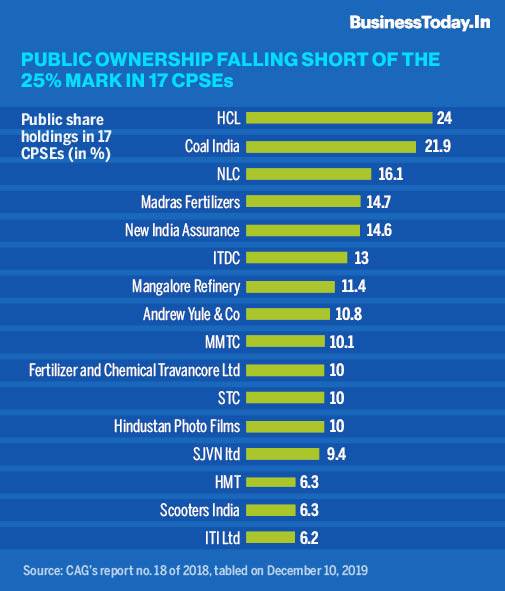 3. Strategic disinvestment approved for 24 CPSEs but could materialise only in one case - HPCL. Another CPSE, ONGC, picked up the tab. The CAG said it "could not derive an assurance that the price was correctly arrived at".

4. Disinvestment of strategic holding in the Specified Undertaking of Unit Trust of India (SUUTI) - which held shares of blue-chip private companies like Axis Bank (11.47%), ITC (9.08%) and L&T (6.55%) - were used as "sweetener" to increase the attractiveness of some CPSUs.

The CAG said these were "very liquid, good pedigree stocks" which could "comfortably attract high net-worth investors (HNIs) to fetch better price and higher rate" and that the Department of Economic Affairs (DEA) had specifically advised against it. This led to an "avoidable discount of Rs 170.74 crore".

5. Closure of SNIF: The Special National Investment Fund (SNIF) was set up in 2013 for meeting the MSP norm - which was 10% then and was raised to 25% in 2017 - and the proceeds were "to be utilised for social sector schemes of the Government".

Up to 10% shares of six CPSEs were transferred to it but the DIPAM made "no efforts" to disinvest. Not just that. The CAG found no information about the SNIF's organisational structure, officials appointed for disposing of those shares, even "owners of the fund were not found available from the records".

Also Read: Budget 2020: What FM Sitharaman must do to revive economy, consumer demand

The significance of CAG's findings would be clearer by recalling the disinvestment policy. It has been reproduced in the following box. Disinvestment is a part of the larger privatisation process (converting state-owned enterprises to privately managed ones) set by the World Bank (WB) and International Monetary Fund (IMF) in 1980s in response to disappointing performance of public companies in the developed world - better known as the Washington Consensus.

India initiated disinvestment in 1991-92 as part of the same process - which spread over Asia, Latin America, and Africa and the transition economies in Central and Eastern Europe.

While privatisation was seen as the panacea for development and human welfare then, it is no longer seen as that. On the contrary, several global studies and well known economists, including the World Bank, have said in the past few years that privatisation causes more harm than good.

In October 2018, a UN report on the effect of privatisation on human rights severely criticised the WB-IMF for promoting it by saying that widespread privatisation of public goods "often involves the systematic elimination of human rights protections and further marginalisation of the interests of low-income earners and those living in poverty". In 2015, while launching the Sustainable Development Goals (SDG) 2030, a UNDP report 'Is the private Sector more Efficient? A cautionary tale' made two telling points: (a) "no model of ownership" - public, private or mixed - "is intrinsically more efficient than the others" (b) efficiency of service depends on competition, regulation, autonomy and wider financial and legal institutional development. 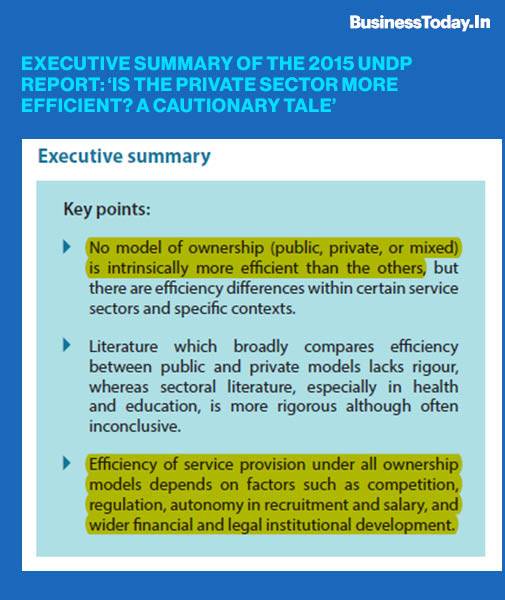 The report went on to add that global evidence showed a positive outcome was more likely in developed countries but a mixed one in the middle income and developing countries.

Nobel laureate Joseph Stiglitz, once a part of the Washington Consensus, wrote in 2008 that: "...while there have been some successful cases of privatisation, it has often turned out to be more disappointing than some of its advocates originally expected, and in some places, it has generated great social unrest."

Going further back, in 2001 a group of professors of economics from the University of London's School of Oriental and African Studies wrote in 'Development Policy in the Twenty-First Century: Beyond the Post-Washington Consensus' that many economists and even the World Bank had found it "among the most disappointing of all structural-adjustment policies". (see the following box) The last known study of India's disinvestment policy was a 2017 working paper, 'Bolder Disinvestment or Better Performance Contracts? Which Way Forward for India's State-Owned Enterprises', from the National Institute of Public Finance and Policy (NIPFP) - a New Delhi-based research institute.

It compared outcomes of disinvestment with that of the 'performance contracts'.

'Performance contract' was a measure of improving performances of CPSEs by entering into a memorandum of understanding (MoU) with the management of CPSEs in which performance was measured by results and objectives instead of by control and procedures. It was tried in pre-1991 liberalisation era and continued in fits and starts until 2015-16.

The NISF is now a dead letter, as the CAG's 2019 report pointed out.

Why CPSEs are important

Shortly after their book 'Indian Income Inequality, 1922-2014: From British Raj to Billionaire Raj?' hit the headlines in India in 2017 - saying among other things that income inequality had shot up dramatically in post-1991 liberalisation period - French economist Lucas Chancel (his co-author was Thomas Piketty) visited New Delhi to address the issues of income inequality and poverty in Asia.

While pointing at the growing inequality in India, he cautioned against the government's disinvestment policy. The reason: Disinvestment stripped government of its assets, thereby reducing its capacity to address income inequality.

But that is not the only worry. There are two more: (a) The Niti Aayog has pointed out that poverty, hunger and income inequality have increased in 22 to 25 of the 28 states and UTs it mapped in 2018 and 2019 and (b) The CAG says that the objectives of disinvestments are not being met.

In such a situation, there is a good case for the central government to revisit its disinvestment policy.