Forget GDP growth rate for the moment. Niti Aayog's SDG Index 2019, released on December 27, 2019, says that more Indians have fallen into poverty, hunger and income inequality in the past two years. This is after a remarkable reduction in poverty between 2005-06 and 2015-16 Nothing could have been more pleasant than this bit of news - reproduced below - from the Global Multidimensional Poverty Index (MPI) 2018 report of the UNDP-Oxford University which was released in September 2018. India's MPI - measuring poverty through multiple deprivations in health, education and living conditions through 10 indicators which involved mapping India's 640 districts in 2015-16 - had gone down substantially, by 271 million, in 10 years between 2005-06 and 2015-16, beating China's performance.

Among other things, the report said India still had 364 million MPI poor of which 156 million (34.6%) are children. "In fact, of all the poor people in India, just over one in four - 27.1% - have not yet celebrated their tenth birthday. The good news is that multidimensional poverty among children under 10 has fallen the fastest. In 2005/6 there were 292 million poor children in India, so the latest figures represent a 47% decrease or 136 million fewer children growing up in multidimensional poverty."

The 2019 Global Multidimensional Poverty India report sticks to 2015-16 data and hence, shows no change in the status.

But the good news of 2018 is unlikely to be repeated in future. Rather, there are strong reasons - official data - to indicate that poverty is going up across the country.

SDG I: Poverty going up in India since 2018: Niti Aayog

In 2018 December, the Niti Aayog released a baseline SDG Index - Baseline Report 2018 - to map India's progress in the 17 SDG Goals set by the UN in 2015. It developed 62 indicators to measure 13 of these 17 SDGs, leaving out SDGs 12 (consumption and production), 13 (climate action), 14 (life below water) and 17 (partnership for the goals) "because relevant state-level data could not be consolidated or found".

Having set the baseline index in 2018, the government's policy think tank measured progress in 2019 - released on December 27, 2019. It is then that India's alarming fall across major indicators like poverty, hunger and income inequality became evident.

In 'SDG Goal 1: No Poverty', the Niti Aayog found India taking a hit - falling from 54 points in 2018 to 50 points in 2019. This index was measured using five national-level indicators: (a) population living below the poverty line (b) household with health cover (c) people getting employment under MGNREGS (d) social protection and (e) those living in 'kuchha' houses.

Poverty increased in 22 states/UTs since 2018

The Niti Aayog data shows, 22 states and UTs taking a hit in 2019 over its 2018 index - indicating that poverty is going up - as presented in the graph below.

The fall ranges from 1 to 18 points. Top big states to fall are: Bihar and Odisha (minus 12 points), Jharkhand (minus 9), Uttar Pradesh and Punjab (minus 8), Assam and West Bengal (minus 5). 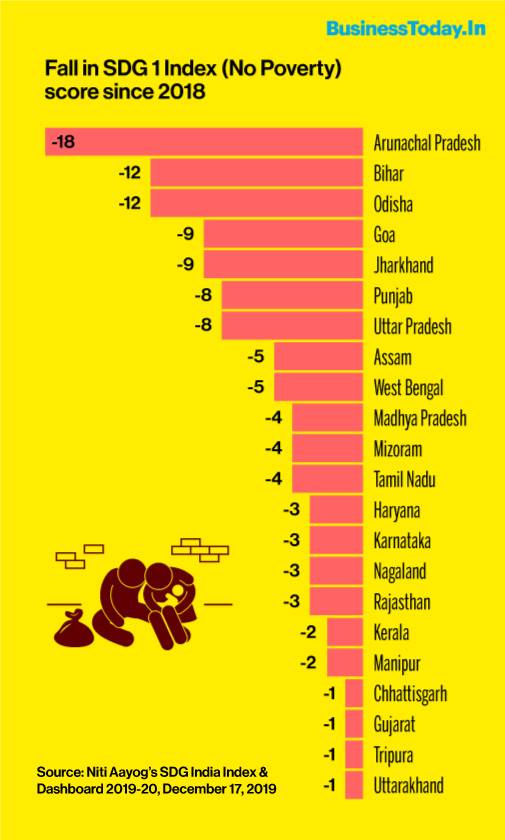 As for the states/UTs, 24 of those saw a decline - as presented in the graph below. Among the big states witnessing a higher fall are: Chhattisgarh (minus 19); Madhya Pradesh, Telangana and Karnataka (minus 17) and Andhra Pradesh (minus 15). 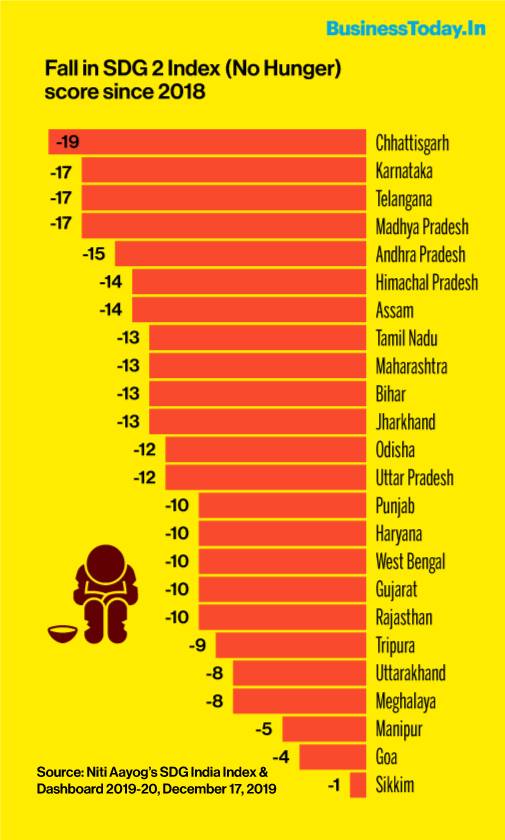 When it comes to the 'SDG Goal 10: Reduced Inequality', the same pattern is repeated.

At the national level the income inequality index fell by 7 points.

When it comes to states/UTs, 25 of those saw a fall in the index. The SDG Goal 10 index captures growth in expenditure, women in panchayats, SC/ST in assemblies, transgenders in labour force and utilisation of funds earmarked for ST/ST sub-plans. Interestingly, when it comes to measuring consumption expenditure - one of the key indicators of SDG 10 - the Niti Aayog uses different standards in 2018 and 2019. While it was the Palma ratio in 2018, it was the Gini Coefficient in 2019. This rejiggle of data makes it impossible to track growth in this area.

That is not surprising since the Government of India junked the 2017-18 consumption expenditure survey by the National Statistical Office (NSO) - Key Indicators: Household Consumer Expenditure in India' - on flimsy grounds after it was leaked and showed that for the first time in more than 40 years 'real' per capita household expenditure in India had fallen.

After this report was junked, a group of 214 economists and other scholars from across the world wrote to the government asking it not to suppress any data that showed its performance in poor light.

Niti Aayog explains nothing, offers nothing for improvement

It being the chief think tank of the Government of India, it is surprising that the Niti Aayog does not explain why there is a fall in such critical indices as poverty, hunger and income inequality in 22 to 25 of 28 states/UTs it tracked in 2018 and 2019.

Its "Conclusion and Way Forward" chapter offers no comment, no insight and is full of generalities the purpose of which is not clear.

Therefore, it is difficult to figure out what exactly is happening and why India is suddenly witnessing rise in poverty and hunger after having registered extraordinary improvement between 2005-06 and 2015-16 - as was revealed by the 2018 UNDP-Oxford report on multidimensional poverty index (MPI).

Poverty and hunger spreading to far more segments of society

The Global Multidimensional Poverty Index 2018 report of the UNDP-Oxford University had pointed out, among other things, that (a) "In 2015/16, the four poorest states - Bihar, Jharkhand, Uttar Pradesh, and Madhya Pradesh - were still home to 196 million MPI poor people - over half of all the MPI poor people in India" and (b) "Traditionally disadvantaged subgroups such as rural dwellers, lower castes and tribes, Muslims and young children are still the poorest in 2015/16".

But going by the Niti Aayog's 2019 SDG India report, it seems poverty, hunger and income inequality have spread far and wide and need urgent attention.

Having released this report just a month ahead of the 2020-21 budget, the Niti Aayog should have recommended specific plans, policies and strategies to address these concerns.

Now that it hasn't, the task for the government, or more specifically the Finance Ministry which would be presenting the budget is well cut out.