The much-anticipated S.S. Rajamouli's movie Baahubali 2: The Conclusion which released worldwide today have garnered endless praise and love not only from the fans but from the entire film industry. 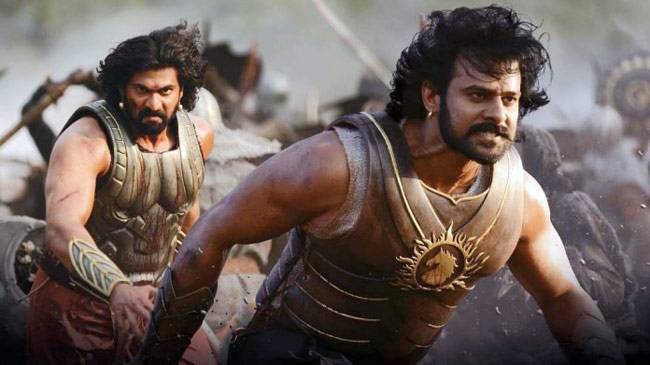 The much-anticipated S.S. Rajamouli's movie Baahubali 2: The Conclusion which released worldwide today have garnered endless praise and love not only from the fans but from the entire film industry. We have all witnessed the crazy obsession surrounding the film since the trailer was released. People have been waiting since last two years to find out the answer to the most infamous question of the year- Why Katappa killed Baahubali ?

Today, people were seen standing in long and endless queues for hours to purchase movie tickets. There have been constant posts on Facebook and tweets from the fans praising the movie. People are amazed and satisfied with the delivery of the movie for which they have waited long. The film got an exceptional reception at the box-office and reportedly after the first day first show the movie got a standing ovation and a huge round of applause.

According to the movie reviews by several media platforms, the film is much more grandeur than its prequel with incredible visual effects, high voltage drama, strong plot and some mind-blowing fighting sequences. It seems that Baahubali 2: The Conclusion is all set to break box-office records set by its own prequel in 2015 where it collected Rs 650 crore. Baahubali 2 can be a game changer for the Indian film industry.

ALSO READ: Bookmyshow, Paytm offer discounts on Baahubali 2 tickets: Here's how you can avail it

Online movie ticketing site BookMyShow today announced that it has sold over 3.3 million tickets so far with 12 tickets every second for one of the most anticipated movies of the year- Baahubali 2: The Conclusion. It surpasses Baahubali 1 by over 350%. Bookmyshow on Thursday said that Baahubali 2 broke the record of Amir Khan Starrer Dangal to become the fastest online pre-booking of tickets. Bookmyshow is offering a discount of up to Rs 125 upon using the promo code BMS125 on the purchase of two tickets, while Paytm users can avail flat Rs 100 cashback on a minimum booking of two tickets on using the promo code BAAHUBALI.

Ashish Saksena, COO-Cinemas, BookMyShow said, "BookMyShow is experiencing an unprecedented advance booking for Baahubali 2. We have already sold over 1 million tickets across languages, even when the bookings have been live for just over a day. Though Baahubali 2 is largely perceived to be loved by South Indian audience, the response from Hindi speaking markets has been highly encouraging as well. Once all the cinemas in South come out with their schedules for the film, we expect the online ticket sales for Baahubali 2 to surge at an increasingly fast pace."

According to reports, the screens that offered advance booking via online sites have sold almost all the tickets for the first three days.

'Baahubali: The Conclusion' has already broke several records and one among them is its collections from the USA in the form of pre-booking. The amount that is collected from the entire US, for the first day of shows stood out to be Rs 19 crore in approx, which is a whopping $ 3 million. The movie is sure going to make it big at international level-both before and after its release. Taran Adarsh, film critic and film trade analyst tweeted-

Reports pouring in from across the country: #Baahubali2 is a GAME CHANGER... Sea of people outside theatres... House Full boards are back!

S.S. Rajamouli proves he's a master storyteller, the Big Boss... #Baahubali2 is sure to vanquish previous BO records and set new ones!

The magnum opus released in about 9,000 screens worldwide. India alone has 6,500 screens, while 1,100 screens have been allotted for the film in the US. The film released in 1,400 screens in other parts of the world.  Today it released in three languages, including Telugu, Tamil and Hindi.  Filmmaker Karan Johar's Dharma Productions is presenting the Hindi version of the film.

The trade analysts have predicted that the movie will outdo its prequel Bahubali - The Beginning and rake in around Rs 1,000 crore at the box-office.  In the last two years, no film was made in India that could challenge the opening day record created by SS Rajamouli's Baahubali: The Beginning.  The movie went on to become the highest grossing Indian film ever by earning an unthinkable sum of over Rs 650 crore.  In 2015, Baahubali 1 released on 4000 screens across the country and reportedly raked in Rs 50 crore on its opening day itself.  According to reports, the opening day worldwide collection of Baahubali 1 was pegged at more than Rs 60 crore.

Baahubali: The Conclusion is believed to have already earned Rs 500 crore via satellite and theatrical rights even before it got released.  The satellite rights of the Hindi version of Bahubali 2 is bought by the Television channel Sony TV for Rs 51 crore, which is the highest amount paid for a dubbed film so far. It is also the highest price the channel has paid for a regional film for television screening.  It seems like Baahubali 2 is all set to open a new chapter in the Indian film industry.

Well just to give you another classic example of India's crazy obsession with the film,  there are these really funny leave applications that people are sending to their bosses and teachers in order to get an off to watch Baahubali 2.

Sorry for asking the leave a day before the Pre-Final Exam!
But it's baahubaLi!#Baahubali2#2DaysForBaahubali2pic.twitter.com/SgkS2iP5jA

Ohk, This is my #Baahubali leave form. pic.twitter.com/MaHuqLlb0c

Many applying for leave on 28th bcz "To find out why #katappa killed #Baahubali". #Bahubali2@ssrajamouli@BaahubaliMovie#Baahubali2Maniapic.twitter.com/j6CI9OIA6R

Baahubali 2: The Conclusion reviews given by the celebs-

Just had the privilege of watching #baahubali2. Right now speechless and not sure what to say. I won't say all the best for the release.....

The whole cast and crew. PRABHAS and RANA for dedicating 5 years of hard work dedication and passion to a film n turning it in to #Bahubali

#Baahubali2 is Indian Cinema's finest canvas. @ssrajamouli has taken not just Telugu Cinema, but Indian Cinema to a whole new level.Hats off

More than "Why Kattappa Killed Baahubali", we should ask "How did @ssrajamouli make #Baahubali2 "? Outstanding film that makes us proud

Baahubali 2: The Conclusion reviews given by the fans-

Prabhas is at the very top of his game in #Baahubali2 ... What a frame, what a deep baritone! Saaho Baahubali Saaho

#Baahubali2: Overall, a terrific team effort that'll be remembered for centuries. Without second thoughts, go watch this epic finale. Worth.

Still couldn't believe what I just saw @ssrajamouli Devudu Sami nuvvu. #Prabhas in this movie is outstanding.Loved it.#Baahubali2,take a bow

#Baahubali2: Prabhas has lived in the role of Baahubali. A brilliant act. Rana is terrific. Anushka and Nasser also score big points.

Buying gold this Akshaya Tritiya? Check out these options

RERA comes into effect: Here's what it means for homebuyers