News
CORONAVIRUS
Omicron variant: How deadly is the South African Covid-19 strain; will existing vaccines work? All you need to know

Omicron variant: How deadly is the South African Covid-19 strain; will existing vaccines work? All you need to know

The Deutsche Bank report says even if Omicron does prove to be "less deadly", this could still be outweighed by a rise in "transmissibility", resulting in more overall "hospitalisations" and "deaths".

The WHO says the first documented case of this Covid-19 variant was first detected on November 9, which means the virus may be spreading for the past three weeks. Photo: Reuters

The World Health Organisation (WHO) on November 26, 2021, designated the new Covid-19 variant B.1.1.529 named Omicron, a "variant of concern", on the advice of WHO's Technical Advisory Group on Virus Evolution (TAG-VE). The development comes after the number of people testing positive has risen in areas of South Africa by this variant. However, research is underway to understand if it's because of the 'Omicron' variant or some other factors. The WHO has said its decision to designate the virus as a "variant of concern" is based on the evidence presented to the TAG-VE (technical advisory group on virus evolution). Experts have said that Omicron has several mutations that may have an impact on how it behaves. For example, on how easily it spreads or the severity of illness it causes.

Here is everything you need to know about the Omicron Covid-19 variant: 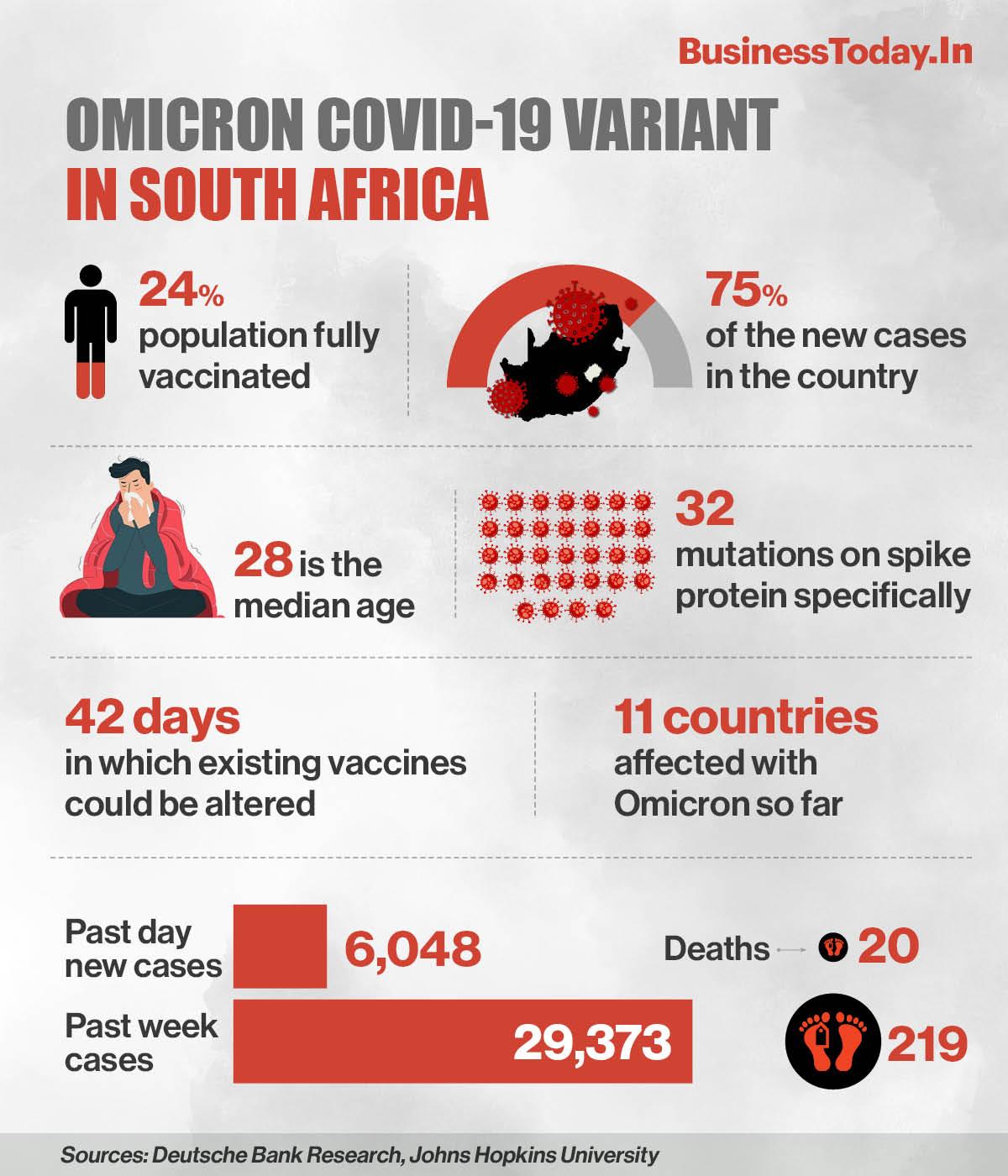 How prevalent is the Omicron variant?

As per the Deutsche Bank Research report, the Omicron variant, or B.1.1.529, has become the dominant strain in South Africa, with genome sequencing indicating that 75 per cent of the new cases in the country are from this variant. In Gauteng province, the figure stands at 90 per cent. The WHO has said the first documented case of this Covid-19 variant was first detected on November 9, which means the virus may be spreading for the past three weeks.

How contagious is Omicron?

The Deutsche Bank report says the South African Covid-19 variant could be more contagious than other variants. The reason for the widespread concern is the incredibly high number of mutations, with 32 on the spike protein specifically, which is the part of the virus that allows it to enter human cells. "That's much more than we've seen for previous variants, and raises the prospect it could be a more transmissible version of the virus, although scientists are still assessing this," the report adds.

Also Read: Amid threat of new COVID-19 variant, Centre lists measures to be followed by states

Should people be concerned?

Though the WHO experts are still studying this new virus it's in the early stages, experts think there are some worrying signs. The WHO has said initial signs show the Omicron could cause "reinfection". Also, this variant has a lot more mutations than other variants had, particularly on the spike protein. "This could make this variant more infectious, and there is also the possibility that vaccines are less effective against it too," says the Deutsche Bank report.

The EU's European Centre for Disease Prevention and Control has gone as far as saying that "partial immune escape is likely" based on Omnicron's mutation profile. The variant has become the dominant variant in South Africa "remarkably quickly", around two weeks, says the Deutsche Bank report, which is even quicker than the highly contagious Delta variant.

Is Omicron a deadly variant?

Experts are still finding out how deadly this virus is but the Deutsche Bank report says even if it does prove to be "less deadly", this could still be outweighed by a rise in "transmissibility", resulting in more overall hospitalisations and deaths.

"Take an example where 100 people have a virus and it sends 10% into hospital. That means 10 end up in hospital. Then let's say the virus mutates, and it then only has an 8 per cent chance of sending you to hospital but is 40 per cent more infectious. Then 140 people have the virus, but 11 end up in the hospital, which was actually more than under the previous strain, even though the hospitalisation rate for each case is actually lower," the report adds.

How many countries have reported Omicron cases?

So far, the main cluster of this Covid strain is in South Africa, although that doesn't necessarily mean it originated there. Bostwana has so far identified 19 cases of this virus. The Netherlands reported 13 cases of this variant from two flights that arrived in the country. Hong Kong had found two cases of this variant; Belgium confirmed that they had a case; and Israel's health ministry also confirmed a case. Similarly, the UK found 2, Italy one; Australia two; Germany three; and Denmark two confirmed cases of Omicron Covid-19 variant.

What could happen in near future?

As per the Deutsche Bank report, A strong leading indicator will be what happens to hospitalisations and deaths in South Africa, where this has become dominant. If there is a noticeable spike, then that carries concerning implications for elsewhere.

However, much higher vaccination in Europe and the US, which could offer protection against the virus spread. Notably, only 24 per cent of the South African population is fully vaccinated, while the percentage is 58 per cent in the United States and 69 per cent in France. However, another concerning factor is the older population across Europe and the US, which may result in higher hospitalisations and deaths.  In South Africa, the median age in the country is 28, much lower than Western Europe's median age of 44, says the Deutsche Bank report.

What are the overall implications on stock markets?

Reports of the spread of a new COVID-19 variant of concern in Southern Africa have caused sharp negative moves in stock markets. "Market concern is understandable, in our view. Early evidence suggests a very rapid displacement of the delta variant, which is known to be dominant in South Africa," says a report by financial services major Credit Suisse.

When looking at the emergence of the delta wave, the key indicator was how quickly delta increased in its share of sequenced cases. Sequencing data suggests B.1.1.529 has a different evolutionary pathway but shares a few common mutations with the C.1.2, Beta and Delta variants, the report adds.

There's no clarity on whether existing vaccines will work against Omicron or not, but laboratory testing is already underway according to the South Africa National Institute for Communicable Diseases. Initial thoughts from the institute are that "partial immune escape is likely", considering numerous mutations in comparison to the sequence that existing vaccines were designed against. Experts say it could take a minimum of 6-week time to develop a new vaccine against this variant. But, the riders like conducting trials could add months.

Are there any positive signs?

On the more optimistic side, there are some very initial indications that symptoms in cases have been "mild" or "mild-to-moderate". Barry Schoub, who is the chairman of the Ministerial Advisory Committee on Vaccines in South Africa, said on Sky News on Sunday that "The cases that have occurred so far have all been mild cases, mild-to-moderate cases, and that's a good sign".

Furthermore, other Covid variants previously discovered did not become an issue globally. For instance, the gamma variant that was first discovered in Brazil was a major issue there, but unlike Delta never became globally dominant, and most regions were relatively unaffected.