Cryptocurrencies are playing an instrumental role when it comes to the Russia-Ukraine crisis. Ukraine has raised over $35 million worth of cryptocurrencies till date.

Tuesday was the most successful day by far when it came to crypto fundraising for Ukraine.

Crypto donations to Ukraine have surged in the past few days. This is the first time cryptocurrencies have been used by a country to fund its war efforts.

Tuesday was the most successful day by far when it came to crypto fundraising for Ukraine. The country raised $10.7 million worth of cryptocurrencies in a single day. Total funds raised via crypto have crossed the $35 million-mark. 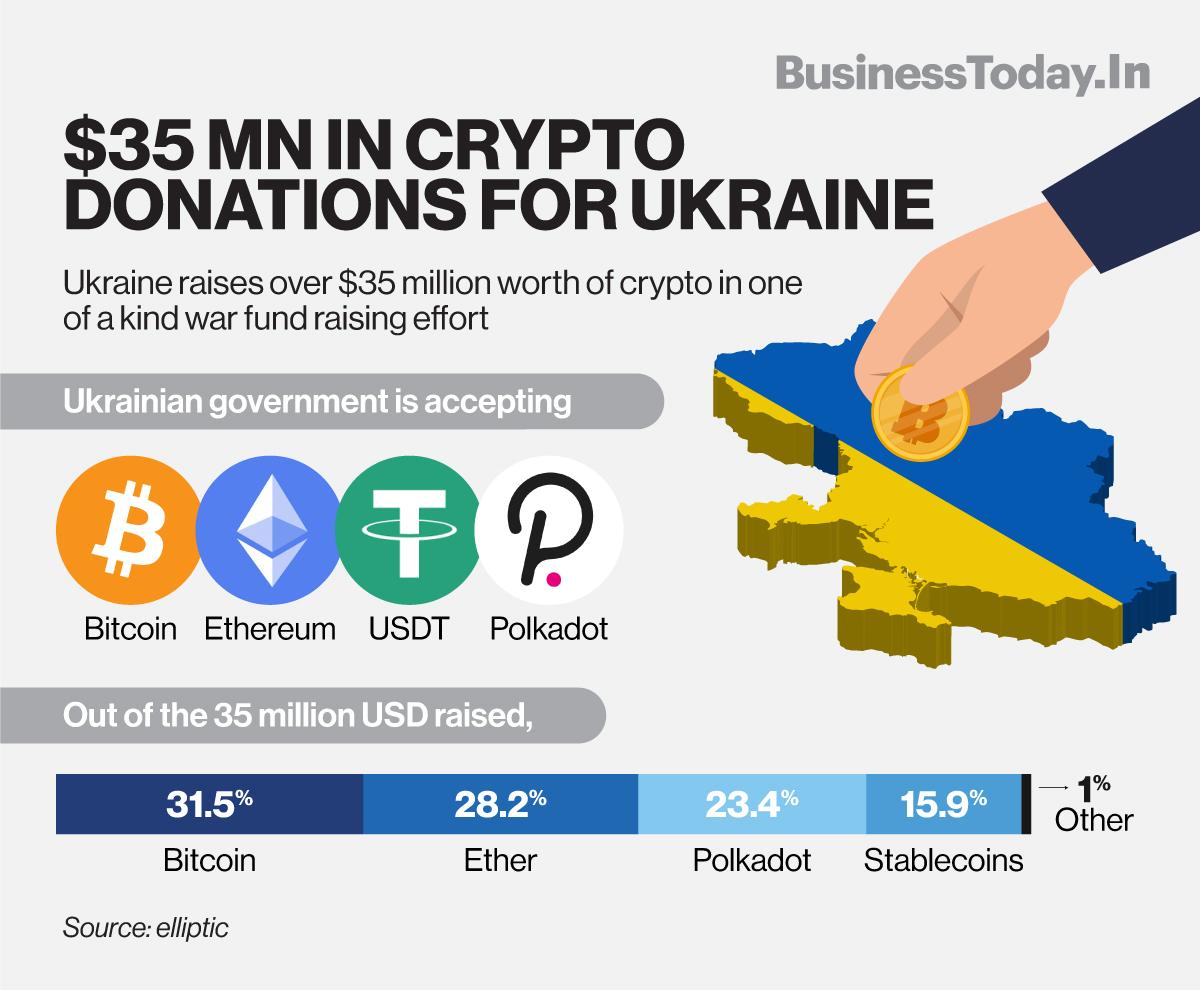 Crypto donations are being sent to the government, as well as to non- governmental organizations like Come Back Alive. A Decentralised Autonomous Organisation, also called UkraineDAO, was also set up last week to raise funds for the war-torn nation.

Get a Bitcoin cryptocurrency address. So it will be accepted globally.

In a tweet Saturday, the Ukrainian government announced that they would be accepting cryptocurrencies. The tweet contained wallet addresses for Bitcoin, Ethereum and USDT.


On Monday, the country announced that they had set up a wallet address to accept Polkadot as well.

The people of Ukraine are grateful for the support and donations from the global crypto community as we protect our freedom. We are now accepting Polkadot donations too: $DOT: 1x8aa2N2Ar9SQweJv9vsuZn3WYDHu7gMQu1RePjZuBe33Hv.
More cryptocurrencies to be accepted soon.

The NGO, Come Back Alive was raising crypto donations to support the Ukrainian armed forces against the Russian invasion. They had raised over $570,000 worth of cryptocurrencies in the year 2021. The NGO was banned by Patreon on Friday on grounds of war funding.

A decentralised autonomous organization, UkraineDAO was set up by Russian artists and crypto enthusiasts. The DAO minted an NFT of the Ukrainian flag which was auctioned to raise funds for the Ukrainian army.

Furthermore, Ukraine has guaranteed it will give Russian soldiers, who lay down their arms, $45,000 in cryptocurrency. Anonymous, a hacking collective, made a similar offer, offering the same sum to soldiers surrendering with their tanks.

Also Read: Russia-Ukraine war can lead to a new round of shortages, price hikes

Also Read: Russia-Ukraine war: What's on Putin's mind and what will he do next?