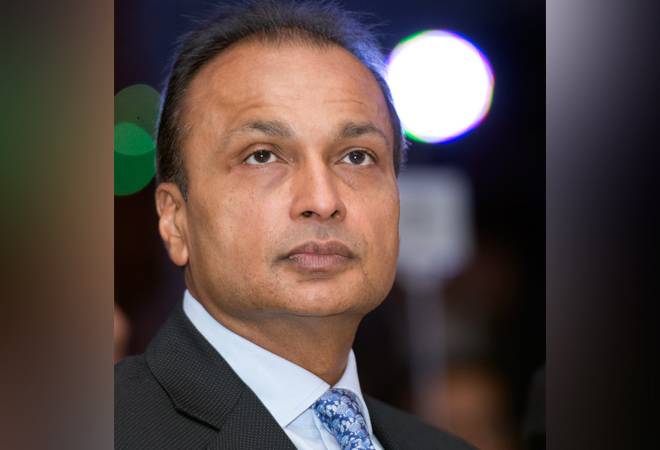 Once the sixth richest man in the world, Anil Ambani is no longer part of the billionaire club.

Anil Ambani, who was the 6th richest man in the world with a wealth of $42 billion in 2008, has now crashed out of the billionaire club. In 11 years, the equity value of Ambani's entire business empire has now crashed to Rs 3,651 crore ($523 million). That value, though, also includes substantial pledged shares.

The value of his un-encumbered equity on June 11, excluding invoked and pledged shares, is even lower at Rs 765 crore ($109 million)-barely 2 times the $50 million tag of the Bombardier Global Express jet he flies.

Ambani's shrunk empire 'The Reliance Group' was valued at over Rs 8,000 crore just four months back, before lenders invoked shares in his firms multiple times due to payment defaults. The drastic fall in value is on account of the sale of 42.88 per cent stake in mutual fund joint venture-- Reliance Nippon Life Asset Management (RNLAM). The other reasons for the value erosion include the higher level of pledging of promoter's stake in group companies and their invocation by lenders or falling market values.

In March 2018, the Reliance Group companies had a total debt of over Rs 1.7 lakh crore. It would have drastically reduced after the sale of major assets and businesses. But in the process, Anil Ambani has lost a lot of his empire. Last week, he claimed that over Rs 35,000 crore of loans--- principal of Rs 24,800 crore and interest payments of Rs 10,600 crore --- have been paid back in the last 14 months and all future payment obligations will be met in a timely manner. 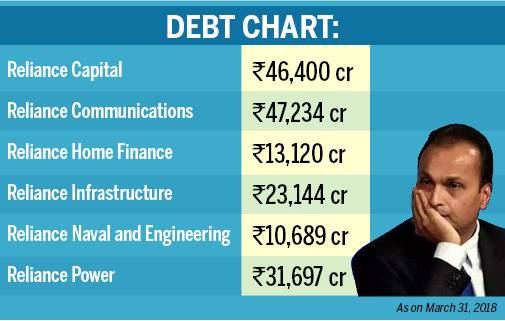 The biggest asset in younger Ambani's business empire was RNLAM, valued around Rs 13,500 crore in the stock market. "Nippon Life and other few financial investors bought RCap's stake in RNLAM," said people in the know. The entire stake sale has realised Rs 6,000 crore which will be used to pare down RCap's debt of Rs 46,400 crore (March 2018).

A banker with an American bank, who sought anonymity, said that the entire business empire of Anil Ambani is less than the value of his elder brother Mukesh Ambani's home Antilla, which was rumoured to be built at a cost of around $2 billion.

"Mukesh Ambani earned a dividend of Rs 14,500 crore from Reliance Industries in 2017-18. On the other hand, Anil has been desperately selling assets one by one to reduce his debt. He sold off major assets like power distribution, Big FM and now mutual fund," he said.

Last week, Price Waterhouse & Co Chartered Accountants LLP (PwC) resigned as one of the statutory auditors of RCap and RHome-- the companies which were earlier downgraded by three rating agencies. RCap shares fell seven per cent in early trade on last Wednesday because of the exit of auditors.

PwC stated in a letter dated April 24 that Reliance Capital disputed the observations highlighted by it and did not convene an audit committee meeting within the expected time. The company also stated that it might initiate appropriate legal proceedings against the firm, as per PwC. "The company has duly responded to the various queries and letters of PWC and has also duly and validly convened a meeting of the audit committee on June 12, 2019 to further respond to the letter dated May 14, 2019, from PWC," Reliance Capital said.

An analyst said that the debt still appears unmanageable. "They don't need to bother about RCom and the naval business as both are before the bankruptcy court. But the plan for power, infrastructure and financing business should be clear," he added.

After the mutual fund business, the group is now looking to sell general insurance unit. Ambani's efforts to sell telecom business to Reliance Jio of Mukesh Ambani had failed to materialise last year because of regulatory hurdles. RCom later filed for bankruptcy.

Ambani has repeatedly stated that he has vowed to cut group debt to "bare" minimum. In a media conference call, he blamed "unwarranted rumour-mongering" for the sharp fall in shares of his group firms, RPower and RInfra. A couple of months back, Ambani just escaped from going to jail after his elder brother paid off an overdue liability towards Ericsson.

Three rating agencies CARE, ICRA and Brickwork had recently downgraded the borrowings of RCap and its subsidiaries. CARE lowered the rating of some of RCap's debt instruments to 'D', which means the debt facility is either in default or is expected to be so soon.