Mesh is the result of years of Microsoft research and development in areas ranging from hand and eye tracking and HoloLens development to creating persistent holograms and artificial intelligence models. 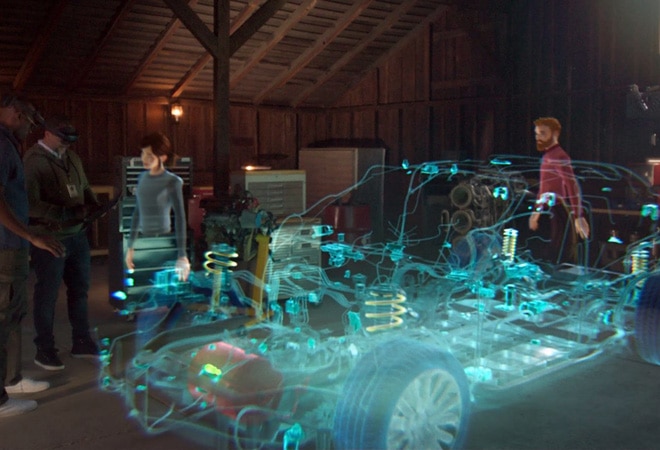 Microsoft on Tuesday showcased its mixed-reality platform Mesh, which allows people in different physical locations to join collaborative and shared holographic experiences on many kinds of devices, during its Ignite digital conference.

"This has been the dream for mixed reality, the idea from the very beginning. You can actually feel like you're in the same place with someone sharing content or you can teleport from different mixed reality devices and be present with people even when you're not physically together," Microsoft Technical Fellow Alex Kipman said.

Kipman appeared on the Ignite virtual stage as a fully realized holoportation of himself, narrating the show's opening experience in real-time as rays of light that simulated his physical body.

"People will initially be able to express themselves as avatars in these shared virtual experiences and over time use holoportation to project themselves as their most lifelike, photorealistic selves," Microsoft said.

Introducing Microsoft Mesh, which enables people to interact holographically with others, with true presence and in a natural way. I can't wait to see the world we create together with this new platform. https://t.co/WsUuOlzruB

Mesh is the result of years of Microsoft research and development in areas ranging from hand and eye tracking and HoloLens development to creating persistent holograms and artificial intelligence models that can create expressive avatars, the company said.

Microsoft announced two apps built on the Microsoft Mesh platform during the conference. Over time, it expects that customers will be able to choose from a growing set of Microsoft Mesh-enabled applications built by external developers and partners, and also to benefit from planned integration with Microsoft products such as Microsoft Teams and Dynamics 365.

Also read: The New Windows, new version from Microsoft may launch next month

Accenture to cover cost of COVID-19 vaccine of its employees