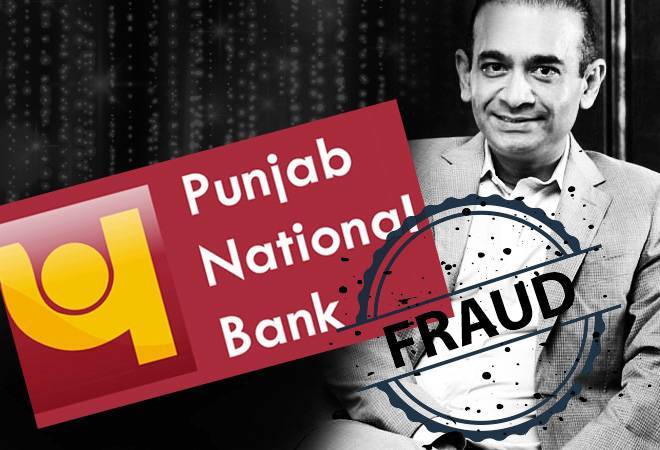 In the 14,000-page prosecution complaint filed before the special PMLA court in Mumbai in Rs 6,498-crore fraud case against Nirav Modi, the ED said he was the prime conspirator behind the entire PNB fraud. The chargesheet also reveals his brother Nehal Modi destroyed evidence like cellphones of their companies' dummy directors in Dubai and Hong Kong, and tried to hide 50kg gold.

IndiaToday.In has exclusively reviewed the Enforcement Directorate chargesheet filed against 24 accused in the Punjab National Bank fraud case. The major charges against Nirav Modi are mentioned below.

After the Central Bureau of Investigation (CBI) registering a criminal case against Nirav Modi and others in February 2018, Nehal Modi, brother of Nirav, not only made efforts to destroy the evidence but also tried to hide 50kg gold. Nehal Modi intentionally helped in concealing money laundering and destroying the evidence. "He dealt with proceeds of crime by taking 50 kg gold from Firestar Diamond FZE, Dubai - after the initiation of investigation in this fraud," the chargesheet said.

In a statement recorded by the ED, Divyeshkumar Gandhi, Director, Auragem Company Ltd stated, "After the crisis, Nehal Modi destroyed all the cellphones of all dummy directors in Dubai and Hong Kong and arranged for their tickets to Cairo, a safe haven".

Satyendra Shukla, General Manager (factory), Firestar Diamond FZE, in his statement to agency said, "During February-March 2018, 50kg (29kg plus 21kg) gold was taken away by Nehal Modi and Mihir Bhansali from Firestar Diamond and Jewellery FZCO." To prove his point, Shukla submitted the CCTV footage to the ED showing Nehal Modi giving instructions about delivery of gold.

"After initiation of investigation, all persons with dummy directors wished to return to India, but were persuaded by Mohir Bhansali and lawyers to stay back," Shukla stated to the ED.

Serious charges were pressed against Deepak Modi, father of Nirav, for being a beneficiary of Link High International and Twin Square companies, in which the funds of around $50-55 million were transferred from Nirav Modi group dummy companies. "He intentionally participated in assisting the activity of money laundering to project it as untainted property, concealment of money, and money laundering, and destroying the evidence," the chargesheet stated.

Sister Purvi Mehta also played a crucial role in money laundering and layering of the money, thus becoming the beneficiary of these proceeds of crime. Purvi is also owner/director of the company Fine Classic FZE and Lily Mountain Investment, in which huge sums were diverted from Nirav Modi Dubai-based group companies.

Maiank Mehta, brother-in-law of Nirav Modi, was also involved in the fund diversion. In fact, he was more than happy to gift $30 million (bank's fund) to his wife Purvi Mehta, sister of Nirav Modi.

"Purvi used the gift amount to create a FCNR deposit in Syndicate Bank, Mumbai. Later, she took a loan from Syndicate Bank, London Branch by putting the said FCNR deposit as a security. The proceeds of the loan were transferred to Ratnakar Bank and four deposits were created. On the basis of those four deposits, a loan was taken by Radashir Jewellery Pvt Ltd (Nirav Modi Company) in terms of packing credit. The funds were utilized by Radashir Jewellery indirectly for about two years. Finally, in 2015-16, the loan was closed and the funds were re-remitted to Purvi Modi's account in Syndicate Bank, London & Barclays Bank, Singapore," the chargesheet revealed.

Neeshal Modi participated in appointing dummy partners and was signatory/beneficiaries through "complex BVI structures, in some of Dubai based dummy companies during 2011-2013". He was also the director of Firestar Diamond based in Belgium, in which "huge sums were transferred from Hong Kong based companies".

It is interesting to know all the dummy directors were connected to common secret software for the internal communication. The complaint stated, "Communication regarding functioning of these dummy companies was done on 'panemail' only between Kurian Mathews, Saju Poulose, Aditya Nanawati, Nirav Modi, Mihir Bhansali, Shyam Wadhwa and Shukla, etc." All dummy directors/owners/managers were having their accounts on panemail. Later on, this system was closed and migrated to new email system called "cricket".

In last four months of investigation, the ED team managed to trail nearly $629.21 million (Rs 4,000 crore) of laundered money in Rs 6,498 crore PNB fraud case against Nirav Modi and others. Further investigation regarding the trail of remaining funds and its end use is in progress, the chargesheet stated.

In the chargesheet, the agency tried to explain Modi's modus operandi in details (using charts etc). To begin with, Modi's three accused firms Stellar Diamond, Solar Exports and Diamond R US maintained its accounts in Axis Bank (Andheri Branch) and PNB (Brady House branch). The fraudulent amount of Rs 6,498 crore was diverted outside India from Dubai and Hong Kong-based companies.

All these goods were moved between the Firestar Group companies and the dummy companies in countries namely; Hong Kong, Dubai and India. This would create huge outstanding in the books of accounts of dummy companies against the Indian Companies. The fraudulent funds were then layered against the payments of the dummy exports/imports.

In these companies, the funds were rotated in a way similar to Hong Kong transactions. It was found that net of USD 436 million has also been transferred to Dubai in guise of export and import payments. 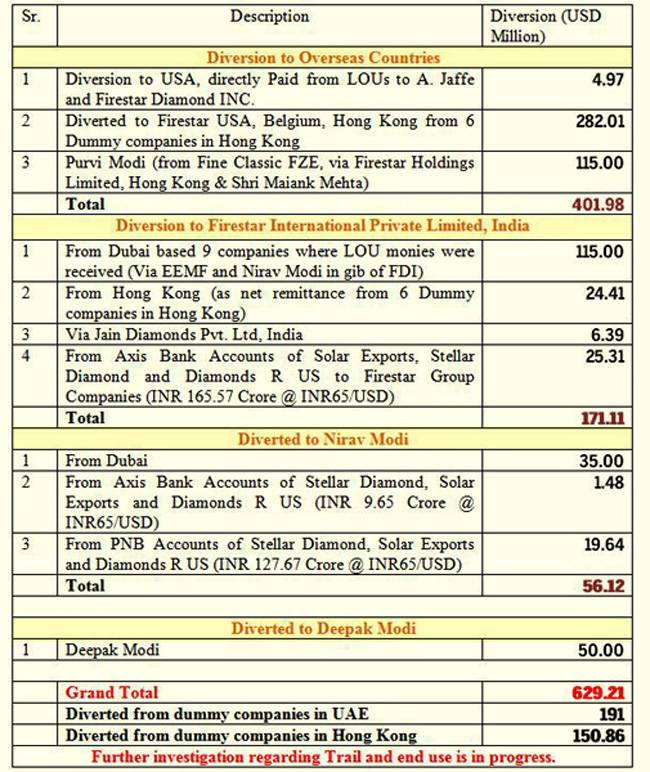 Fund diversions or round tripping by Purvi Mehta

During the investigations, it was found that six dummy companies in Dubai transferred $50 million to a British Virgin Island (BVI) company called Lili Mountain Investments Company, whose director is Purvi Mehta. From there, the funds were directly paid to one Enterprise Emerging Market Funds (EEMF), located in BVI. EEMF is a fiduciary fund which acts as per instructions of investors.

From EEMF, the funds were transferred into two companies, Forecom Worldwide Investment ($30million) and Jade Bridge Holdings Ltd ($20 million). The same amount was then used to invest in Firestar International Private Limited (FIPL) back in India via Foreign Direct Investment (FDI) route. "Thus, the amount was diverted to FIPL from Hong Kong after layering of funds through various overseas dummy companies," an ED official said.

The complaint said, "In the respective years, no other transactions reflect in these middle companies i.e. Jade Bridge Holdings, Forecom Worldwide Investment, Lili Mountain Investment Company, emphasising the fact that the companies were used only to layer the funds and to obfuscate the real source which is the Fraudulent LOUs issued from the PNB."

In the second transaction under Purvi's name, it was revealed that Fine Classic FZE, a Dubai Based company owned/controlled by Purvi, had purchased diamonds from dummy Dubai companies of Nirav Modi and had not paid the amount for the purchase.

In the third transaction, Purvi transferred $20 million to Firestar Holdings Ltd, Hong Kong. Also, Purvi had given a loan of $15 million to A Jaffe, USA, and Synergy Corporation, USA. Both these US companies were purchased by Firestar Holdings Ltd, HK and the loan of $15 million was clubbed and the total outstanding in favour of Purvi Modi became $35 million. Subsequently, the amount was paid to Purvi Modi in 2017. In this regard, to explain these transactions, the ED had summoned Purvi Mehta thrice, but she refused to join the investigation.

"In fact, gold were melted by Hong Kong-based refinery companies to get it re-exported back to India and Dubai. All companies managed by Nirav Modi were involved in circular transactions with the help of Dubai/Hong Kong based dummy companies," the chargesheet said, revealing there were no manufacturing activities in any of the Modi companies.