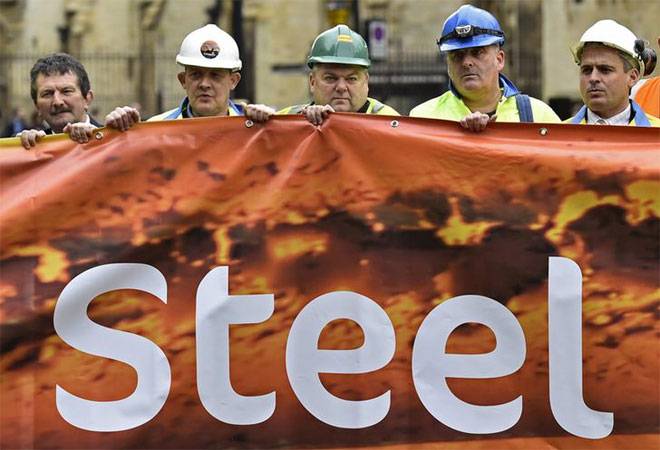 Tatas will launch the sale process by Monday for its cash-guzzling steel business in the UK with the British government on Wednesday promising to help find a serious buyer in its bid to secure jobs of thousands of workers at plants there.

Facing intense pressure from labour unions and opposition parties, the British government air-dashed its Business Minister Sajid Javid to Mumbai this morning for a marathon meeting with Tata Group Chairman chief Cyrus Mistry and other top officials to discuss contours of the sale process.

While Tata officials kept mum about the issues discussed with the British Minister, Javid said after meeting that Tata Steel will launch the formal sale process by Monday, April 11 and the UK Government was committed to do its part to help find a "serious buyer".

He also said that no timeframe was yet decided to complete the sale process and Tatas will allow "a reasonable period to find a buyer".

"British govt is determined to secure a long-term viable future for UK steel sector and its workers," said Javid, who also tweeted to term his meeting as "constructive and positive".

During his meetings with officials of Tata Group, which has put its steel operations in UK on the block after grappling with huge losses and severe cash burn, Javid is understood to have discussed broader contours of the sale process and is said to have pressed upon Tatas to ensure that there were no job losses.

While a large posse of reporters including from the British media had assembled outside Bombay House since morning, a Tata Steel spokesman said he has nothing to share with the media.

Tata Steel UK employs around 15,000 people and the British Government is keen to save these jobs in an already bad economic environment, especially for the steel industry which once was among the most prominent ones in the country.

The meeting comes within a week of the Tatas putting up for sale the British operations of Tata Steel, which it had acquired as Corus in April 2007 at the peak of commodity price hike cycle for over USD 12 billion but has since then never been able to turn around.

A Tata Steel spokesperson later said, "Today's meeting is the follow-up of what we have announced on March 29."

Tata Steel Europe had announced plans to sell its UK steel business that day after a "strategic review" by its board, throwing the industry into chaos. The company, since the acquisition, has sunk over 3 billion pounds into the UK plants that have been hit by Chinese dumping and a massive 30 per cent drop in demand since the 2008 global credit crisis.

"Tatas have demonstrated once again that they are a responsible group. They will start formal sales process on Monday. They have not set any deadline for the sales process to be over. The UK Government will do everything it can to support any serious buyer in every way we can to secure the long-term future of this industry," Javid said.

He said a number of parties, including Liberty Steel, have come forward, but did not share further details.

He added that he expected other interested parties to come forward once the formal sale process had begun.

Before coming to India, Javid held meetings in London with various trade unions, who asked him to ensure that Tatas make all out efforts to find a buyer for its plants.

In London he also had crucial talks with Indian-origin businessman Sanjeev Gupta of Liberty Group, who has expressed an interest in acquiring Tata Steel's embattled Port Talbot plant in South Wales. The plant alone employs over 4,000 and is the biggest steel unit in the British isles.

Gupta had said he was waiting for the Tatas to start the "sales process" and promised there will not be any major job cuts. Gupta's firm is conducting due diligence of the Tata Steel operations and has held talks with the Tata Group over the prospect of acquiring the unit and saving thousands of jobs.

"If we get involved in Port Talbot, we will only do so on the basis that we are confident there will not be any mass redundancies," Gupta said.

British Prime Minister David Cameron has got personally involved in trying to work out a solution to the crisis triggered as a result of cheap imports from China, falling global demand, high energy prices and a tougher tax regime than many rival nations. But his government is not ready to impose higher tariffs on Chinese steel.