For a variety of reasons, around 30 per cent of agricultural households still find it easier to avail credit from non-institutional sources, despite significantly higher rates It also included Rs 30,000 crore Additional Emergency Working Capital Funding for farmers through NABARD for post-harvest (Rabi) and current Kharif crop requirements in May and June. This is over and above Rs 90,000 crore to be provided by NABARD through the normal refinance route during this year. It is expected to benefit around 3 crore farmers - mostly small and marginal ones who have inadequate financial resources. NABARD will extend this additional refinance support of Rs 30,000 crore for crop loan requirement of Rural Cooperative Banks and Regional Rural Banks (RRBs) which are the main source of credit. "Due to the COVID-19 crisis, NABARD might face difficulty in raising money from the market. So, on April 17, RBI has given a line of credit support to NABARD of Rs 25,000 crore at repo rate to refinance during this Kharif season. We expect RBI might give another Rs 30,000 crore liquidity support to NABARD to ease the stress and cost of borrowing," said a SBI's Ecowrap report.

Now this announcement covers two aspects - one the rabi harvest and second, the beneficiaries (mostly small and marginal farmers) who are expected to avail this additional emergency fund.

Encouraged by high water levels in reservoirs and increased moisture content in soil due to delayed withdrawal of the southwest monsoon, farmers had increased the area under various rabi crops quite sharply. The acreage under rabi crops increased to 66 million hectares during the 2019/20 rabi season against the usual acreage of 62-64 million hectares. But as the saying goes 'Man proposes, God disposes'. Unseasonal rains in the last week of March had damaged part of the standing crop. On top of this, coronavirus lockdown was announced in the middle of harvesting and procurement season, impacting procurement activity. The CMIE has estimated 147.2 million tonnes of rabi food grain production during 2019/20, which is 2.3 per cent higher than 143.9 million tonnes that was produced during the previous rabi season. However, it is lower than the advance estimate of 149.6 million tonnes for 2019/20 released by the Ministry of Agriculture and Farmers' Welfare in February 2020. 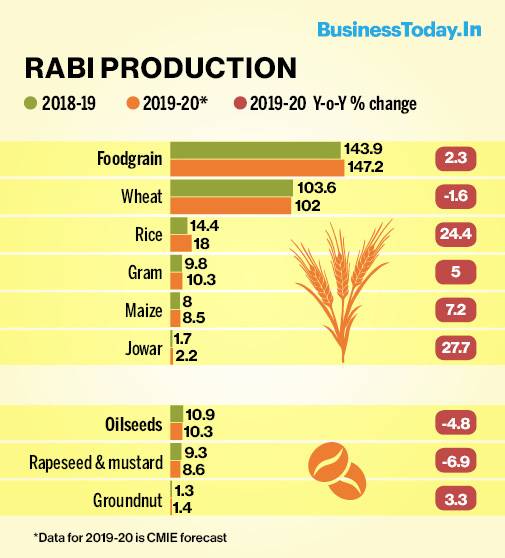 And now the beneficiaries: around 3 crore farmers, mostly small and marginal. The total number of small and marginal farmers in the country, as per Agriculture Census, 2015-16, was 12.6 crore, but this extra funding fails to cover even one-fourth of them. It's hard to ignore their dominance either, as these small and marginal holdings (0.00-2.00 hectare) cumulatively constitute 86.1 per cent of the total holdings in 2015-16 while their share in the operated area stood at 46.9 per cent. Moreover, banks share in outstanding loans of agricultural households is close to 43 per cent. As per the Situation Assessment Survey of Agricultural Households (NSS 70th Round), the share of institutional loans increases with increase in land possessed. For the agricultural households covered in the lowest size class of land possessed (less than 0.01 hectares), only about 15 per cent of the outstanding loans were from institutional sources (government, co-operative society, bank). The share was about 79 per cent for the households belonging to the highest size class of land possessed (more than 10 hectares). Approximately, 30 per cent of agricultural households still avail credit from non-institutional sources. RBI's Internal Working Group to review agricultural credit report pointed out that the probable reasons could be that their credit demand might be for consumption purposes or they could be tenant farmers, sharecroppers and landless labourers who are not able to offer collateral security to avail institutional credit, or they are involved in unviable subsistence agriculture, or banks don't find them credit worthy. As a result, these farmers find it convenient to borrow money from non-institutional sources due to easy accessibility.

Cyclone Amphan to intensify by May 16; IMD expects rain in Andamans, Odisha, Bengal in next 2 days