Seelampur protests: The police who were outnumbered by the protestors in the violent clashes were lobbed with tear gas shells. The policemen reportedly also fired at the crowd 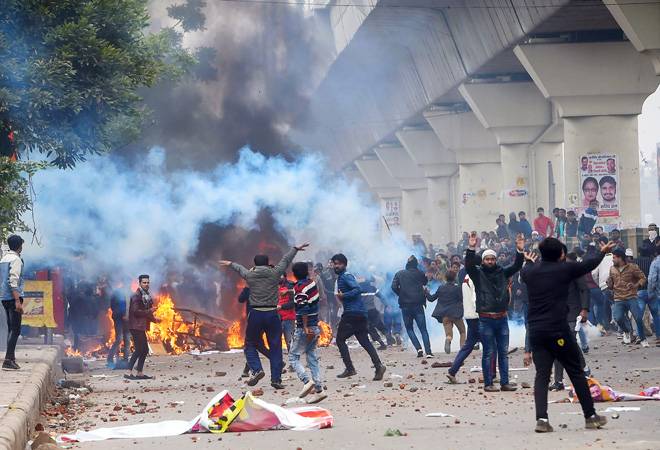 A day after Delhi witnessed violent clashes between Jamia students and the Delhi Police, a similar scene has taken place in the city's Seelampur area. Protestors reportedly pelted policemen with stones.

The police who were outnumbered by the protestors were lobbed with tear gas shells. The policemen reportedly also fired at the crowd.

According to reports, two policemen have been injured in the violence. Two buses have been vandalised.

Delhi: Police use tear gas shells to disperse the protesters after a clash broke out between police and protesters in Jafrabad area, during protest against #CitizenshipAmendmentAct. Protesters also pelted stones during the protest. Two buses have been vandalised. pic.twitter.com/pbxBiARo3Q

As per initial reports the protests against the Citizenship Amendment Act started around 12 pm. People from Seelampur area gathered at a crossing to demonstrate against the act. As per reports, the protestors shouted slogans against the National Register of Citizens (NRC) and the government.

As many as five metro stations including Seelampur on the Red Line and Welcome, Jaffrabad, Maujpur-Babarpur on the Pink Line have been closed by the DMRC following the violent clashes.

The Delhi Police uses a drone to monitor the situation in Jaffrabad area after the clash broke out between police and protesters, during the demonstration against Citizenship Amendment Act today.

Delhi has been tense since the violent clashes between Jamia Milia Islamia University students and Delhi Police on Sunday.