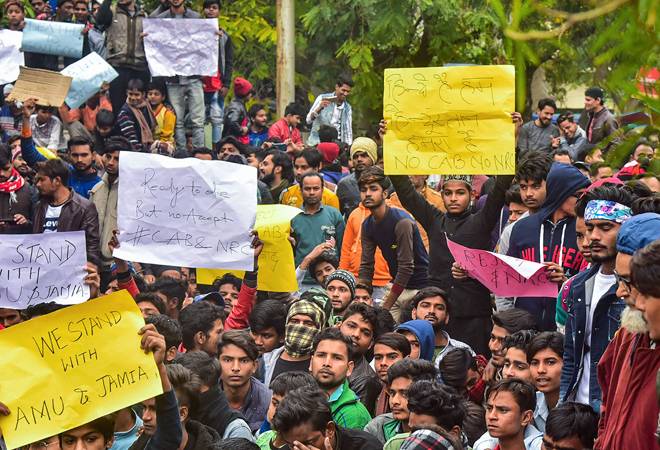 Two persons were killed in police firing at Mangaluru in BJP-ruled Karnataka on Thursday as protests against the Citizenship Amendment Act turned violent, even as street demonstrations surged in southern cities. Police have clamped curfew in parts of Mangaluru until Friday night.

Two persons received bullet injuries in police firing and they later succumbed at a hospital, police confirmed. The deceased were identified as Jaleel Kudroli (49) and Nausheen (23).

Prominent citizens hit the streets in Bengaluru and Chennai alongside students, activists and the general public to oppose the contentious law.

In Karnataka, police lobbed tear gas shells, resorted to baton charge and fired in the air to disperse protesters in Mangaluru, as thousands of demonstrators hit the streets in many cities and towns across the state, defying prohibitory orders.

Historian Ramachandra Guha, who attempted to stage protest at the Town Hall area in Bengaluru, was removed from the spot and let off later. Guha said it was "absolutely undemocratic" that police was not allowing even a peaceful protest.

Chief Minister B S Yediyurappa said he instructed police to exercise restraint while handling agitations and alleged that Congress was behind the protests. To allay fears among the Muslims, he said protecting their interests was the government's responsibility. He held a meeting with senior police officials and reviewed security arrangements.

Protests were also held at Hubballi, Kalaburagi, Hassan, Mysuru and Ballary in Karnataka where police detained demonstrators for violation of prohibitory orders.

The order bans assembly of more than four people.

In Hyderabad, hundreds of protestors, including activists of Left parties and about 50 students of the University of Hyderabad were taken into preventive custody to foil attempts to hold protests against the Act.

Police also prevented a protest rally by the Left parties against the CAA.

In Thiruvananthapuram, hundreds of activists of the Democratic Youth Federation of India, the youth wing of CPI(M) took out a protest march to Raj Bhavan here.

Activists of SFI, the students wing of the CPI(M), took out a march to the Kannur railway station in north Kerala against the implementation of the Act.

Tanur Municipality in Malappuram witnessed high drama on Thursday as some of the councillors tried to present a motion against the CAA, which was objected to by the BJP members saying the issue was under the consideration of the court.

In Tamil Nadu, protests were held in Chennai, Tirupur, Tiruchirappalli, Nagercoi and Vaniyambadi.

Outifts, including Makkal Adhikaram, an ultra Left outfit, and CPI were among those who held protests.

In Chennai, noted Carnatic music vocalist T M Krishna, and Tamil actor Siddarth were among the hordes of people from different walks of life who participated in a demonstration against the CAA.

The demonstration, organised by a collective of civil society members, Left liberals and volunteers of outfits including the Jamaat-E-Islami Hind and NGOs saw high pitched slogans against the BJP-led Centre, the RSS, and Hindutva.