One and a half decade after Vajpayee demitted office, he is today remembered as a leader who took forward India's telecom revolution, laid the foundation for massive infrastructure projects - road, rail and air, in a size and scale that matched the Nehruvian-era. 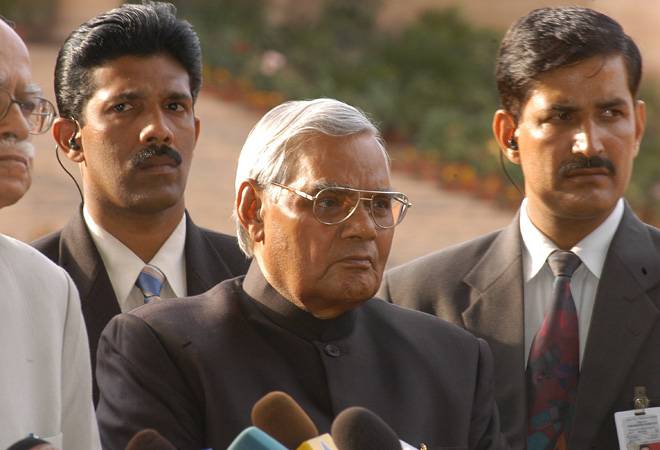 'India Shining' may have been a failed marketing slogan for Lok Sabha elections in 2004, but former Prime Minister Atal Bihari Vajpayee, an administrator and orator par excellence who led that campaign after running the Bharatiya Janata Party (BJP)-led National Democratic Alliance (NDA) government for five years, did indeed lay the foundation stone for several things that took India forward in the later years.

One and a half decade after Vajpayee demitted office, he is today remembered as a leader who took forward India's telecom revolution, laid the foundation for massive infrastructure projects - road, rail and air, in a size and scale that matched the Nehruvian-era. He is also known for introducing social development schemes, including making education a fundamental right. He charted a new diplomatic path by encouraging people to people engagement with Pakistan (Delhi-Lahore bus route), declared India's nuclear power capabilities to the world and kick started a disinvestment process that saw privatisation of non strategic public sector enterprises. It was not without reason Prime Minister Narendra Modi, after inaugurating the Magenta Line of Delhi Metro recently, observed that the first traveller in Delhi Metro train was Atal Bihari Vajpayee. The first line of the capital city's life line was inaugurated during Vajpayee's time. In fact, Delhi Metro today is a beacon of the country's urban mobility. In terms of roads too, the much talked about Golden Quadrilateral Scheme, which linked the four metro cities Delhi, Mumbai, Kolkata and Chennai was his dream. The other grand vision was that of a network of all weather roads that criss-cross villages across India. Pradhanmantri Gramin Sadak Yojna helped movement of farm produce, and improved access to healthcare and education.

The mobile revolution started during his time as NDA government decided to slash call rates and thereby bring in more competition in the telecom industry. The rest is history. If India's telephone penetration rate was in single digits before Vajpayee's New Telecom Policy, mobile connectivity has taken off in such a manner that it is today the key pillar of the Central government's JAM (Jandhan, Aadhaar, Mobile) plan for financial inclusion. Despite its increased thrust on spending, Vajpayee was keen on managing India's fiscal deficit arithmetic. In fact the Fiscal Responsibility Act was introduced during his time.

Vajpayee's achievements did not happen in a conducive atmosphere. Unlike the absolute majority BJP government enjoys today, Vajpayee had steered a coalition government that depended on its NDA partners. Neither was the global economy, nor India's security threats very friendly. Gulf war was troubling global markets, spooking oil prices, and India had to fight a war in Kargil to buy peace.

The best witness to Vajpayee's performance as the India's Prime Minister will be his predecessor Manmohan Singh. When he followed Vajpayee as Prime Minister in 2004, India's GDP growth was inching towards double digits, inflation was under control and India was, at least in terms of numbers, shining.

OYO in talks with SoftBank for funding, valuation may touch $4 billion