As Maharashtra heads for its 14th state assembly election on October 21, the incumbent Bharatiya Janata Party (BJP) has released its manifesto promising to provide 5 crore jobs over the next five years and houses for all by 2022. Another prominent promise of the party includes making Maharashtra a $1 trillion economy. It has also said that it will seek prestigious Bharat Ratna for social activists and social reformers Mahatma Jyotiba Phule and Savitribai Phule and Indian independence activist Veer Savarkar. The BJP aims to create Rs 16,000 crore worth Marathwada drinking water grid project over the next five years if it comes to power in the state. Besides assuring to invest up to Rs 5 lakh crore in infrastructure projects in the state, the party has also promised to create a separate maintenance department to keep a tab on ongoing highway projects.

Only time will tell if the BJP will come to power and if it does how many of these campaign promises it will keep.

Meanwhile, we have compiled data to compare how the economy of the state has performed under the last two governments - the incumbent BJP that came to power in 2014 and Indian National Congress (INC) that ruled the state for over a decade until 2014.

The state's economy has seen a stable growth over the past five years. On an average, the gross state domestic product (GSDP) grew at 7.6 per cent during FY15-18, similar to the growth during FY10-14 (based on the spliced series). The agriculture sector in Maharashtra has been under stress mainly on account of scanty monsoons and shortage of irrigation infrastructure. In terms of gross state value added (GSVA), the agriculture sector has registered a growth of 0.1 per cent on an average during FY15-18 as against 6.3 per cent during FY10-14. The state's economy is mainly driven by services and industrial sector that together contribute nearly 90 per cent to the GSVA, says a CARE Ratings report. 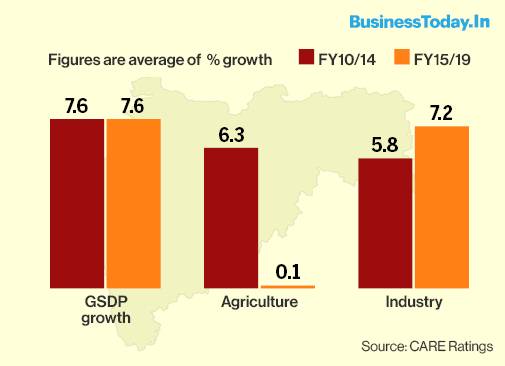 Increase in investments in new and stalled projects In 2010, the fiscal deficit to GSDP was at 3.1 per cent, surpassing the Fiscal Responsibility & Budget Management (FRBM) target of 3 per cent. Thereafter, the ratio of Maharashtra has been below 3 per cent since FY11 within the FRBM norms. Between FY11 and FY14, the fiscal deficit of the state reduced considerably and was maintained below 2 per cent.

During the span of five years of 13th state assembly (from FY15 to FY19), fiscal deficit was lower than 1.5 per cent of the GSDP on two occasions (in FY16 and FY18). The state has been adhering to the debt-to-GSDP norm of 25 per cent as had been prescribed by the 14th Finance Commission. It has moderated from 16.3 per cent in FY14 to 15.6 per cent in FY19 mainly due to higher growth in nominal GSDP. 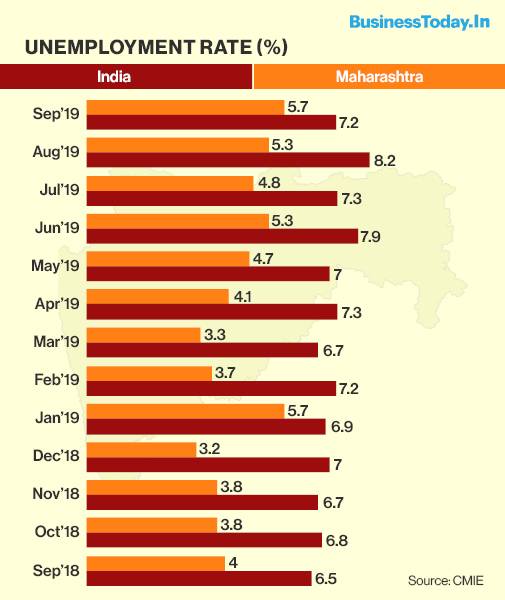 The state's economy has been growing at a steady pace with an impressive growth in industrial sector during the tenure of 13th state assembly (FY15-19). Despite sustained revenue deficit over the years, the fiscal deficit has remained well within the FRBM target while the debt levels are also sustainable, points out the report. The infrastructure has also seen marginal improvement in terms of road, railways, telecom and power. Although new investments are growing, so are the stalled projects. It is a cause of concern.