Congress General Secretary and eastern Uttar Pradesh in-charge Priyanka Gandhi Vadra will cover a distance of 140 kilometers during her 3 yatra by boat, from Chhatnag in Prayagraj to Assi Ghat in Varanasi. 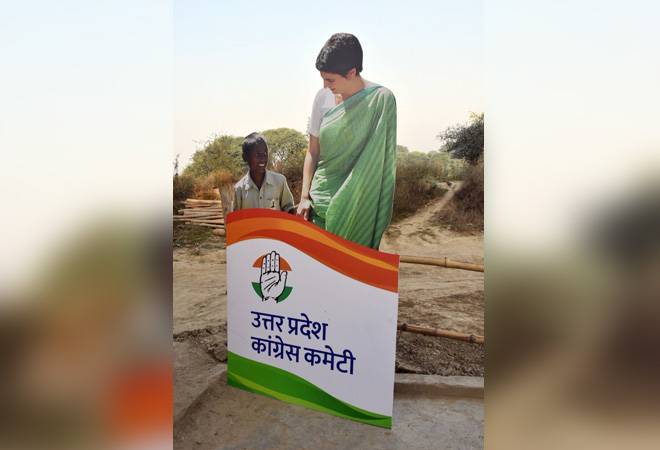 The Congress General Secretary will cover a distance of 140 kilometers during her 3-day yatra by boat, from Chhatnag in Prayagraj to Assi Ghat in Varanasi.

She began her 'Ganga Yatra' boat rally to Varanasi with a 'boat pe charcha' with the students from across Uttar Pradesh. Priyanka will also visit Bhadohi and Mirzapur districts before reaching Varanasi where she will visit Kashi Vishwanath temple and take part in Holi celebrations with workers.

Before beginning her 'Ganga Yatra', she offered prayers on the banks of Sangam -- a confluence of rivers Ganga, Yamuna and the mythical Saraswati.

Priyanka in a tweet on late Sunday evening recalled her memories associated with Swaraj Bhawan, where her grandmother and former prime minister Indira Gandhi was born.

"Sitting in the courtyard of Swaraj Bhawan, I can see the room where my grandmother (Indira Gandhi) was born. While putting me to sleep at night, she used to tell stories of Joan of Arc. Her words reverberate even today. She used to say -- become fearless and everything will be alright," the Congress leader said in a tweet in Hindi.

Soon after her arrival at the party office in Lucknow on Sunday, Priyanka said political stagnation in Uttar Pradesh had left the state's youth, women, farmers and labourers distressed and it was her responsibility to change the politics here.

"Due to stagnation in the politics of the state, youngsters, women, farmers and labourers are worried. They want to share their pain and agony, but in the noise of political arithmetic, their voice is completely absent from the policies of the state," she said in an open letter.

Gandhi said political transformation in the state was not possible without listening to the voices of the people and sharing their pain.

"Hence, I have come to your doorstep for a 'sacha samwaad' (genuine conversation). I assure you that based on the conversation with you, we will bring transformation in politics. We will move towards solving your problems," she said in the letter.

The Congress leader said she would reach out to people through various means of transportation, including waterways, buses, train and 'padayatra' (on foot).

"River Ganga is a symbol of truth and equality. It is also a symbol of our 'Ganga-Jamuni tehzeeb' (cross culture). It does not differentiate among people. Gangaji is the lifeline of Uttar Pradesh and with her support I will reach you," the letter read.

Polling will be held in seven phases in Uttar Pradesh from April 11 to May 19. Results will be announced on May 23.