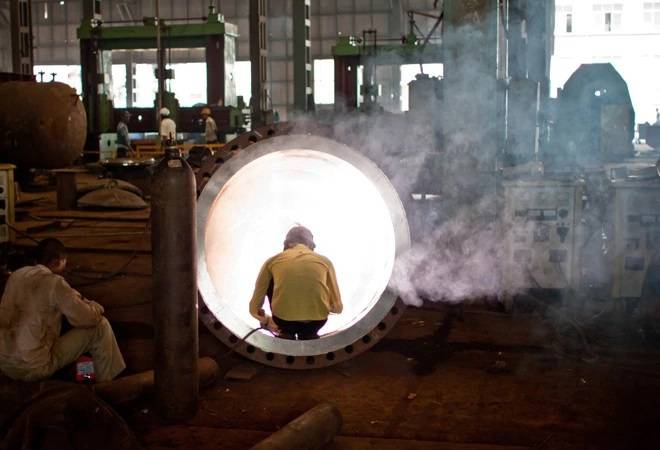 The industrial growth, based on Index of Industrial Production (IIP), contracted sharply by 55.5 per cent in April as majority of the industrial sector remained closed in wake of nationwide lockdown by the government to contain spread of COVID-19 pandemic. The data, however, is not comparable with previous months and the figures will be revised in the following months.

"In view of the preventive measures and announcement of nation-wide lockdown by the government to contain spread of COVID-19 pandemic, majority of the industrial sector establishments were not operating from the end of March, 2020 onwards. This has had an impact on the items being produced by the establishments during the month of April, 2020, where a number of responding units have reported NIL production. Consequently, it is not appropriate to compare the IIP of April, 2020 with earlier months and users may like to observe the changes in IIP in the following months. These Quick Estimates will undergo revision in subsequent releases as per the revision policy of IIP," the Ministry of Statistics and Programme Implementation (MoSPI) said.

Also Read: Centre not to measure retail inflation for lockdown months of April, May

"Due to the lockdown there has been a contraction and shrinkage in coal, manufacturing and electricity production leading the IIP index to sharply fall to 56 in April," said Rahul Gupta, Head of Research- Currency, Emkay Global Financial Services.

As per use-based classification, the indices stand at 92.3 for primary goods, 7.7 for capital goods, 42 for intermediate goods and 21.7 for infrastructure or construction goods during the month under review.  Further, the indices for consumer durables and consumer non-durables stand at 5.5 and 89.4, respectively, for the month of April.

Centre not to measure retail inflation for lockdown months of April, May