Delhi recorded 2,024 new coronavirus cases on Sunday, the highest single-day spike in cases in August, taking the tally to over 1.73 lakh, while the death toll rose to 4,426 with 22 more fatalities 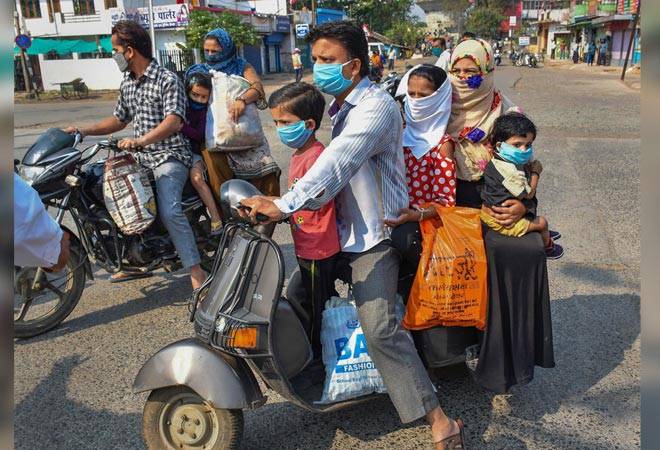 Medical experts have flagged that many people not wearing masks and violating social distancing norms have contributed to the sudden spurt in novel coronavirus cases in Delhi in the past few days, cautioning that the situation should still be treated as a "health emergency". From doctors at leading hospitals to officials of nationwide testing labs, all concurred that a "sudden degree of complacency" has crept in the psyche of the masses, especially the youth, who feel that "all is back to normal" since lockdown has eased.

"We are seeing the younger population mostly starting to go out, posting pictures on social media about sitting at a cafe or a restaurant, which is quite a dangerous trend," Rajiv Gandhi Super Speciality Hospital (RGSSH) Director B L Sherwal told PTI. "This sends out a wrong message to other people that things are okay now as economy is also slowly reopening," Sherwal said.

The RGSSH is one of the major dedicated COVID-19 facilities run by the Delhi government. "A large number of people going out of their homes, either not wearing a mask or wearing it only on their chin. That can immediately spread infection and that is one of the reasons we seeing a spike in cases in the last several days," Sherwal said, adding that they "should not lower their guard".

Delhi recorded 2,024 new coronavirus cases on Sunday, the highest single-day spike in cases in August, taking the tally to over 1.73 lakh, while the death toll rose to 4,426 with 22 more fatalities. On Saturday, there were 1,954 new cases. On preceding two days, the number of infections were in the excess of 1,800.

Suranjit Chatterjee, senior consultant of internal medicine at Apollo Hospitals said opening of the economy had led to increase in contact among people and that has also contributed to the rise in the number of infections. "Cases had begun to come down in Delhi in July and economy is being slowly opened up since June, because one cannot keep economy locked indefinitely.

"However, that does not mean, people should not treat the situation anymore as a health emergency. A degree of complacency has set in among a section of people that 'all is fine now'," Chatterjee said. He warned that the second wave during the Spanish Flu of 1918 had come after a gap of a few months, adding that people should, therefore, listen to experts and adhere to all safety norms to contain the virus.

Mahesh Verma, a doctor and head of a Delhi government panel set up earlier to strengthen the preparedness of hospitals to battle COVID-19, said multiple factors could be responsible for this spike. "Laid-back attitude of many people in adhering to safety and social distancing norms is one factor," he told PTI. "Also, there is another school of thought and there have been some evidence that a less virulent strain of the virus could be in circulation, which leads to less deaths but more cases."

Opening up of the economy, too, has led to people interacting more and a greater chance of spreading infection, Verma said. Various sectors are slowly getting permit to resume operations while strictly adhering to coronavirus-safety protocols. After being closed since March 22, the Delhi Metro has received the nod from authorities to resume services from September 7 in a "calibrated manner" as per the new guidelines for Unlock 4.0 issued by the Centre, officials had said on Saturday.

Dr Meenu Bajpai of the plasma bank set up in July at state-run Institute of Liver and Biliary Sciences, said people would have to learn to be "socially responsible" too. "We are literate, but we, as a society, sometimes don't behave responsibly, as it is seen in not observing civic sense and many educated people throwing garbage in the open," Bajpai said.

This is the time that we have to show the true value of our education and listen to experts and behave responsibly, according to Bajpai. She cautioned that "eating and drinking socially" in the time of pandemic had to be a "strict no-no", saying that to consume something, one would have to pull the mask down and that is "not advisable".

Max Healthcare group medical director Sandeep Budhiraja cautioned the youth to not get swayed in by the lure of the social media, as many of those are putting out pictures of going out and socialising in cafes and restaurants, with or without wearing masks. "Yes, social media does affect the psyche of people and behaviour of people," he said, and cautioned that "a young person may get infected and recover from COVID-19, but if they unnecessarily go out and socialise, they run the risk of spreading it to older people around them, including their parents and grandparents".

Medical experts in Delhi also flagged the spread of COVID-19 cases to semi-urban areas and villages on the outskirts of Delhi. "A pandemic that has originated from outside generally follows this trajectory, from foreign countries to another country, then to bigger cities, and from urban areas to rural areas," Sherwal said. Dr Lal Path Labs executive chairman Arvind Lal cautioned that people should not go out unless extremely necessary, as "they may catch infection from asymptomatic ones". "We are still living in a health emergency, we should not forget that," Lal said.