Taking to Instagram, the actor announced her decision, stating her "slate of work" as the reason for quitting the post Deepika Padukone has stepped down as the chairperson of Mumbai Academy of Moving Image (MAMI). Taking to Instagram, the actor announced her decision, stating her "slate of work" as the reason for quitting the post.

Deepika took over the position in 2019, replacing filmmaker Kiran Rao. The Chhapaak actor further mentioned in her post that she couldn't give full attention to MAMI due to her work commitments and that she won't be able to give the festival "undivided focus".

"Being on the board of MAMI and serving as Chairperson has been a deeply enriching experience. As an artist, it was invigorating to bring together cinema and talent from all over the world to Mumbai, my second home. I have come to realise, however, that with my current slate of work, I will be unable to give MAMI the undivided focus and attention it requires," Deepika said in the note.

The 35-year-old actor added that she was departing from MAMI knowing that the festival would be in "the best hands possible".

"I depart knowing that MAMI is in the best hands possible and that my bond and connection with the academy is one that will last a lifetime," she added. 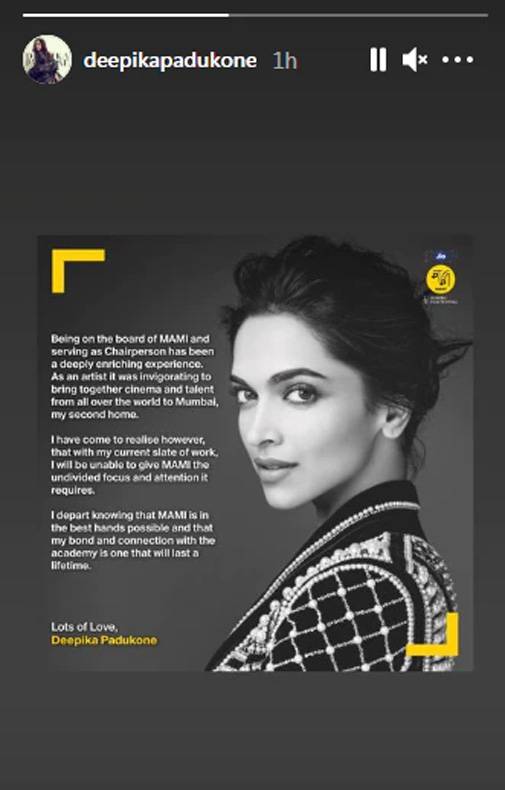 She would also collaborate with "Baahubali" star Prabhas for a multilingual sci-fi film and team up with Hrithik Roshan for the patriotic-action-drama "Fighter".

Last year, the organisers of Jio MAMI Mumbai Film Festival postponed its 22nd edition due to the coronavirus pandemic.

Banks to remain shut on these days this week