The leaders from nine political parties, who had flown to Srinagar this afternoon but returned within hours, lashed out at the government, questioning its claim of "normalcy" in the Valley 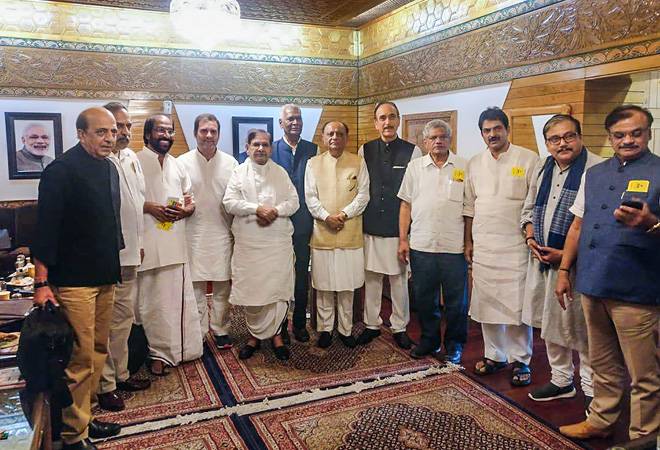 A delegation of opposition leaders, including Rahul Gandhi, which wanted to visit Kashmir Valley to take stock of the situation there after the abrogation of Article 370 provisions, was not allowed to leave Srinagar airport on Saturday by the state administration and had to return to the national capital.

The development came a day after the Jammu and Kashmir government issued a statement asking political leaders not to visit the Valley as it would disturb the gradual restoration of peace and normal life.

The leaders from nine political parties, who had flown to Srinagar this afternoon but returned within hours, lashed out at the government, questioning its claim of "normalcy" in the Valley.

The CPI(M) said that the delegation had planned to visit various parts of the state over the next few days, talking to various people and sections of the populace and shades of political opinion to ascertain the situation existing on the ground and the difficulties that they are encountering as a result of the shutdown in the Kashmir valley.

"The denial of entry to well-known leaders of recognized political parties is an outright attack on the rights of political parties to meet and address their constituents. Denying entry is day light robbery of rights guaranteed by the Constitution," the CPI(M) said in a statement.

The J-K administration had on Friday night said that the visit by politicians would be a violation of restrictions that have been imposed in many areas of the Valley.

Asked about the administration's decision to not allow opposition leaders to visit the Valley, J-K Principal Secretary Rohit Kansal told reporters Saturday evening that the priority is to maintain security and law and order at a time when the threat of cross-border terrorism continues to exist.

"They had been requested to not visit the Valley," he said.

The opposition delegation, in a letter to the District Magistrate Budgam, termed as baseless the objections to the delegation's movement outside Srinagar airport and the apprehensions expressed in his order.

"We are here at the public invitation of the honourable Governor who asked us to visit and see for ourselves the peace and normalcy that prevails. We are responsible political leaders and elected representatives and our intentions are entirely peaceful and humanitarian," the letter signed by the delegation members said.

CPI general secretary D Raja who was part of the delegation said that the fact that they were denied entry into Srinagar showed that the government was "lying" about the "normalcy" in Jammu and Kashmir.

"We were asked to go back after we were shown an order. We had gone there on the invite of the governor and despite that we were asked to return. Where is the normalcy that the government promised?" asked Raja.

The letter stated that the "detention" of the leaders was "undemocratic" and "unconstitutional" and denial of movement in Srinagar amounted to "violation of fundamental rights".