Delhi government's expenditure on subsidising electricity tariff for domestic consumers has gone up by nearly 6 times since 2014-15; state's own tax revenue as percentage of GSDP, which has been falling for the past five years, is lowest among its neighbours Delhi's economy has grown by 1.5 times in terms of per capita GSDP over the past five years

With Delhi set to vote on Saturday, around 1.4 per cent of India's population will decide who deserves a chance (or a third chance) to rule the National Capital Territory for the next five years. While the wait will not be longer as the results will be declared on February 11, a quick health check-up of the state under the ruling Aam Aadmi Party (AAP) will help you take a more informed decision.

Arvind Kejriwal was sworn in as the Chief Minister of Delhi for the second time on February 14, 2015. The government recently released its manifesto for the assembly polls where it promised to continue with the subsidy on water and electricity tariffs, if voted back to power. Delhi government's expenditure on subsidising electricity tariff for domestic consumers has gone up by nearly 6 times since 2014-15. The gross fiscal deficit as percentage of the gross domestic product of all states put together has risen from 2.6 per cent to 2.9 between FY15 and FY19. Delhi too has seen a meagre growth of 0.1 per cent during this period. The parameter was expected to slip further to 0.7 per cent in the budgeted estimates of FY20 compared to a fall in this number to 2.6 per cent for all states. State's own tax revenue as percentage of the gross state domestic product (GSDP), which has been falling for the past five years is lowest among its neighbours. Its share has fallen from 5.4 per cent to 4.9 per cent during the same period. Delhi is the National Capital Territory and it is bordered by Haryana on three sides and by Uttar Pradesh in the east. With the growing share of taxes, Uttar Pradesh had the highest level of 9.4 per cent. 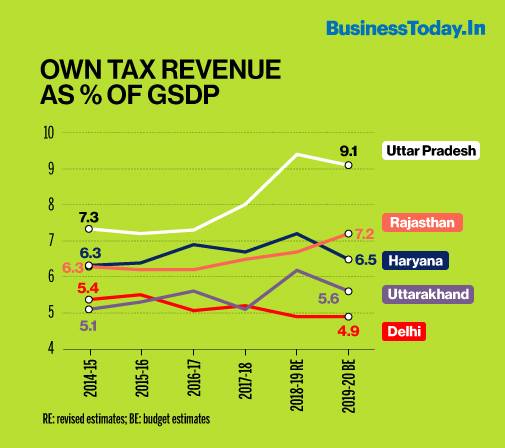 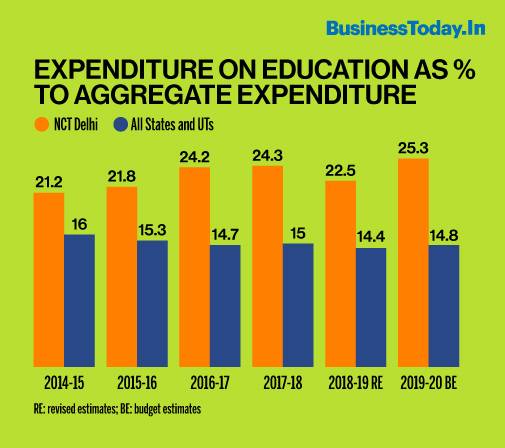