Egypt may seek $1 billion in compensation over Suez Canal blockage

The figure is an estimate of losses incurred by Egypt over transit fees, damage to the waterway during dredging and salvage efforts. The amount also includes an estimate of cost of equipment and labou 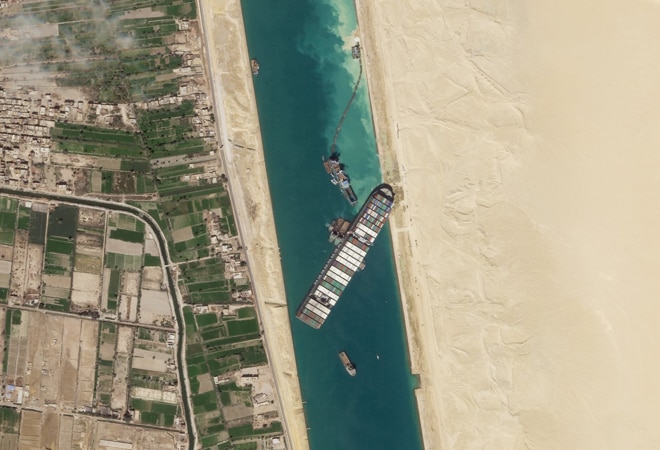 Egypt has said that it might seek $1 billion in compensation after a giant container vessel blocked the Suez Canal for almost a week. The blockage led to disruption in global trade. The figure is an estimate of losses incurred by Egypt over transit fees, damage to the waterway during dredging and salvage efforts. The amount also includes an estimate of cost of equipment and labour, said Suez Canal Authority CEO Osama Rabie to local television channel Sada Elbalad.

However, Rabie did not specify who they would seek compensation from, as mentioned in a report in Bloomberg.

"This is the right of the country. This country should get its due," he said, adding that the incident hurt Egypt's reputation.

The 400-metre-long ship Ever Given, owned by Japan's Shoei Kisen Kaisha Ltd got stuck on March 23 and was refloated six days later. The vessel's charterer, Taiwan's Evergreen Marine Corp said that it is not responsible for delays of cargo that it was transporting. "There is almost no chance that we will be sought to pay compensation," Evergreen Marine President Eric Hsieh said

According to the news agency, Shoei Kisen will discuss compensation with the Canal Authority but has refrained from giving out details now.

If the matter goes to court, then the ship and its cargo that is currently in the Great Bitter Lake might be held in Egypt.

On the morning of March 23, strong winds wedged the 400-metre-long vessel across the waterway with one end stuck at one side of the canal bank and the other almost near the other side. This prevented other vessels from passing through that part of the canal. While the incident was the result of a natural occurrence, Egyptian authorities believe that there might have been technical or human errors involved. All the members - 25 - of the crew were Indian.

Idli Amma to soon have her own house, workspace, thanks to Anand Mahindra