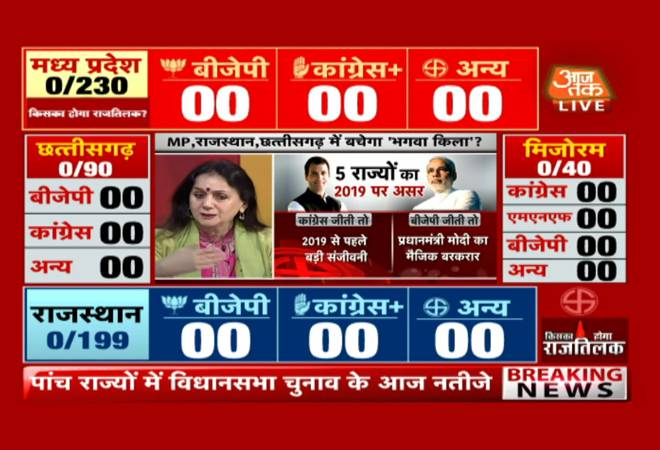 The election results for the 90 assembly seats in Chhattisgarh will be announced today with Raman Singh seeking a fourth consecutive term as chief minister. You can watch live coverage of Chhattisgarh elections results on Aaj Tak.

The Congress is aiming to stage a comeback after being out of power for 15 years in the mineral-rich state.

Exit polls say there would be a neck-to-neck fight between the two parties to clinch power in the mineral-rich state. Raman Singh will defend his Rajnandgaon seat against Congress' Karuna Shukla, the niece of former prime minister late Atal Bihari Vajpayee. The Congress is aiming to win the poll under the leadership of opposition chief T S Singh Deo.

Times Now-CNX predicted 35 seats for Congress while 46 seats were seen being bagged by the BJP. According to an exit poll by India Today- Axis MY India, Congress will win the Chhattisgarh election 2018 with clear majority and oust the ruling Bharatiya Janata Party (BJP). While the Congress is seen winning at least 55 to 65 seats in Chhattisgarh election 2018, the Raman Singh-led BJP may manage to bag 21-31 seats out of 90 seats.

In case of a hung assembly, coalition between former CM Ajit Jogi's Janata Congress Chhattisgarh (J), Communist Party of India (CPI) and Mayawati-led Bahujan Samaj Party (BSP) could emerge as the kingmaker with exit polls predicting between three to eight seats for the party. Ajit Jogi served as the first chief minister for three years since 2000 when the state came into existence.

The majority mark in the Assembly is 46.