Health experts have long been dumbfounded by the root of the encephalitis outbreak, commonly known as brain fever, in Bihar's Muzaffarpur district 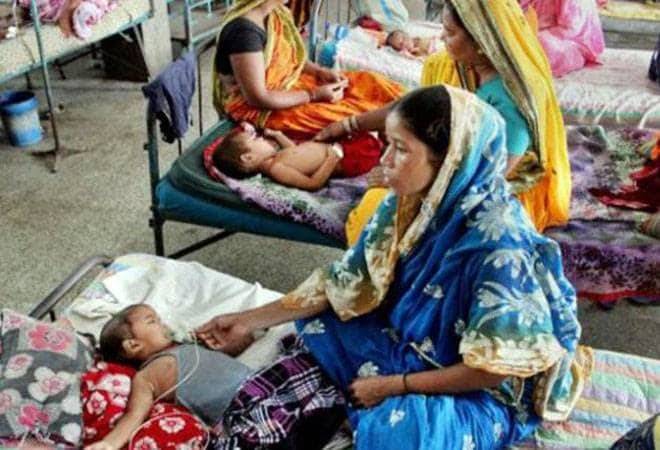 More than 110 children in India, most from poor rural families, have died this month from encephalitis.

More than 110 children in India, most from poor rural families, have died this month from encephalitis, a type of brain disease that has afflicted the eastern state of Bihar for more than two decades.

Health experts have long been dumbfounded by the root of the encephalitis outbreak, commonly known as brain fever, in Bihar's Muzaffarpur district.

Recent studies have suggested that natural toxins in lychees could harm undernourished children by blocking their ability to produce enough blood sugar, which can lead to death.

The link to the fruit, however, is inconclusive, said Alok Ghosh, the Muzaffarpur district magistrate, who said that in about half of the more than 400 known cases of encephalitis, the children had not consumed lychees.

Three medical sources at the Sri Krishna Medical College and Hospital, where some 95 patients have died, said they thought serious dehydration was likely to blame.

Encephalitis is an inflammation of the brain, caused by any one of a number of viruses.

Early symptoms can be similar to those of flu, with patients suffering from high temperatures or headaches. But symptoms can worsen within hours, and can include serious complications like seizures, paralysis and coma.

In Bihar, children were typically taken to hospital with fevers.

HOW COULD LYCHEES CAUSE SICKNESS?

Researchers who conduced a study of 390 children who fell sick in 2014 in Muzaffarpur said that lychees contained hypoglycin A, an amino acid that can disrupt metabolism, lowering blood sugar levels. That can trigger hypoglycaemia, and in extreme cases, death.

"The synergistic combination of (lychee) consumption, a missed evening meal, and other potential factors such as poor nutritional status, eating a greater number of litchis, and as yet unidentified genetic differences might be needed to produce this illness," the researchers said in their study, which was published in the Lancet in 2017.

Retired virologist T. Jacob John also raised the possibility that encephalitis cases in Muzaffarpur could be associated with lychees in a 2014 study published by Indian science journal Current Science. Muzaffarpur is a major hub for growing lychees, which ripen at this time of year.

Doctors and officials are testing children for a variety of conditions and many are divided on the cause of the disease.

But dehydration as a heat wave sweeps India could be to blame, according to medical staff in Muzaffarpur.

"In my observation it is nothing but an epidemic of heat stroke," said Gopal Shankar Sahni, the head of the Sri Krishna Medical College and Hospital's paediatric department.

"The child is hypoglycaemic and if they eat them it gets worse," said Ravikant Singh.

HOW ARE AUTHORITIES REACTING?

Officials are scrambling to contain the outbreak, but victims' relatives say poor hospital facilities have allowed the death toll to balloon.

Two lawyers have filed a petition to the Supreme Court criticising government "inaction", citing an inadequate number of doctors and hospital beds, according to a report by Reuters partner ANI.

Health Minister Harsh Vardhan has sent special teams of paediatricians and paramedics to Bihar, and also made 10 ambulances available.

US to India: Store data in country? Get ready for H1-B visa caps!

Chennai water crisis: TCS, Wipro, other firms cut back on water use as taps run dry