BJP ministers have strongly reacted to Rahul Bajaj's "atmosphere of fear" remarks. Finance Minister Nirmala Sitharaman, who was a part of the panel, comprising Home Minister Amit Shah and Commerce Minister Piyush Goyal, addressed by Bajaj, tweeted later that there's always "a better way to seek an answer than spreading one's own impressions".

She also added that such remarks could hurt national interest. "Home Minister @AmitShah answers on how issues raised by Shri Rahul Bajaj were addressed. Questions/criticisms are heard and answered/addressed. Always a better way to seek an answer than spreading one's own impressions which, on gaining traction, can hurt national interest," Sitharaman said. 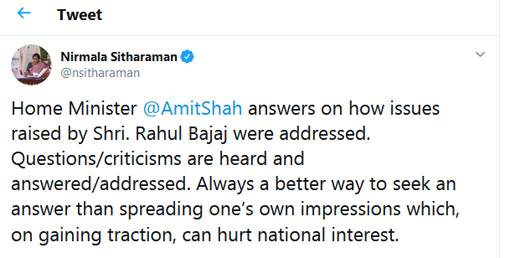 Junior minister in the finance ministry, Anurag Thakur said the BJP would never be burdened by "fear of false narratives". "Fact: Mr Bajaj a respected industry leader, stood up and asked his question to HM Sh @AmitShah. Fact: HM answered all aspects of the question. Fact: BJP will continue to welcome constructive criticism & never be burdened by the "fear" of false narratives," he tweeted. Union minister Hardeep Singh Puri also indirectly accused Bajaj of weaving "fake narratives". He termed such statements as "indiscipline". "There are societies in the world which are governed by fear, but a society where citizens can weave fake narratives & hurl invectives at the govt cannot be classified as one governed by fear, it is a society characterized by a fair dose of indiscipline," he tweeted.

Another Congress spokesperson Abhishek Singhvi also said, after ages "someone from the corporate world, all of whom preach a lot to the opposition, has the courage to speak some truth to power".

Senior Congress leader Jairam Ramesh tweeted: "One of the most famous taglines in the Indian corporate ad industry has been 'You just can't beat a Bajaj'. Amit Shah has discovered that you just can't silence a Bajaj as well. Hamara Bajaj ne band baja diya!".

Bajaj at an award function on Saturday in Mumbai had said there was an "atmosphere of fear" and people were afraid to criticise the government and did not have the confidence that the government would appreciate any criticism.

Echoing Bajaj, Biocon MD Kiran Mazumdar Shaw said the Modi government didn't want to hear "criticism". She urged the government to reach out to industry to find solutions. "Hope the govt reaches out to India inc for working out solutions to revive consumption n growth. So far we are all pariahs n govt does not want to hear any criticism of our economy," she tweeted.