Only one of the two carriageways on the Noida Link Road (also known as the Chilla road) was open, allowing commuters coming from Delhi to enter Uttar Pradesh via Noida 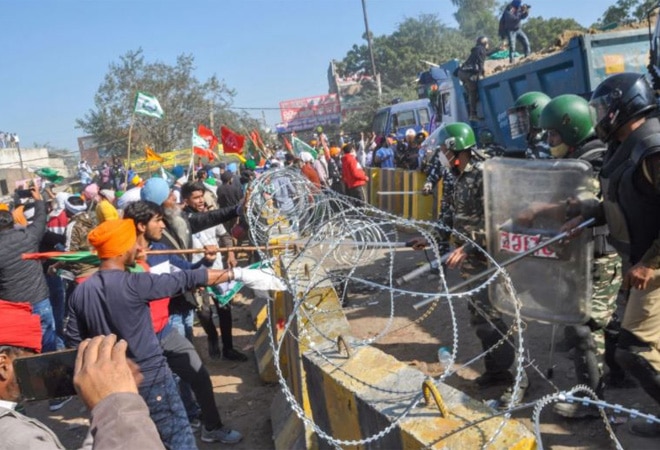 Vehicular movement remained obstructed on a key road connecting Noida and Delhi on Thursday in view of the farmers' protest at the national capital's border for the third day in a row, officials said. Only one of the two carriageways on the Noida Link Road (also known as the Chilla road) was open, allowing commuters coming from Delhi to enter Uttar Pradesh via Noida, they said.

The other side of the road where the protesting farmers are staying put remains closed to prevent any vehicular movement from Noida to Delhi. The Noida Traffic Police had issued an advisory informing people about route diversions on Thursday and suggested them to take the DND or the Kalindi Kunj routes instead of the Noida Link road to reach Delhi.

Some farmers continued their protest at the Delhi-Noida border amid security deployment, with some of them sitting on a demonstration at the Dalit Prerna Sthal near the Chilla border on Thursday morning. Deputy Commissioner of Police, Noida, Rajesh S said, The law and order situation is under control although some farmers are still continuing their protest.

Hundreds of farmers are currently staying put at Delhi's borders with Haryana and Uttar Pradesh in protest against the Farmers' Produce Trade and Commerce (Promotion and Facilitation) Act, 2020, the Farmers (Empowerment and Protection) Agreement on Price Assurance and Farm Services Act, 2020 and the Essential Commodities (Amendment) Act, 2020.

They have expressed apprehension that these laws would pave the way for the dismantling of the minimum support price system, leaving them at the "mercy" of big corporations. However, the government has maintained that the new laws will bring farmers better opportunities and usher in new technologies in agriculture.